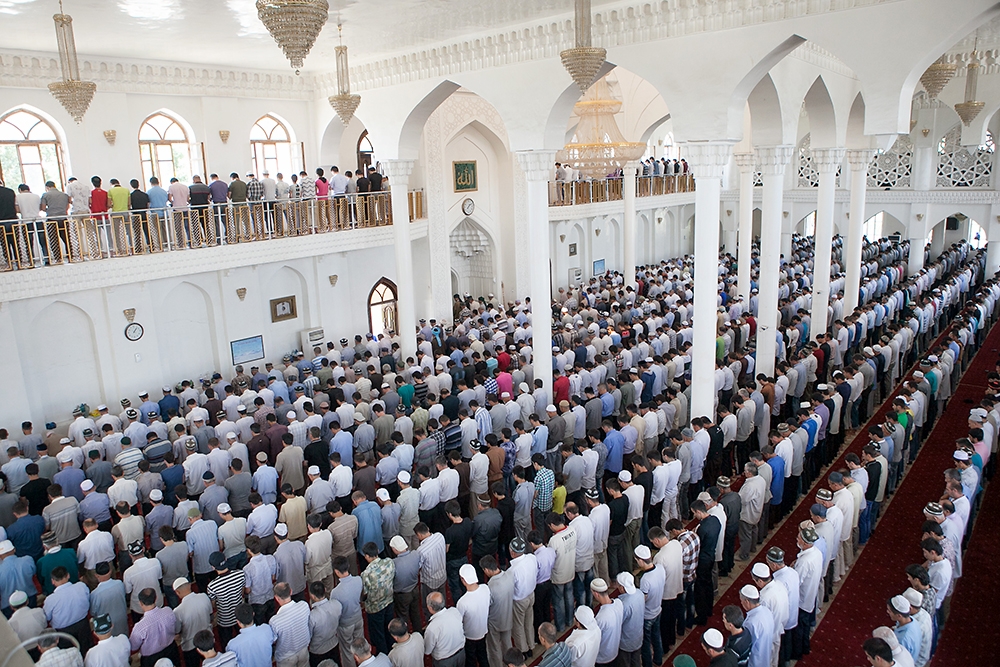 Men pray at the Haji Yacoub Mosque in Dushanbe in July 2012. Three days ago, imams across Tajikistan read a sermon drafted by the government that called on the faithful to demand the authoritarian government ban Tajikistan’s largest opposition party, the Islamic Renaissance Party of Tajikistan (IRPT). (Photo: David Trilling)

The Islamic Renaissance Party (IRPT) helped ensure peace at the end of Tajikistan’s devastating civil war in the mid-1990s. But Rahmon has steadily reneged on his promise to give 30 percent of government positions to his opponents in the war. Until a deeply flawed election early this month – which featured ballot-box stuffing and intimidation, according to international observers – the IRPT had managed to hang on to a couple of seats in parliament.

Official election results showed that the IPRT failed to clear the 5-percent threshold required to win seats in parliament. Unofficial estimates indicated that the actual share of ballots cast for the IRPT was much higher than that. Yet now, after unprecedented pressure, the IRPT is out in the cold, its future uncertain.

The statement that imams read accused the party of attempting to foment conflict, while casting Rahmon as the only guarantor of peace and prosperity. “Parties that use the name of Islam blacken it. Such parties are not for the people of Tajikistan,” the statement, obtained by EurasiaNet.org, reads. It also accuses the IRPT of making “empty promises.”

“The election showed that the people do not need the Islamic Renaissance Party, as they [the IRPT] acted in a way that is not acceptable to our people,” the statement added.

The Friday sermon is not the final word, and it may only be testing public opinion. But many believe it reflects an intention to ban the IRPT – especially because it comes so soon after an election campaign that saw senior officials repeatedly attack the party. During the campaign, Chief Mufti Saidmukkaram Abdulkodirzoda told state television that the IRPT should remove the word "Islamic" from its name. Two days before the vote, imams implored voters not to support the IRPT.

With the party’s future now more in doubt than ever before, members are split over tactics.

After the imams demanded the party be banned, the IRPT’s vice chairman, Saidumar Husayni, told Dushanbe’s Asia-Plus news agency that if Rahmon’s government can prove that “the IRPT interferes with the government's plans for the prosperity of the country and providing the people with a decent life, then we will leave the political scene voluntarily.”

IRPT chairman Muhiddin Kabiri tells EurasiaNet.org that he is committed to a moderate path. “The mood is changing course in our party,” he said, “and I know that ‘patience’ is an unpopular word in our party. Some are tired of waiting. But I am grateful to the people and our supporters that, despite all the pressure and provocations against our party, still continue to listen to us.”

Some agree that under such pressure, there is no other way. “If Kabiri had a different policy, the situation would deteriorate rather than improve,” said Asomiddin Abdurahmonov, a 37-year-old farmer from Qurgonteppa. “After all, the regime will not tolerate the party acting aggressively.” Nonetheless, dissent within the IRPT is mounting. Many young activists “believe that our patience has brought harm to our party,” Abdurahmonov told EurasiaNet.org.

Certainly some are disillusioned.

“I used to support the IRPT,” Dilshod Sharifov, a 21-year-old migrant laborer who works as a handyman in Moscow, told EurasiaNet.org. “But now I am angry. The regime wages a war on Islam and the party fails to stand up for Tajik Muslims.” His friend, 22-year-old Said, agrees. “The recent vote was a joke and now they are looking to ban the party. We need to act now to resist the tyranny of Rahmon’s regime,” said Said, who declined to give his last name out of fear of Tajikistan’s security services.

Their legal options are limited.

“Apparently, the regime considers the exclusion of the IRPT as a logical step in its consolidation process since the mid-2000s,” Tim Epkenhans of the University of Freiburg, author of a forthcoming book on the Tajik civil war, told EurasiaNet.org.

“The regime is squeezing the IRPT out of existence,” said Sharifov, the Moscow-based handyman. “And the [party] leadership is doing nothing. Soon Tajikistan will have no legal opposition unless we act.”

But Epkenhans thinks action from within the party unlikely. IRPT leaders are mostly businessmen these days. Kabiri himself imports juice and clothing. They “have established themselves economically and socially and therefore have too much to lose” by taking on the regime, he said.

Kabiri’s calm response to government pressure suggests that the party’s radicalization is unlikely, at least under his watch. “I know that people are very unhappy. But a political leader should not go with the crowd, he should lead the crowd,” he declared.

Whether he can keep his followers from splitting away, however, is unclear.

Disenchanted younger members like Sharifov and Said are turning their backs on the party. “A number of my friends have decided to join other movements, some with more radical agendas. We feel that the IRPT has failed us,” Said remarked.

Edward Lemon is pursuing a political science PhD in the UK. A EurasiaNet.org correspondent in Dushanbe contributed reporting.