Is Turkey Becoming a "Constructocracy"? 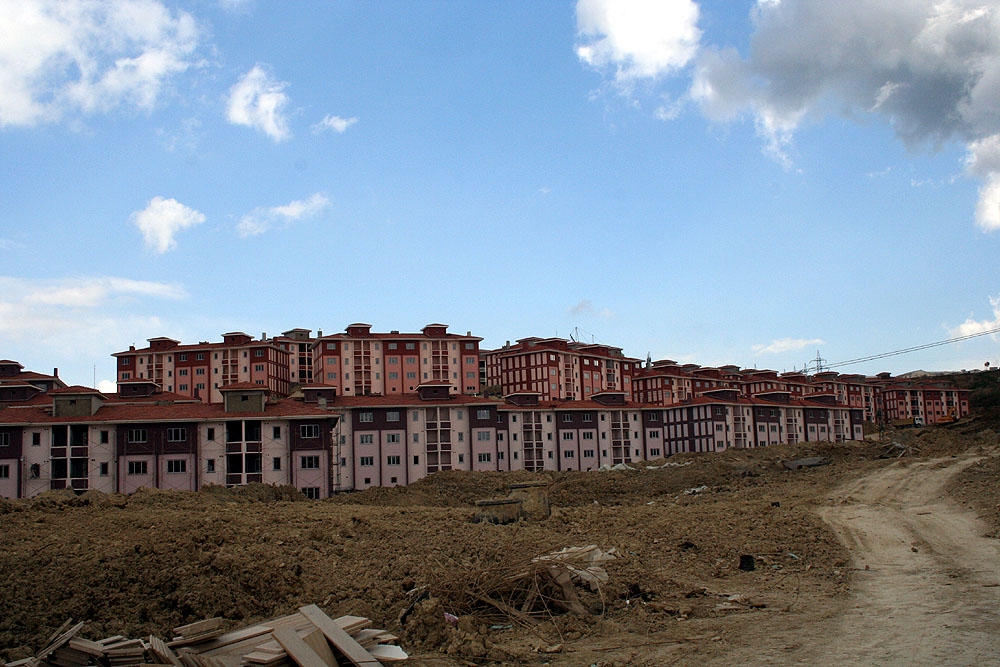 Another Crop of Turkish Apartment Buildings

Like in previous years, Turkish police and protesters this year again clashed in the heart of Istanbul after authorities blocked unions and other labor organizations from holding an event celebrating May 1 in downtown Taksim Square.

The excuse for keeping the groups out of Taksim this year was different than in the past, though. This time, authorities said, the square was too dangerous a place to be because of a massive construction project going on there that will redirect car traffic into several underground tunnels and remake Taksim in other ways.

The ruling Justice and Development Party (AKP) may have had other motives for closing off Taksim to the labor groups, many of which are fierce opponents of the government, but it's hard to deny that Taksim Square has in fact become one big construction site. Actually, all of Turkey has become a big construction site over the last decade, with cities expanding at a rapid rate and "urban renewal" projects -- most of them initiated by the government-run housing administration, a highly unaccountable body known as TOKI -- changing not only the skyline but also the social fabric of many cities.

The rapid rate of construction is now giving rise to concerns about the "cementization" of Turkey's cities, particularly Istanbul. Writes Bulent Kenes, editor of Today's Zaman, in a very good recent column:

Having emerged as one of the main engines of economic growth, the construction sector has deviated from its target of producing economical housing units for the poor and moved toward becoming the powerhouse of an economy that sits on unearned incomes and looting. In particular, the cities accommodating unique histories such as İstanbul have come to appear as cities torn by looting. In İstanbul, the city's historic silhouette has been irrevocably damaged with the skyscrapers built out of nowhere, and the gigantic shopping centers, skyscrapers and housing blocks rising amid forests are causing incurable wounds to the face of the city. I don't know who will say “stop” to this lunacy of placing high-rise buildings everywhere or when they will say it.

Like a gigantic voracious monster, the ugly concrete blocks popping out of nowhere are swallowing everything that makes İstanbul our old, beloved city. It is the greatest of all paradoxes that this is happening during the time of Prime Minister Recep Tayyip Erdoğan, whom we have come to know as a person who loves İstanbul. Historic movie theaters are being demolished; historic squares are being excavated; the hills which are symbols of İstanbul are being covered with forests of concrete buildings; and green fields are invaded by luxury houses and ubiquitous low-coast housing units.

In another Today's Zaman column, Suat Kiniklioglu, a former AKP member of parliament,  takes a look at all the malls and high-rise apartment buildings sprouting up all over Turkey and see behind it the hand of a government that had let its housing agency and related construction companies run amok. Writes Kiniklioglu:

Most urban citizens find themselves stuck in traffic more and more, subjected to increasing pollution and longing for more green than cement. Yet, in clear defiance, we see ever more projects being advertised that are destined to worsen conditions in inner cities. These increasingly problematic conditions are also testing the patience of our social fabric. Impatience, intolerance and disrespect are becoming the order of the day.

Turkey's municipalities must be reined in; otherwise, our urban existence is destined to turn into a nightmare. This is especially true for big cities like İstanbul and Ankara. Turks want more green in their cities and are increasingly offended by the rapacity of constructors and their allies in the municipalities. They long for modern cities that are livable and have well thought out solutions to traffic.

Turkish public opinion is currently focused on the Kurdish resolution process, but there is growing discontent with how our cities are being administered. The ruling party would be well advised to heed the brewing reaction to Turkey's urban challenges. “Cementization” is thoroughly detested.

In many ways, it's as if Turkey has turned into a "constructocracy," with a domestic economy driven by the construction sector and ruled by a government that seems to believe that every new big construction project only gives it more legitimacy and prestige. The AKP, for example, is moving ahead with building a third Istanbul airport, a third bridge over the Bosphorus and with what is known as the "crazy project," a proposed canal that would link the Black Sea with the Sea of Maramara and allow ship to bypass the Bosphorus. All three projects appear to be moving forward despite being of questionable value and carrying with them serious environmental concerns.

As for Taksim Square? Along with tunnels underneath, Turkish Prime Minister Recep Tayyip Erdogan is promising that the new and improved square will feature yet another mall.