Is Turkey Turning Its Back on Atatürk? 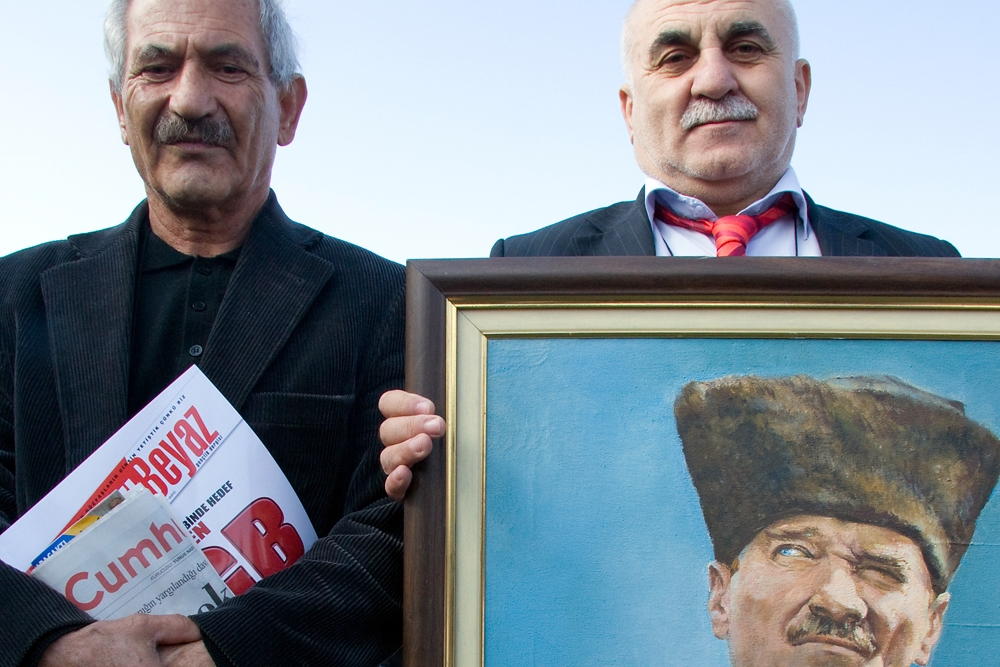 How much longer will Atatürk stay in the picture? (Photo: Jonathan Lewis)

For decades, the legacy of Mustafa Kemal Atatürk, the Republic of Turkey’s first president, has served as the country’s guiding force. Yet, amidst an unprecedented debate on the role of secularism, has Turkey begun to steer away from Atatürk?

Hero-worshipped like a Vladimir Lenin or George Washington, Atatürk, even more than 70 years after his death, remains an inescapable feature of daily life in Turkey – his portrait omnipresent, his eyes ever watching.

If “you ask for someone [among Turkey’s political leaders] who you can put in a Hollywood movie there is really only Atatürk,” commented Atilla Yeşilada, an Istanbul-based consultant for Global Source Partners, a political and economic consulting firm, and a frequent government critic.

Atatürk set in motion “a cultural revolution because he saw no value in Islamic tradition,” said Andrew Mango, the author of “Atatürk: The Biography of the Founder of Modern Turkey.”

But the Islamist-rooted Justice and Development Party (AKP) that has ruled Turkey since 2002 takes a polar opposite view, setting in motion a rethink on Turkey’s relationship with Kemalism, the radically secular ideology of Atatürk.

“I think there is a cultural war unfolding,” said Mustafa Akyol, a popular columnist for the English-language Hürriyet Daily News.

Under the AKP, Islamic organizations became confident enough to hold protests against “Our Oath,” a national pledge of allegiance that asserts Turkey’s secular identity and glorifies “Turkishness” while not acknowledging other ethnic groups living in Turkey.

The political power of the military, which traditionally saw itself as the guardian of Kemalism, has been eroded. This year, the AKP dispensed with the parade of tanks and troops that usually marked the May 19 celebrations of the start of the 1919-1923 War of Independence, a conflict fiercely pursued by Atatürk against European invaders that led to the 1923 foundation of the Republic of Turkey by the army officer and his supporters.

Erdoğan has described the national holiday as “now a symbol of change and transformation,” rather than an event that brings to mind the former “Iron Curtain countries.”

The liberalization of Turkey’s economy, which began in the 1980s and continued with the AKP, is another step away from Atatürk, who believed that the state should have a large role in the economy.

Others fear, though, that the most damaging effect of Turkey’s move away from Kemalism is the loss of the strictly secular state. Recently passed legislation makes it possible for students to receive a religious education once they are 10 years old and for parents to home-school their daughters, which could have the affect of lowering education levels for women.

Another issue is abortion, legalized under Turkey’s military regime in 1983, but currently facing a possible ban favored by the prime minister, who has called for all Turks to have at least three children. Yeşilada termed the dispute a “red line” that is seen as a symbol of the AKP rolling back the Kemalists’ sense of modernity.

Certain similarities between the style of rule of Atatürk and the AKP do seem to exist, however. Never known as a leader who suffered critics gladly, Atatürk tried to modernize Turkey “by force, if necessary,” noted Yeşilada. Similarly, many observers fear that recent arrests of scores of journalists, senior military officers and Kurdish activists show that Erdoğan, as he consolidates power, has little tolerance for opponents of his reforms.

Yet columnist Akyol maintains that, ultimately, it was inevitable that Turkey, as a democratic country, would try to redefine its relationship with Atatürk and Kemalism.

“Atatürk’s legacy ... is undemocratic,” he said. Even Turkey’s attempts to join the European Union are against Atatürk, who espoused more isolationist, nationalistic beliefs, he added.

But while Turkey starts to debate that legacy, direct, public criticism of Atatürk -- even among many practicing Muslims who dislike his belief in secularism – still remains infrequent.

The reason is that “insulting Atatürk” remains a crime in Turkey. After describing the former leader as “a dictator,” Turkish journalists Nagehan Alcı and Ahmet Altan faced charges of “insulting Atatürk,” a crime punishable with six years in jail. The cases are ongoing.

Akyol also claims to have faced criticism after he wrote a column in Turkey’s Star newspaper earlier this year suggesting that the “Our Oath” pledge, written in 1933, should be considered for removal from schools because it has “racist tones.”

What will take Kemalism’s place, however, is still unknown. But Atatürk biographer Mango suggested that the clash of religious and secular Turks over Kemalism could prove a passing phase.

“Many devout Muslims seek knowledge in the West, just as Atatürk did,” he noted. Eventually, like other countries that have faced a philosophical divide, compromise may ultimately prove the most beneficial option, leaving both sides to agree ‘to follow the path of Atatürk.’”