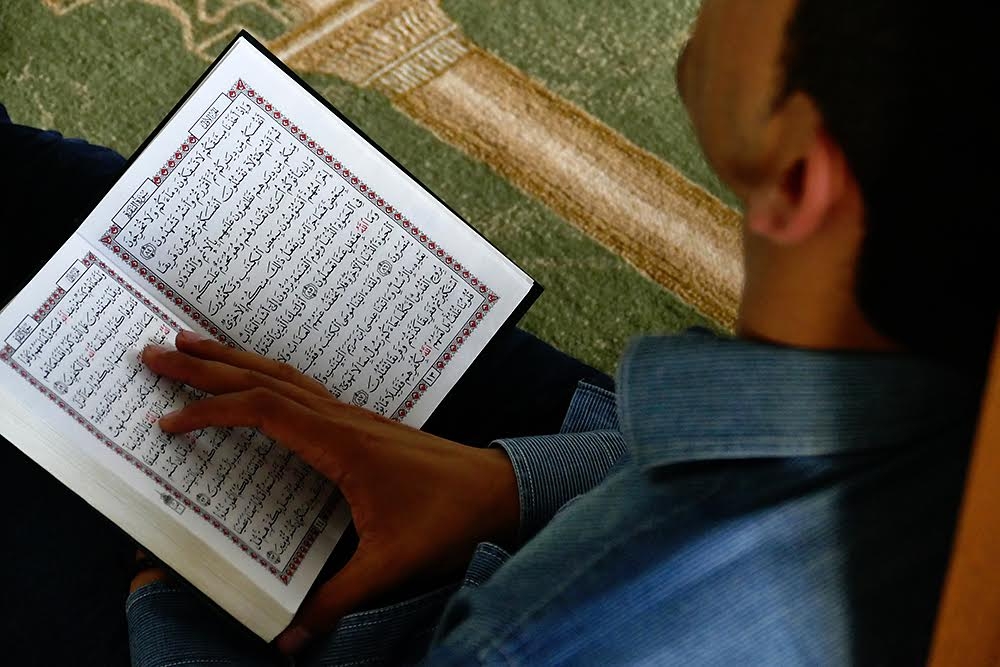 Muslim men gather during the first Friday prayers of Ramadan at a mosque in Chișinău on June 19. (Photo: Nicolae Pojoga)

Four years ago, Moldova’s Muslims, a tiny minority in this overwhelmingly Orthodox Christian country of 3.56 million, won the legal right to organize. But now, following the arrests of suspected collaborators with Islamic State, they face another daunting challenge – fighting the stereotype that Moldovan Muslims are terrorists.

On May 30, two Moldovan men were sentenced to 30 days of pre-trial detention in the Moldovan capital, Chișinău, on charges of allegedly offering refuge to “mercenaries” from Islamic State and “creating a criminal organization.” Only one of their names (Abu Israfil) has been released.

The charges came three days after Moldovan police detained two men and two women suspected of intending to travel with three children to Syria via Moldova.

One of the men, a native of Dagestan, and a 16-year-old girl originally from Chechnya were deported to Russia. A second man, a native of Chechnya with a Tajik passport, is in the custody of migration and refugee officials. The Chechnya-born woman accompanying him, who traveled to Moldova from France, remains in police custody. The status of the three children is unknown. Names for the group have not been released.

Despite these arrests, the country’s risk for ISIS activity generally has not attracted international notice. At least one ISIS militant, Abdullah al-Moldovi (Abdullah the Moldovan), is believed to hail from Moldova, RFE/RL has reported, but the country was not included in the US Department of State’s recently released world report on terrorism.

But for the country’s handful of Muslims, these arrests already have had consequences.

Marina Hasan, one of roughly 20 women who gather for worship each Sunday in a makeshift mosque in an industrial district of Chișinău, recounts how her 10-year-old son’s classmates “tell him that he and our whole family are terrorists from Syria ...”

“You always have to prove that we will not hurt anyone, even though I am also from this country,” she said with frustration.

Worshippers at the Chișinău mosque – about 200, primarily male, on Fridays – speak mostly in Romanian. Only prayers are uttered in Arabic.

“[W]e suffer more than we benefit [from these arrests] and we are stigmatized as terrorists, which is not true," complained 37-year-old Muslim Women’s League of Moldova President Natalia Tcacenco, who converted to Islam ten years ago. Poverty and “political instability” pose far greater risks to Moldova, she added.

Muslim Moldovans, estimated by believers to number several thousand, have reasons to be sensitive about the ISIS arrests, however. Until 2011, the government denied them official registration as a group. Drop-ins by police on worship services were regularly reported, as well as alleged harassment.

The Moldovan Orthodox Church, the country’s dominant Christian denomination, strongly opposed the decision to register the Islamic League, a non-governmental organization that represents the Muslim community. Some Moldovans still refer to Islam as a “sect.”

The Chișinău mosque’s 46-year-old imam, Ismail Abdel Wahhab, maintains, however, that now “nothing prevents us from showing ourselves as Muslims.” A co-chairperson of the Islamic League, Wahhab moved to Moldova from Jordan 12 years ago.

Yet Wahhab and others appear anxious to underline that the individuals charged do not reflect Moldova’s Muslim community, and that radicalism does not reflect true Islam.

“Muslim people are nice, and they do not drink, do not swear. What terrorists are we talking about?” 58-year-old Vasile Dumitru, a security guard at Chișinău’s mosque, asked rhetorically.

Tcacenco of the Muslim Women’s League takes issue with the fact that the detained women shown in television footage did not dress as observant Muslims. “Were they really Muslim?” she wondered.

Imam Wahhab says that Moldova’s Islamic League tries to guard against radicalism by building ties with other countries’ Islamic associations that focus on “religious knowledge, away from extremes and extremism.”

“Wherever we feel that fanaticism is beginning, we must stop it before it generates into something worse, as is the case of ISIS,” he commented.

The government was not available to comment about its own approach for warding off ISIS recruiters.

Many of the Muslim Moldovans interviewed believe the arrests were staged by the state for unclear reasons – a common reaction in former Soviet republics when ordinary people cannot explain events.

“When you want to cover a bigger problem, the authorities invent another problem in order to distract the public’s attention,” detailed Wahhab. “Allegedly, they are combating terrorism, but what about the bank scandal?” he asked in reference to a loan scam that cost Moldovan taxpayers 16 billion lei (over $847.46 million).

Wahhab questions why the two detained women, previously living in Norway and France, would try to reach Syria via Moldova. “Something does not add up. All I know is that all countries are receiving financial help if they are working to combat terrorism.”

“There are political interests behind these scenarios,” agreed one 36-year-old Chișinău businessman who gave his name as Mohammed.

Since the initial announcement of the arrests, police have not elaborated further or explained why the group of four suspects would have used Moldova as a halfway point for their alleged journey to Syria.

The group’s alleged interest in Moldova, however, is not unusual for such cases. In early May, British citizens Arif Malik and Sara Kiran, traveling with their four children, requested to be deported to Moldova from Turkey after being stopped in Ankara under suspicion of travel to Syria. Reasons for the request and the family’s current whereabouts are not known.

Despite repeated attempts by EurasiaNet.org, representatives of the General Police Inspectorate did not respond to requests for further comment.

Andrei Pântea, an expert on security issues at Chișinău’s non-governmental Institute for Public Policy, though, minimizes the risks from ISIS. The “dangers coming from Moscow” – a reference to neighboring Ukraine’s war with Russian-backed rebels – “are heavier than those coming from the Islamic State…,” he said.