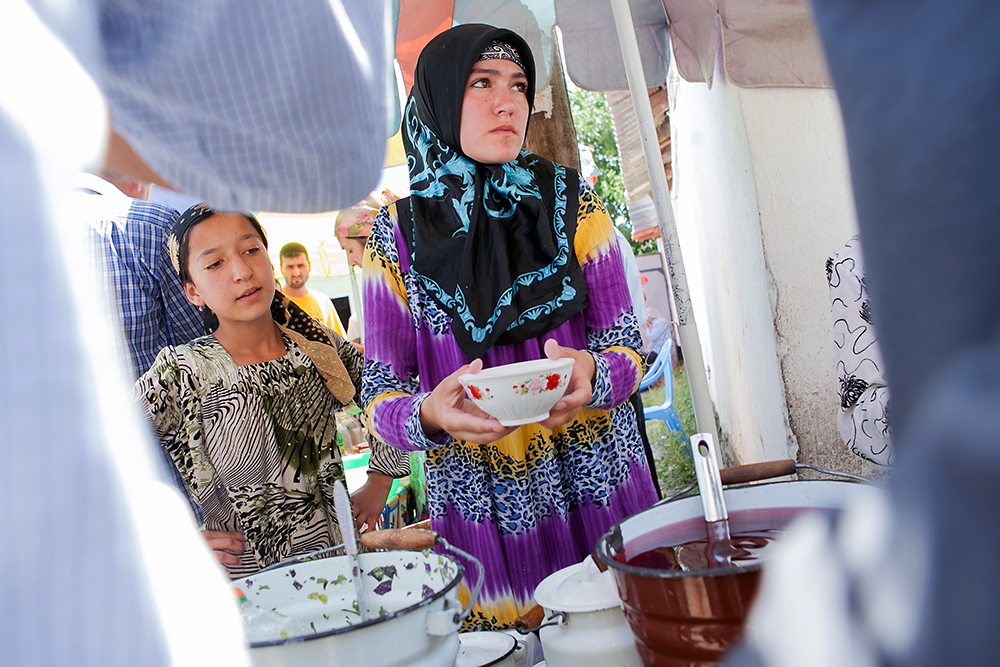 “Since ancient times our people have had beautiful women’s dresses, our girls have never worn black clothes. Traditionally, black clothes are not welcome,” Rahmon told mothers ahead of Mother’s Day, which has replaced International Women’s Day in Tajikistan and is marked on March 8. The president never specifically named Islamic hijab, but his target was clear: “Strangers” are using these clothes in their drive “to promote obtrusive ideas and want to create another new extremist trend in our country.”

Strongman Rahmon’s secular government has fought surging religious observance in the largely Muslim country since shortly after independence from the atheist Soviet Union in 1991. Authorities have harassed men with beards, closed independent mosques, and drafted imams to use their sermons to praise the president. Human rights groups say Muslims are regularly arrested on trumped-up charges that conflate faith with terrorism.

Three days after the president’s speech, state television aired a report claiming to tell the stories of sex workers who hide beneath the hijab. Women in the video – whose faces were covered by their veils – said they earned more money by wearing hijab, that the veil made them more attractive to potential clients. In case anyone missed the point, a voiceover explained that the women wear hijab because they are greedy.

“Look at this dress, what kind of threat can it be?” one merchant told EurasiaNet.org, pointing to a black dress decorated with ornaments and stones. “You can wear it at a party or special event, but they [the authorities] have banned this dress.”

He removed from his showcase all clothing that could be interpreted as Islamic. Nevertheless, the taxmen fined him 10,000 somoni (about $1750), he says. “I won’t pay this fine. There is not even an official explanation for which sins I should pay,” he said, insisting all his documents were in order.

Nasiba Kholmurodova, who sells hijabs at Dushanbe’s Saodat market, says she sells what customers demand. “When I sell something, I don’t know what a woman will do with it. I don’t tell her to buy a hijab and become a prostitute,” Kholmurodova told EurasiaNet.org.

The anti-hijab campaign appears to be causing anger. Hijab is common in Tajikistan and some are tired of the government’s ceaseless offensive against Islam.

Muso Akobirov, 45, a migrant worker who travels to Russia for seasonal work, wants his wife and daughters to wear hijab. But he complains that he and other Muslims lack a voice in Rahmon’s authoritarian system.

“This is God’s will. We cannot and have no right to refuse it. What makes it offensive is the fact that we cannot argue,” Akobirov told EurasiaNet.org. He said that if he or his friends debate the authorities, “we will be imprisoned and declared terrorists.”

Human rights lawyer Faiziniso Vokhidova says the government’s anti-hijab campaign insults “millions” of Tajiks. “We have a democratic country and everyone has the freedom to wear what they choose,” Vokhidova told EurasiaNet.org.

The first attempts to ban hijab date back to 2007, when the Education Ministry forbid women from wearing the veil to school.

The new push fits into a wider attack on Islam recently. During the parliamentary election campaign this winter, officials repeatedly compared the moderate Islamic Renaissance Party, Tajikistan’s largest opposition movement, with radicals. The party was shut out of parliament on March 1 in deeply flawed elections that featured ballot stuffing and intimidation. Now state-controlled imams are calling for the party to be banned.

Zainab Nabieva, 24, a student in Dushanbe, says she does not wear hijab, but supports others’ right to do so.

“Since our childhood we’ve been told that Tajikistan is a democratic and sovereign country. So why then tell us how to dress? This question has to be solved within the family, not instructed from high above,” Nabieva told EurasiaNet.org. “What shame to show women [involved in prostitution] on television. Are there no prostitutes among women wearing European clothes?”