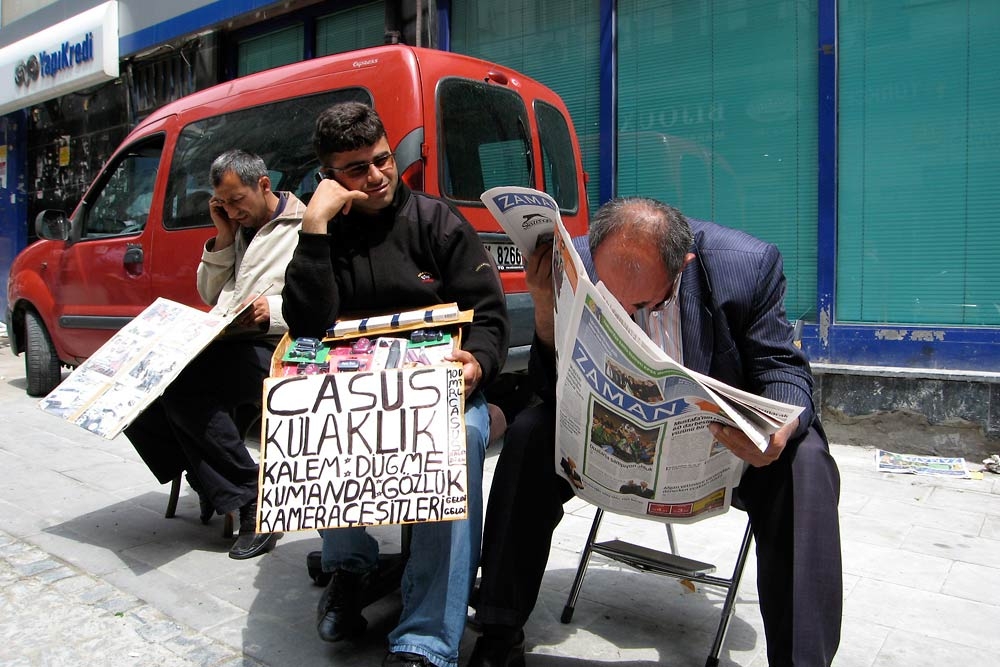 In the backstreets of Istanbul’s Tahtakale neighborhood, a bazaar district filled with shops selling cheap cell phones and computer accessories, street vendors have for years been making a living selling counterfeit prescription drugs, Viagra in particular. In recent months, though, these sellers have added some new products to their regular lineup: cheap Chinese-made listening devices that let the user eavesdrop on conversations in another room, and miniature video cameras dressed up as pens that let the average person play detective.

“Everyone is buying these products – family types, businessmen,” says one of the vendors, who would only give his name as Mustafa. “People want to know what other people are doing.”

The issue of tapping and surveillance is certainly in the air these days in Turkey. In early May, a hidden-camera video that was posted on the website of an Islamist newspaper was used to topple Deniz Baykal. He resigned as leader of Turkey’s main opposition party, the secularist Republican People’s Party (CHP), shortly after the footage was leaked.

The video purported to show Mr. Baykal, 71, a stalwart of Turkish politics who had led the CHP since 1992, literally with his pants down. The footage shows a man who appears to look like him and a woman, who resembles his former secretary, entering a bedroom together.

The Baykal video is not an isolated case, though. In the last few years, hidden camera footage and wiretaps – both legal and illegal – have been increasingly used in investigations, and as smear weapons between warring political camps in Turkey.

The use of such secret recordings is fostering a sense of paranoia in the country.

“Me and most of my colleagues do not feel that our conversations are private. Turkey has reached a point where nobody wants to talk to you on the phone, if you are a journalist. Nobody wants to give you a quote on a critical topic,” says Asli Aydintasbas, a columnist with Milliyet, a newspaper belonging to the Dogan Group, a large media conglomerate that has been a strong critic of the government.

Few seem to be immune from the bugging scare. A few months ago, members of the judiciary in Turkey were incensed when it turned out that several top judges and prosecutors had their phones tapped as part of an ongoing investigation into an alleged coup plot – known as “Ergenekon.” [For background see EurasiaNet’s archive].

In a television interview last year, even Turkish Prime Minister Recep Tayyip Erdogan said he was concerned about his phone being tapped. “What do you think? Of course,” Erdogan answered.

“Therefore I watch what I say over the phone. I'm not comfortable speaking over the phone,” Erdogan told his interviewer on Turkey's private NTV news network.

“My strong view is that what has happened to Mr. Baykal is an offshoot of an environment that has been created in Turkey over the last three or four years. Widespread and systematic violations of privacy and freedom of communication have taken place in this country,” says Sedat Ergin, a columnist with the daily Hurriyet newspaper, another Dogan newspaper.

Wiretaps have been an integral part of the “Ergenekon” investigation, but privacy advocates have accused civil servants of leaking to pro-government newspaper transcripts detailing the occasionally compromising personal conversations of suspects.

“These violations have created a psychological environment. The government has been usually complacent about such violations. They have not made this an issue and have not really taken step to deter such violations. So when there is not deterrence, people think they can engage in such violations and get away with it,” Ergin says.

Turkish officials have rejected the claims that wiretaps are being used as political weapons, saying the number of taps in Turkey is no higher than in other European countries. In the case of Baykal, government officials worked quickly to stop the online distribution of the controversial footage and asked intelligence officials to look into how it made its way online.

But critics say more needs to be done to protect the privacy of individuals. “Turkey is behind European states in terms of the protection of personal information,” says Yaman Akdeniz, a professor of law at Istanbul’s Bilgi University

“What about the poor average Turkish citizen? What if this happened to them? Would the government take the same approach as they did for Baykal? That’s why we need to have this broader discussion about privacy,” added Akdeniz, who teaches internet law.

For now, many Turks appear to be operating under the assumption that someone may be listening to what they are saying, or watching what they are doing. “Turkey is a republic of fear when it comes to privacy. This is a very dangerous situation,” said Soli Ozel, a political analyst based in Istanbul.

The tapping “instills fear in society at large that there is a big brother watching all of us,” Milliyet’s Aydintasbas said. “Privacy … should be a non-negotiable element of a democracy.”

Yigal Schleifer is a freelance journalist based in Istanbul. He is the editor of EurasiaNet's Kababistan blog.