The trade is one of the strongest links between Istanbul and the former Soviet world. 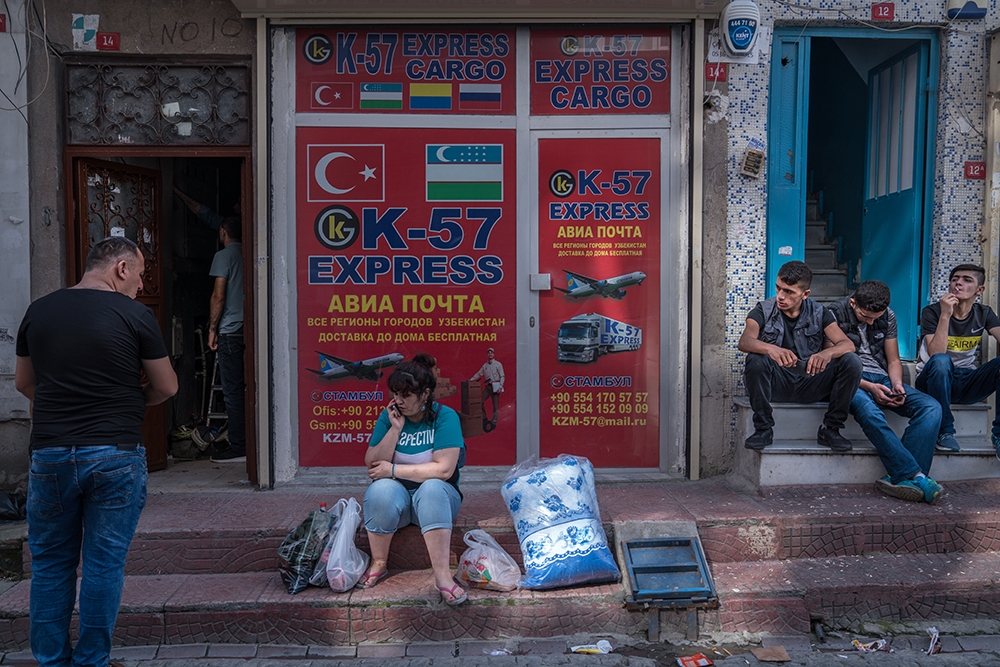 A tired shopper rests while waiting to ship her parcels. (All photos by Hilaneh Mahmoudi) 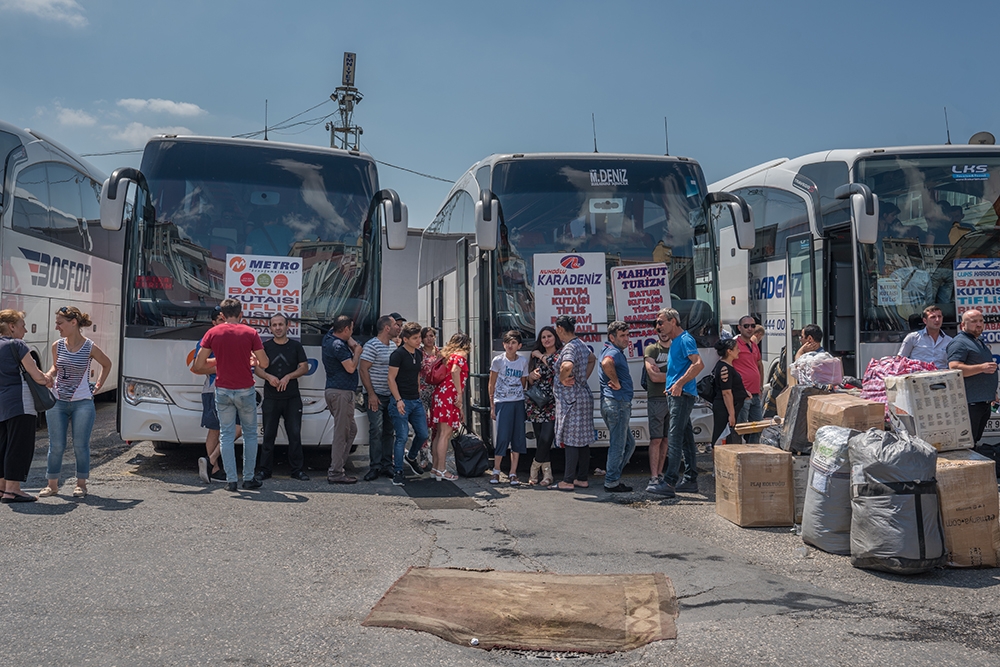 The main bus terminal in Aksaray. 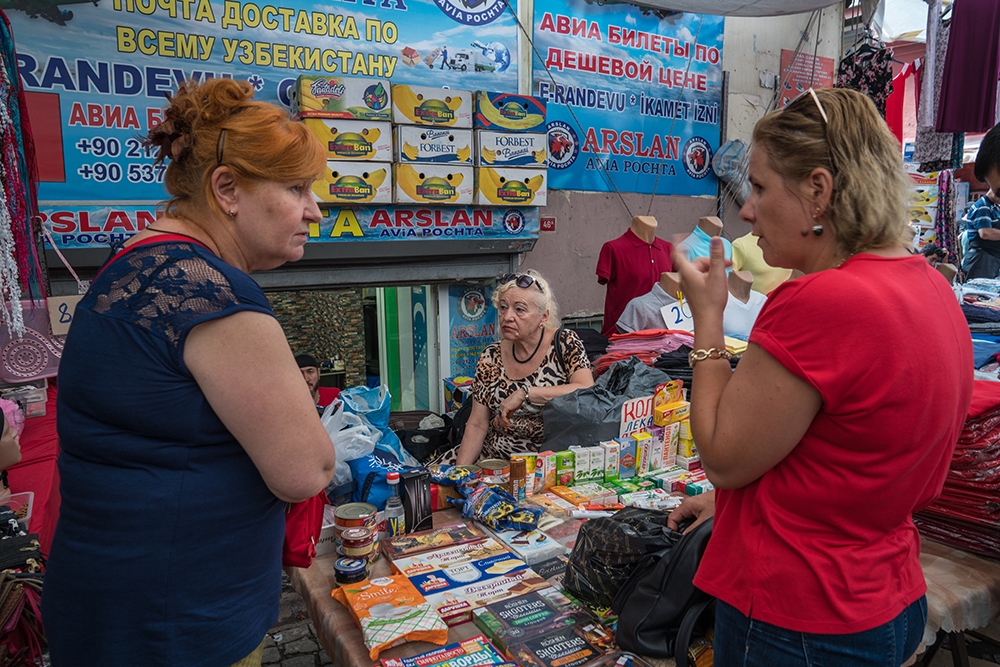 Two Moldovan ladies run a stand at the Thursday market in Kumkapı, near Laleli. 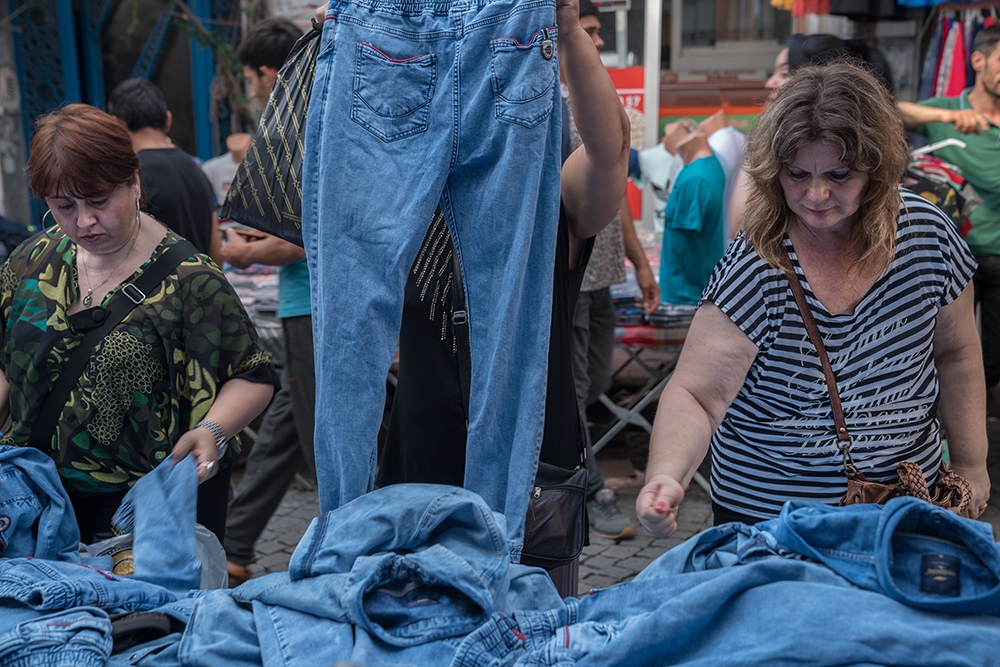 Women examine jeans at the Thursday market in Kumkapı. 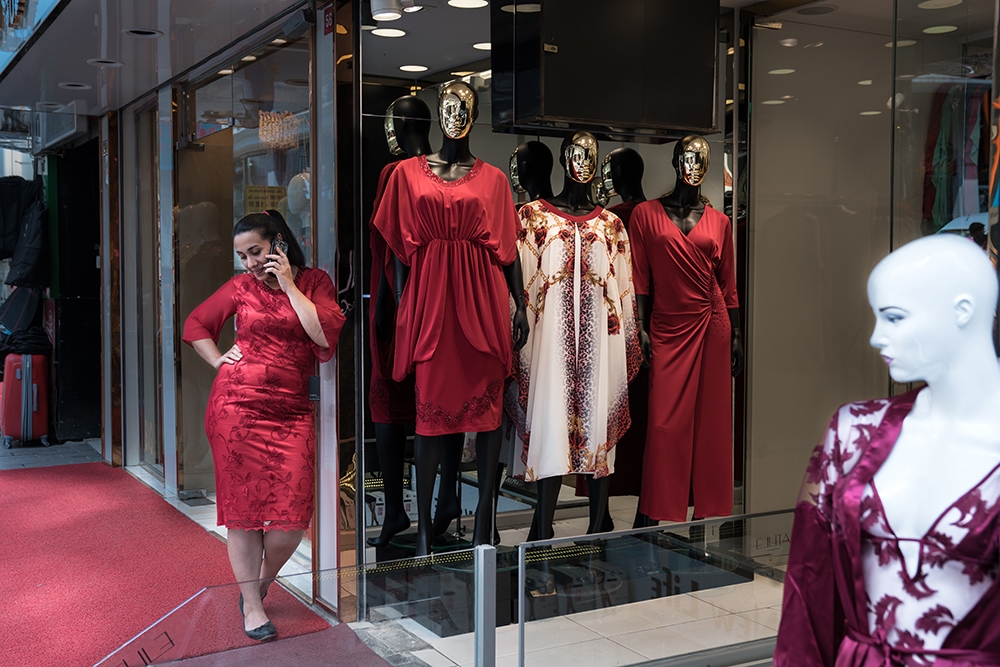 A shopkeeper in Laleli takes a break. 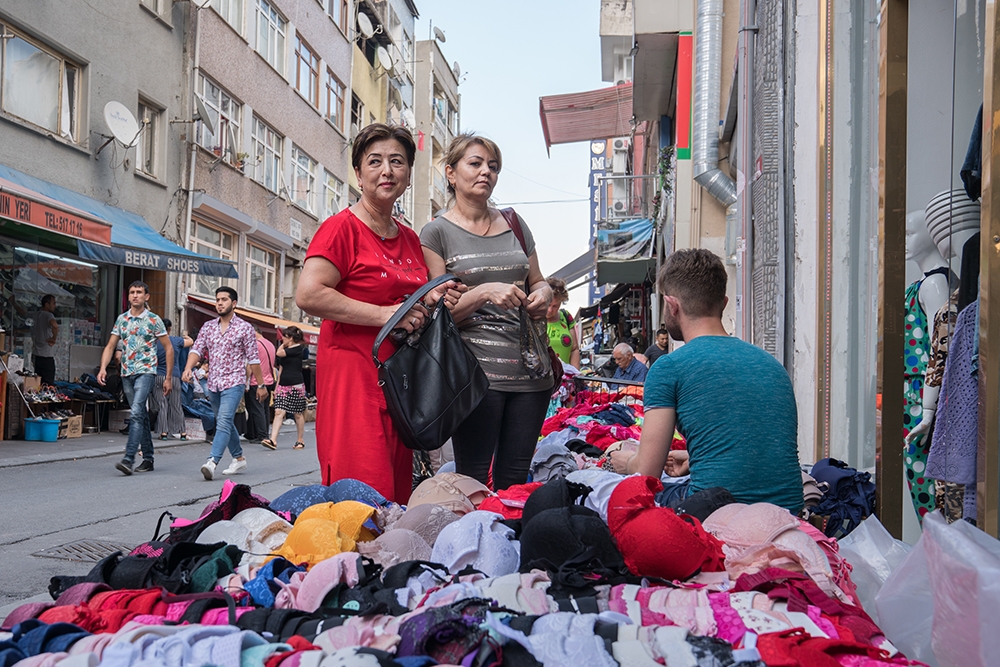 The Kumkapı weekly market near Laleli. 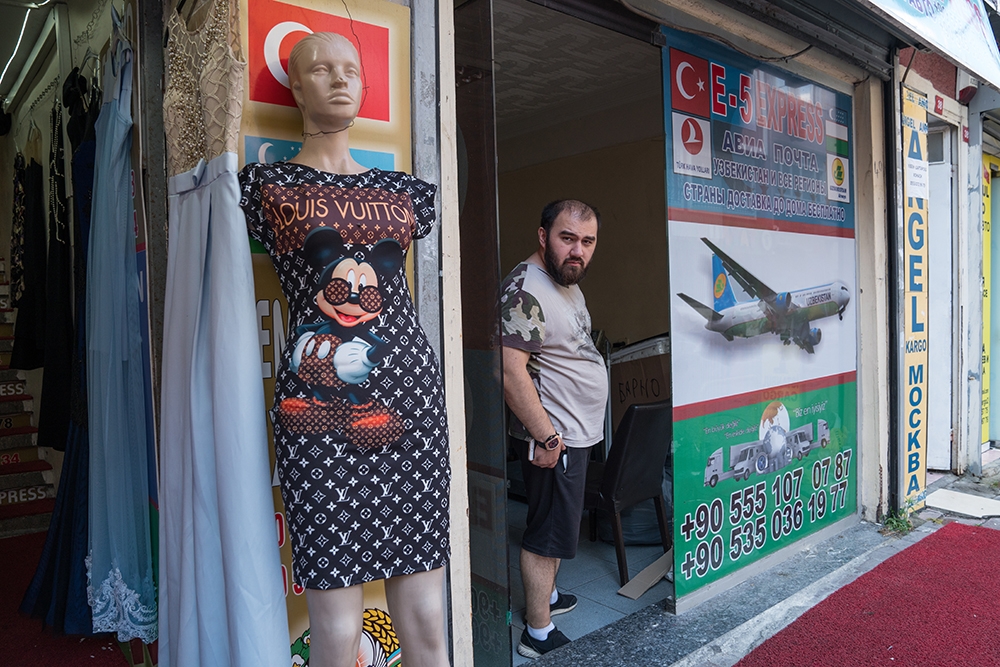 A man stands by his cargo shop, which specializes in transport to Uzbekistan. 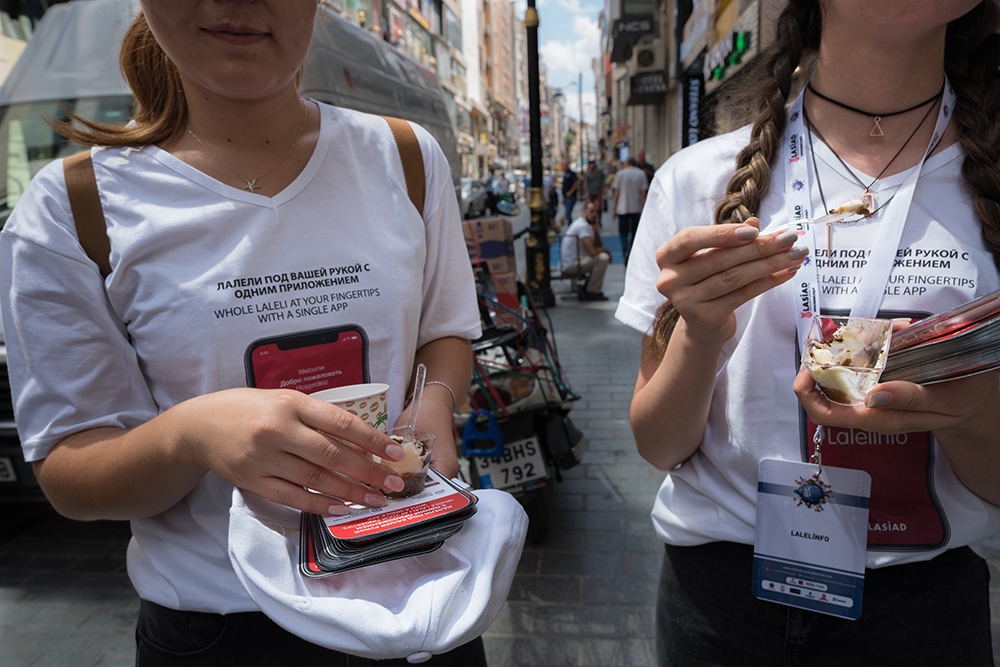 Two women on duty during the shopping fest advertise an app in Russian and English. 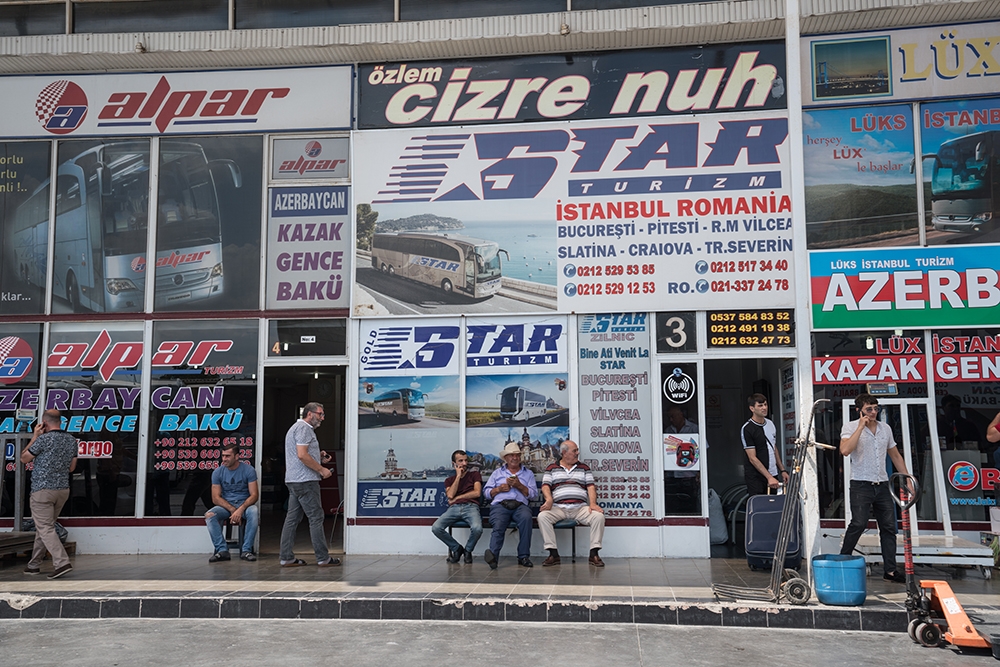 There are many bus companies selling tickets at the terminal in Aksaray.
prev
next

The neighborhood's raucous shops display wares popular in the former Soviet Union: sparkly evening gowns, hijabs, fake Gucci blouses. Many of the buyers are women from Russia and Central Asia.

Laleli is home to the so-called “suitcase trade,” where buyers from across the former Soviet Union procure goods to sell in bazaars and boutiques back home. The trade is one of the strongest links between Istanbul and the former Soviet world, with cultural ties growing alongside the economic relationship.

The suitcase trade gets its name from the early days after the collapse of the Soviet Union, when women from former Eastern Bloc countries would come to Istanbul by bus, fill their luggage to the brim with clothes and take them back home to sell. Today, though, the trade is a multi-billion-dollar business that has outgrown its humble moniker and attracts customers from all over the world.

The largest market for the Laleli trade is Russia, followed by Ukraine, Kazakhstan and Uzbekistan, said Şerafettin Yüzüak, secretary general of the Laleli Industrialists and Businessmen's Association (LASİAD).

Buyers who own retail shops in their home countries come to Laleli to purchase wholesale packages of clothing tailored to tastes back home. The shops – with names like “Ideal Carolina” and “Mood Life” – are decked out with lavish storefronts and flashy signage.

But it not only serves the ex-USSR, Yüzüak told Eurasianet. “There are people from around 150 countries coming to Laleli. There's major business from Africa when you count the countries one by one. There are people coming from Malaysia, Uruguay, Bangladesh, Pakistan, Tunisia and Morocco, from all Middle Eastern countries and all Balkan countries.”

While the trade has grown and become more formal over the years, Yüzüak said there are still small-scale buyers who come with their suitcases in tow.

Several of the surrounding neighborhoods also have a strong former Soviet presence. Neighboring Aksaray is full of grimy auto-repair shops and shady nightclubs, a seedy area known as a red-light district where many sex workers have been trafficked from Eastern Europe. It is also a rich dining destination offering Georgian, Azerbaijani, Uighur, Russian and other cuisines. There is a bus station frequented by passengers making the long journey to Tbilisi or Yerevan.

Down the hill from Laleli is Kumkapı, a shabby quarter on the coast of the Sea of Marmara lined with crumbling historic buildings and dotted with old Greek and Armenian churches. Today, it is perhaps the most multinational enclave in Istanbul and it is possible to hear a dozen or more languages on its main street before coming across someone speaking Turkish.

Like the customers in Laleli, Kumkapı's residents come from all over the world, but there is a particularly strong presence of people from former Soviet countries including Armenia, Uzbekistan and Turkmenistan. There are dozens of restaurants serving Uzbek cuisine. Kumkapı is also home to many of the cargo companies that ship Laleli's clothes abroad. In both areas, signs are frequently posted in Cyrillic and it's common to see job listings in Turkish seeking a Russian-speaking woman alongside hand-scrawled fliers in Uzbek advertising a room in a shared flat.

The currency of the trade is dollars, and that is no longer just limited to the clothing prices. “Even shoeshiners in Laleli charge in dollars,” Yüzüak said. “The suppliers, contract manufacturers and [tailors] who heard that [merchants in] Laleli earned in dollars began charging in dollars. Shopkeepers pay their rent in dollars.”

So while the value of the Turkish lira has significantly declined against the dollar over the last several years, this hasn't benefited Laleli merchants. “Laleli's income is in dollars but so is its expenditures,” Yüzüak said.

Many of the Turkish shopkeepers speak Russian. But while citizens of former Soviet republics remain the area's best customers, the trade has suffered due to a downturn in the Russian economy following Western sanctions for its annexation of Crimea.

“As a result of European Union sanctions imposed on Russia and the impact that had on the Russian economy, business isn't like it was,” Yüzüak said. “For example, if a Russian customer used to come and spend $10-20,000 within one or two days, that same customer is coming and spending $3-4,000.”

Local media reported that sales in Laleli hit the $8.6 billion mark in 2014 – the year Crimea was annexed and sanctions imposed – but that plummeted to $5.5 billion the following year.

Though Laleli's shopkeepers grumble about the Russian speakers not buying as much, the trade is still going strong, as any visit to the district makes plain. On one recent summer evening, the sidewalks buzzed as customers made their final purchases of the day and vendors sold sliced watermelon on street corners. “There are no empty shops,” Sarıçoban said. “Things might not be like they used to, but people are still trying to do business.”