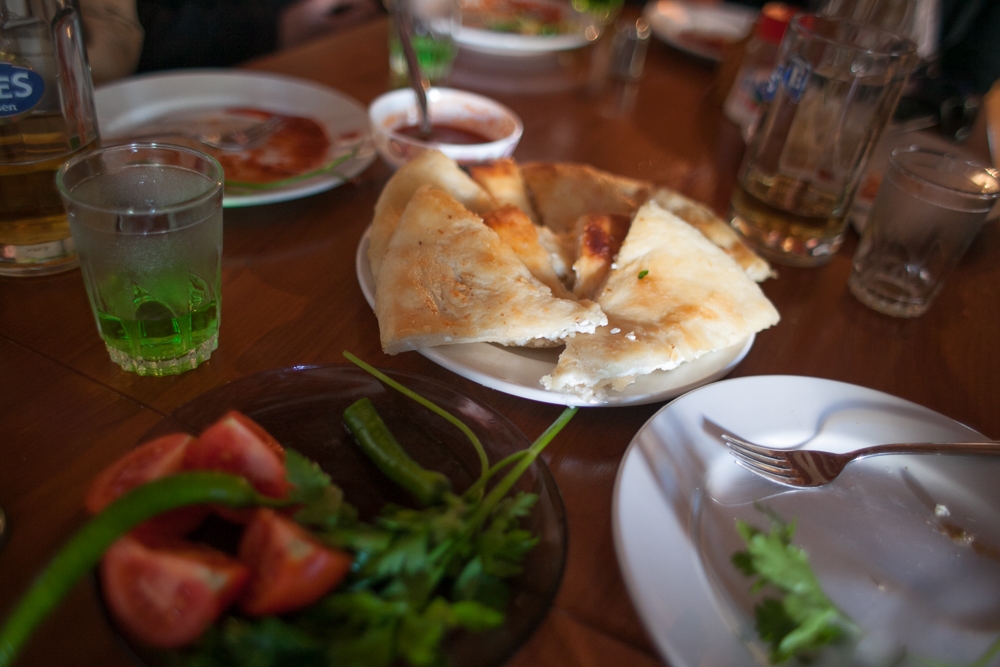 Anyone who’s visited Istanbul knows the city is full of delicious food. But sometimes finding fare that’s not Turkish can be a challenge. Those longing for the delectable tastes of perfectly spiced khinkali, melt-in-your-mouth khachapuri, and the fresh-grape goodness of a genuine chacha shot, won’t regret going a little off the beaten path to a neighborhood bustling with visitors, traders, and émigrés from the former Soviet Union.

Café Euro, opened six years ago, serves up Georgian cuisine, one of the tastiest culinary traditions known in the Russian-speaking world. There is no menu per se. Proprietor Eka Pruidze will tell you what’s available, and whatever you order, she’ll say it won’t possibly be enough to sate you.

One specialty you’re likely to find is khachapuri, a flat bread baked with fresh, slightly salty Georgian cheese and brought to your table piping hot. Khachapuri comes in different varieties. The default at Café Euro is imeruli, hailing from Eka’s native region of Imeretia. It is round and sliced into wedges that can easily be folded around fresh parsley or scallions. But you can also order the canoe-shaped adjaruli variety, which comes with an egg (or several, Eka will offer) cooked sunny-side-up atop the cheese filling. Few eating experiences are as gratifying as breaking off a dangerously hot piece of the crisp, doughy crust and dipping it into the khachapuri’s steaming, golden middle.

Another favorite, which goes particularly well with beer, is the khinkali, giant soup dumplings that Eka, her husband and their two staff make by hand. For those new to khinkali, the proper eating procedure to ensure you relish every drop of their meaty goodness is as follows: Restrain yourself long enough to allow them to cool slightly; otherwise you risk burning the tips of your fingers. Then, grab a plump, white khinkali by its “nipple”—the convenient protrusion used to hold the dumpling. Take a small bite on one side and immediately slurp in the deliciously seasoned broth. After this, you can take your time nibbling away at the tender pasta pouch and the peppery, minced meat inside.

If any of this is unclear, you may be able to turn for help to the other patrons, for example a group of gregarious drivers from Georgia. They might even share some of their young, homemade red wine, stowed away in a plastic jug under their table. Eka herself serves Georgian wine, when her supplies haven’t been swept away by a massive party the night before. She also has fresh Efes beer on tap and fine Georgian chacha, a grappa-like drink, served here in the tulip-shaped tea glasses ubiquitous in Turkey.

The café sits on the fringes of a busy cargo hub full of buses and trucks shuttling goods between Istanbul and former Soviet republics in the Caucasus, as well as the Balkans. Signs advertise rides to cities like Eka’s native Kutaisi in Georgia, and Ganja and Baku in Azerbaijan, as well as freight deliveries to Ermenistan (Armenia) and Dagestan.

Eka, who is 36 and spent three years as a shuttle trader before opening the cafe, imports nearly everything, including her meat and cheese, from Georgia. Nowadays, her supplies arrive on Sunday mornings, on a weekly bus from Kutaisi. So head to Café Euro on a Sunday or shortly thereafter. That’s when you’re more likely to find Tarkhun, the bright green soda made from tarragon and cherished throughout the former Soviet Union, or tkemali, the tangy plum sauce that goes so well with any Georgian meat dish, or Nabeghlavi, a slightly sulfurous-tasting mineral water. But be warned, Café Euro is a tavern in every sense of the word: The crowd can get a little rough and rowdy some evenings. (As Eka tactfully put it, “not all my customers are like you.”)

If you have the chance, be sure to try Café Euro soon. Within a couple of years the city plans to complete a new subway station in the area, which is likely to sweep away the privately run parking lot the café is attached to. We hope it doesn’t spell the end of Eka’s khinkali in Istanbul.

Directions: Come out of Yusufpaşa tram station in the Aksaray neighborhood and walk, in a direction perpendicular to the tracks, over the hill, towards the Sea of Marmara (if you see lots of discos and small hotels, you’re in the right area). When you hit Küçük Langa Caddesi, a relatively large street running parallel to the water, make a right and walk west for about five minutes until you hit the €uropa Bazaar on your left. Café Euro is at the gate, down a few steps.

**UPDATE (April 24) -- It is with a heavy heart we have learned that, as of one week ago, Café Euro has closed. We hope that Eka Pruidze manages to reopen her kitchen again soon. Meanwhile, Eka, you will be missed.