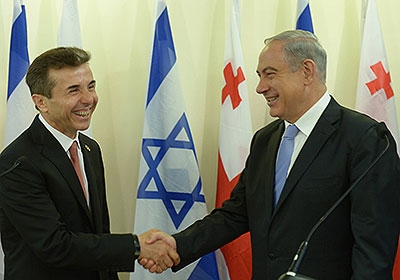 When Georgia's prime minister, Bidzina Ivanishvili, led a delegation to Israel this week, the agenda reportedly included restarting the two countries' defense ties. In advance of Ivanishvili's visit, Georgian Defense Secretary Irakli Alasania told Israeli newspaper Ma'ariv (via BBC Monitoring) that "We are no longer at war with Russia, and we can advance our security relations with Israel.” Ma'ariv also said that Georgia was seeking to buy Israeli weapons including UAVs, anti-tank and anti-aircraft missiles. Georgian Foreign Minister Maia Panjikidze, however, explicitly denied those reports, saying “Cooperation in the defense sphere might be touched upon, but it will in no way be related to arms procurement [from Israel] or something like that.”

During their public appearance together, Ivanishvili and his Israeli counterpart Benjamin Netanyahu did not mention defense cooperation. (Netanyahu did mention that the “great challenges that come from Iran” would be on the agenda; the Wall Street Journal last week published an extensive investigation into how Iranian businesses use Georgia to evade international sanctions.)

The military ties between the two countries once included Israeli training of Georgian soldiers and a small, but significant, number of arms sales. Israel sold Aerostar and Hermes-450 unmanned aerial vehicles to Georgia, as well as mobile rocket launchers.

The former Georgian government led by President Mikheil Saakashvili's United National Movement party was fond of drawing analogies between itself and Israel, as embattled islands of democracy in unfriendly regions. During the 2008 war between Georgia and Russia over South Ossetia, then-minister for reintegration Temur Yakobashvili (and later ambassador to Washington) told Israel's Army radio: “The Israelis ought to be proud of the fact that Georgian soldiers received Israeli education and training and are fighting like I don't know what.”

But that war ultimately led to a break in Georgia-Israel ties. After that conflict, Russia reportedly pressured Israel into stopping arms sales to Georgia, threatening to step up arms sales to Israel's regional foes, Iran and Syria. And embarrassing reports emerged, via Wikileaks, that Israel had given Russia the datalink codes to some of the drones it sold to Georgia, allowing Russia to remotely control them and force them into the ground. Saakashvili alluded to the incident when, last year, Georgia rolled out what it said was an indigenously produced drone.

“When you make procurement from abroad a seller may not give you a full technology or may share technology [bought] by you to your adversary,” he said. “No one will share this [pointing to the Georgian-made drone] with others; it’s ours… We no longer depend on others.” The arrest in Georgia of two Israeli businessmen on charges of bribery also soured the relationship.

Is all that now in the past? Sales of Israeli weapons to Georgia are likely not on the table, Michael Cecire, a Georgia analyst at the Foreign Policy Research Institute, told The Bug Pit: “I doubt that Georgia will be importing specific Israeli systems. At least not yet. The whole datalinks scandal should make even this government wary of buying Israeli hardware,” he said in an interview. “However, Alasania has been on a huge push to co-develop defense materiel with Turkey and Azerbaijan.” In particular, Cecire noted, Israel could get involved in a proposal for Georgia and Azerbaijan to jointly produce the Su-25 ground attack aircraft. Israel could offer “Israeli technical know-how to increase the technological sophistication of Georgian and probably joint Georgia-Azerbaijan defense systems,” Cecire said.

It's not clear how Russia may have factored into this most recent warming of ties. Ivanishvili has made one of his foreign policy priorities the repair of relations with Russia, so it's possible that Russia no longer sees Georgia as much of a threat as it previously did. It's also possible that other Russian moves in the Middle East, for example Russia's continued support for Syria's government, have made Israel decide it wants to tweak Moscow. It's also possible that the level of cooperation under discussion is small enough that it doesn't bother the Kremlin. As always, though, Russia remains the wild card in Georgia-Israel relations.