To some, the victory was marred by the introduction of Russian peacekeepers, but the mood was otherwise celebratory. 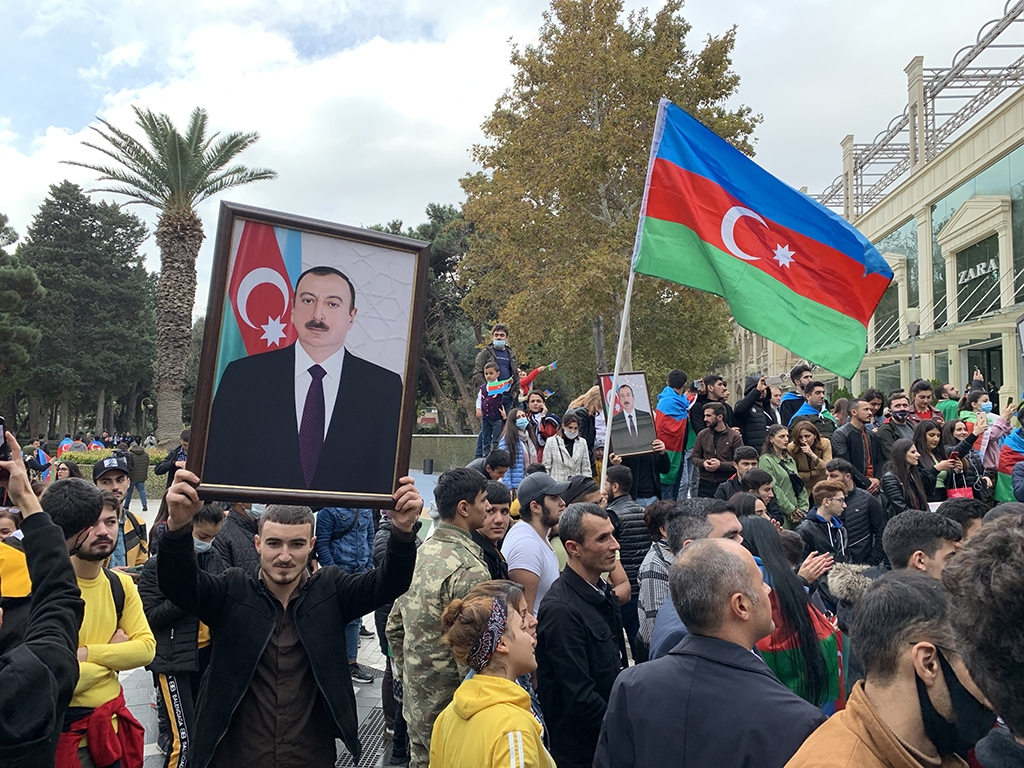 A man carries a photo of President Ilham Aliyev in Baku on November 10. (photos by Ulkar Natiqqizi)

Azerbaijanis are celebrating a peace deal giving them control of large swaths of formerly Armenia-controlled territory in and around Nagorno-Karabakh, a day they had been awaiting for more than a quarter century.

News broke overnight on November 10 that President Ilham Aliyev, Armenian Prime Minister Nikol Pashinyan, and Russian President Vladimir Putin had signed an agreement to end the month-and-a-half long war. The terms were almost entirely favorable to Azerbaijan, most significantly the return of nearly all the territories surrounding Nagorno-Karabakh as well as their historic and cultural center in the territory, Shusha.

As the new day dawned in Baku, 70-year-old Samaya Dadashova went out into the streets. She hadn’t been able to get a wink of sleep after news had broken of the peace deal, and she was anxious to join the celebrations in the morning. Dadashova wiped tears off her face as she made her way through festive crowds. “I was so happy, watching all the flags, and I cried,” said Dadashova, whose grandnephew lost a leg in the fighting.

“My happiness has no bounds. This is a double joy for me because I’m from Karabakh,” said Malik Taghizada, a veteran of the war in the 1990s that left the territory under Armenian control. The new deal stipulated that his home region of Aghdam would be returned to Azerbaijan by December 1. 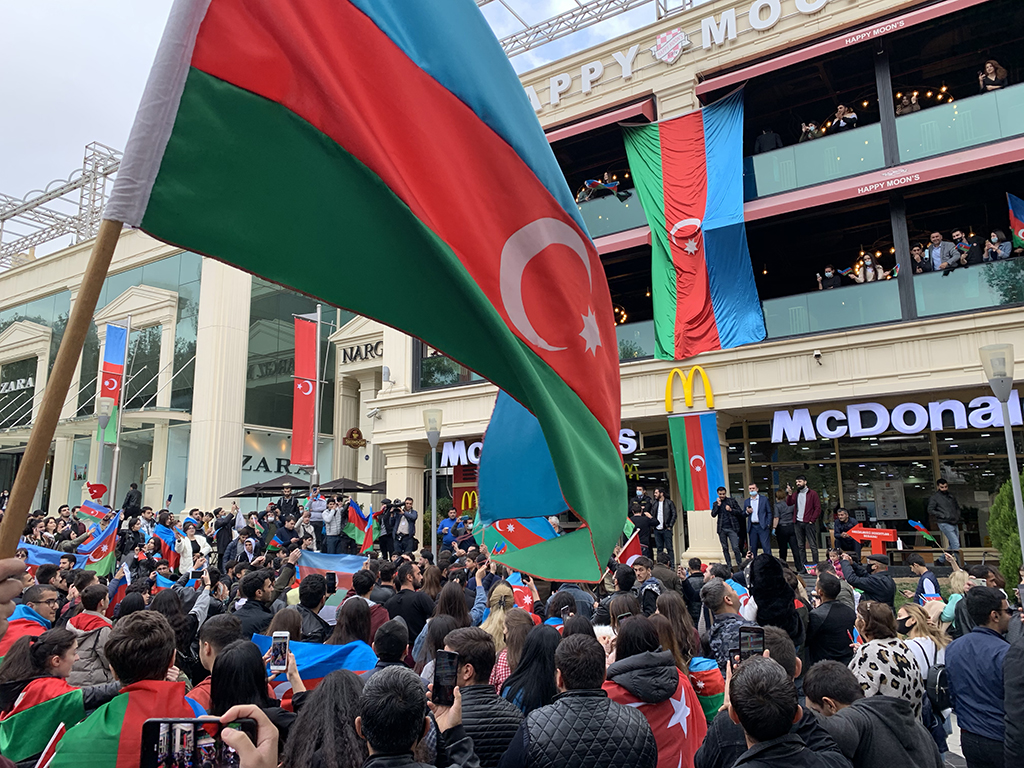 One unexpected element of the deal is that it will be enforced by about 2,000 Russian peacekeepers, who began entering Karabakh just hours after the deal was signed. They will be based in Stepanakert, the regional capital, which will remain under Armenian control.

While Azerbaijanis are jubilant about territorial gains they made during the fighting, some have expressed concerns about the deployment of Russian troops and the leverage over Baku it promises to give to Moscow.

“After 27 years Russian troops are returning to Azerbaijan and this is a very bad thing,” said opposition leader Ali Karimli of the Azerbaijan Popular Front Party in a videotaped statement. “It may be called a peacekeeping army, but we know what this army is all about from its activities in Moldova and Georgia,” he said, referring to frozen conflicts elsewhere in the former Soviet Union that feature the presence of Russian troops.

Karimli said that Russian troops helped Armenians win the first war over Karabakh in the 1980s-1990s. “The return of Russian troops to Karabakh, even with a peacekeeping mission, runs counter to the national interests of Azerbaijan,” he said.

Other Azeris echoed the sentiment, saying that by taking control of Karabakh's peace Russia also gets a say in Azerbaijan’s affairs. “Getting the Russian armed forces to leave Azerbaijan has been single most important decision of our independence,” tweeted Ruslan Azadov, an Azerbaijani living in the United States.

Shahin Rzayev, a journalist and commentator in Baku, said that Moscow scored a strategic victory by getting involved at this stage, before Azerbaijan could fully retake Nagorno-Karabakh, thus retaining levers of influence on both sides. “Russia does not need Azerbaijan to get too strong,” Rzayev told Eurasianet, saying that Baku appeared to have consented to an ultimatum from Moscow.

“There was probably no other way,” said Khadija Ismayil, a prominent journalist in Azerbaijan, who also opposed the introduction of Russian troops into the conflict zone. “The main problem is that the conflict got refrozen,” she said, since neither side is going to be happy with the new territorial division. “The threat of the conflict getting unfrozen again” will continue to hang over the region.

Rzayev said that Moscow killed two birds with one stone, manipulating its way to securing a military presence in Azerbaijan and likely dooming Armenian Prime Minister Nikol Pashinyan. While Russian media has generally been rooting for Armenia in the conflict, it has done so while heaping criticism on Pashinyan himself. (Pashinyan came to power in 2018 through the type of street protests the Kremlin fears.)

Still, Rzayev said that it was a pragmatic decision on Baku’s part to go along with Moscow’s plan. “It’s a sober compromise,” he said, adding that an international peacekeeping presence would have nevertheless have been a better solution for both sides.

But for ordinary Azerbaijanis, the drawbacks of the Russian deal took a back seat to the victory. “I’m a father of a soldier. I congratulate our nation,” 53-year-old Nizami Baghirov told Eurasianet. “My son is there [in the conflict zone] right now. […] I’m waiting for him to come back.”