The order to leave within 20 days was a sharp U-turn from earlier messages saying that there was still a year and a half to find a solution. 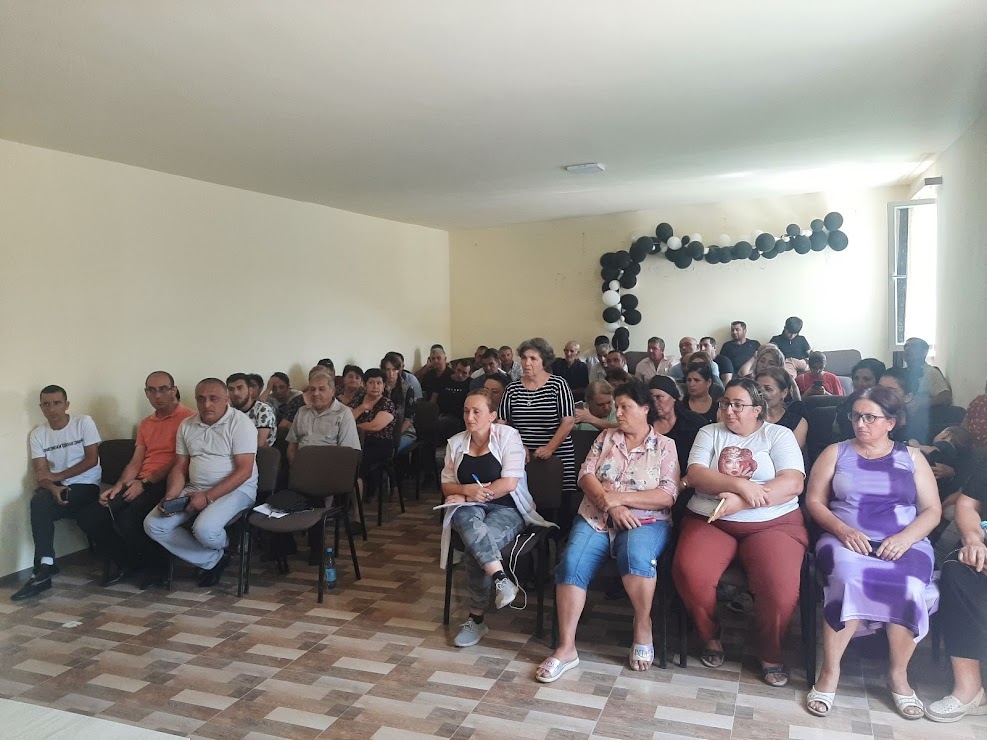 Residents of the village of Aghavno at a meeting in which they were told they would have to evacuate within 20 days, ahead of the area's handover to Azerbaijan. (photo: Facebook, Nagorno-Karabakh Ministry of Territorial Administration and Infrastructure)

Following weeks of uncertainty about their fate, residents of three communities in Karabakh’s Lachin region have been told they need to leave their homes within 20 days as Azerbaijan prepares to retake control of the area.

Nagorno-Karabakh’s de facto Minister of Territorial Administration and Infrastructure, Hayk Khanumyan, visited one of the affected villages, Aghavno, on August 5 and told residents that they should leave by August 25.

The handover comes as Azerbaijan is pressing Armenians to abandon the current road connecting Armenia with Nagorno-Karabakh and to instead use a new road. The three communities all lie along the old road.

Khanumyan “said that the Azerbaijanis will come and the Russians will leave [the current road] on August 25,” Mariam Hakobyan, an Aghavno resident, told RFE/RL’s Armenian Service. The order also affects two other communities, the village Sus and the town of Lachin.

The announcement was an abrupt change of tune from the Armenian authorities. At the end of June, the secretary of Armenia’s Security Council, Armen Grigoryan, told reporters after a cabinet meeting: "We still have time to find solutions both for the road and the residents. We still have approximately a year and a half.” That echoed earlier remarks from Karabakh’s human rights ombudsman.

The villages in question lie along the Lachin corridor, the road that links Nagorno-Karabakh to Armenia. According to the ceasefire agreement that ended the 2020 war between Armenia and Azerbaijan, the entire district of Lachin was supposed to be handed over to Azerbaijan on December 1, 2020, except for a five-kilometer buffer along the corridor road patrolled by Russian peacekeepers so that Armenians could continue to travel safely between Nagorno-Karabakh and Armenia.

At the end of July, Armenian officials said they would begin that work in August. On August 2, Harutyunyan said that "the Azerbaijani side, via the peacekeepers, demanded to organize a shift to the new route as soon as possible."

Harutyunyan’s remarks came as fighting broke out in the region just to the north of the current Lachin corridor. The escalation appeared at least in part to be an attempt by Azerbaijan to pressure Armenia to speed up the construction of the new road and the handover of the villages along the old one.

While the ceasefire statement does not say anything about the fate of civilians along the current Lachin corridor, Armenians do not feel secure remaining under Azerbaijani control and without protection from the Russian peacekeepers. In an August 5 statement, Azerbaijan President Ilham Aliyev said that the new road “was nearing completion and that Russian peacekeeping forces would be deployed on that road after its construction was completed.” He did not mention the fate of the people living along the old road.

Before the first war between the two sides in the 1990s, the area was populated by ethnic Azerbaijanis. After Armenians won control of the territory in that war, they settled the area with Armenians, some from Armenia itself and others from Armenian diaspora communities in Syria and Lebanon.

Now, those residents say they will follow the government’s orders. "What should they [residents] do? They have no other choice. Let them all die, for what?” asked the mayor of Aghavno,

Andranik Chavushyan, in an interview with news website aravot.am, said, “The state must protect its compatriots; if it doesn't, what should the residents do?"

About 200 people now live in the affected areas, and Aghavno residents said they were confused and disappointed. "We will probably take the children out [of Aghavno], but the adults will stay until the last day, the last hour. Let's see how they execute the handover," one resident, Anush Arakelyan, told RFE/RL.

The Karabakh government is offering a voucher for 10 million Armenian drams ($25,000) to each household in the three communities to find a new home somewhere else.

Officials in Yerevan and Stepanakert have not publicly commented on the planned evacuation. It’s also not clear how traffic between Armenia and Nagorno-Karabakh will run if the existing Lachin corridor is handed over to Azerbaijan by the end of this month.

On top of the evacuation of residents, the Karabakh authorities are trying to remove more than four dozen monuments from the area, mostly from the last 30 years and dedicated to the wars with Azerbaijan.

"I consider it a mistake because we are erasing the tracks (of Armenian’s presence) with our own hands," Lusine Gharakhanyan, an adviser to the Nagorno Karabakh de facto leader, told RFE/RL on August 8. But authorities in Karabakh also fear the destruction of the monuments if those remain under Azerbaijani control, she said.

With additional research by Heydar Isayev.