Two pro-Pashinyan candidates were the first-round leaders for de facto president. Observers noted widespread violations, however, and many argued the vote shouldn’t even have happened given the coronavirus outbreak. 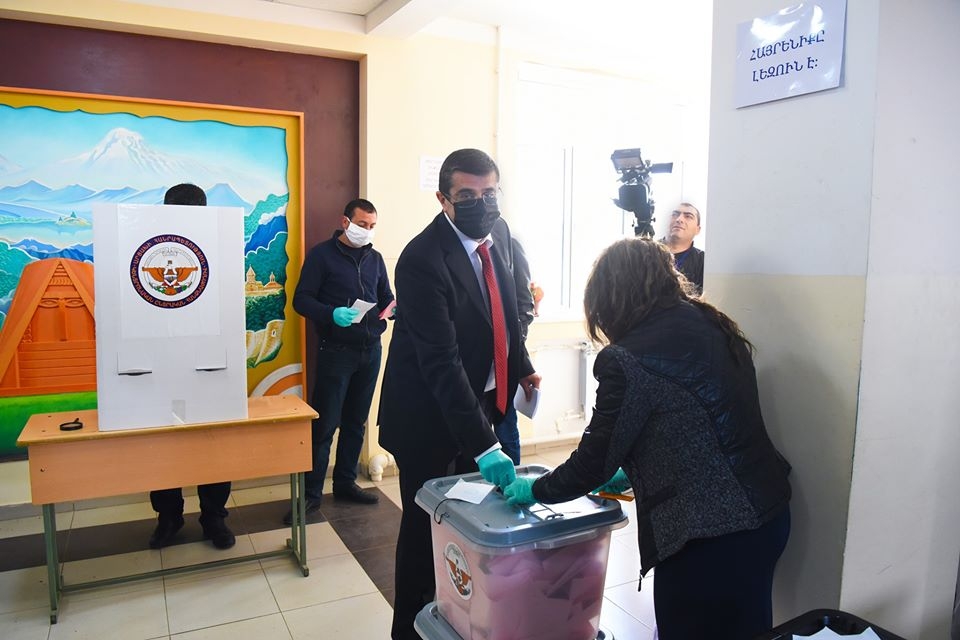 After a controversial election that went ahead in spite of worries about its potential to spread the novel coronavirus, Nagorno-Karabakh is set to do it again in two weeks.

No candidate for the de facto president of the territory got more than 50 percent in the March 31 vote. That will necessitate a second round on April 14, officials from the Central Election Commission said.

A second round was nearly avoided: the leading vote-getter, local oligarch and former prime minister Arayik Harutyunyan, got 49.6 percent of the vote. He will face Masis Mayilyan, the current de facto foreign minister of the territory, who got 26.7 percent in the first round.

The next leader of the unrecognized republic, then, will be an ally of Armenian Prime Minister Nikol Pashinyan. Both men sought to align themselves with Pashinyan in their campaigns, though Pashinyan did not endorse anyone in the race.

The election will thus bring some measure of Armenia’s “Velvet Revolution” to its de facto protectorate Karabakh, which is internationally recognized as part of Azerbaijan but which Armenian forces won in a war in the 1990s.

While Armenia and Karabakh are tightly linked, that relationship was strained by the fact that until now, Karabakh has been ruled by allies of the former Armenian government, which Pashinyan toppled in 2018. Leaders of the former regime in Armenia, including former presidents Serzh Sargsyan and Robert Kocharyan, made some vague efforts to regain power by using Karabakh as their last bastion. But their favored candidate, Vitaliy Balasanyan, finished out of the running, with 14.7 percent of the vote in third place.

However, election observers from Armenia registered widespread violations. “There were fundamental violations of the secrecy of the ballots,” said the head of one observer mission, Aleksey Petrosyan, reported the news website Caucasian Knot. “There were many reports of photographing filled-out ballots. We are now trying to uncover the network to understand how the scheme worked. It’s clear that the ballots were being photographed for accounting. We want to know who is coordinating it and to whom they are reporting.”

Several smaller parties also claimed that there were substantial numbers of violations.  The head of one opposition party, Artur Osipyan, singled out Harutyunyan as the beneficiary of the ballot-photographing effort, Caucasian Knot reported.

And BBC Russian reported ahead of the vote that there was a widespread vote-buying effort in Karabakh, though it wasn’t clear on whose behalf.

Assuming that Harutyunyan wins in the second round, he could prove an awkward partner for Pashinyan, given his image as an oligarch – he has a large variety of business interests in Karabakh including banking, energy, and agriculture – and Pashinyan’s drive to stamp out corruption.

“Harutyunyan is not the candidate that Pashinyan would like to see, since they have clashing images and Pashinyan will lose political capital, as he will be seen as responsible for Harutyunyan's victory,” wrote Yerevan-based analyst Hrant Mikaelyan in an election-eve piece. “Still, Harutyunyan will do everything he can do smooth out relations and, most likely, his victory is not going to be strongly opposed by Pashinyan.”

The results of the vote, as significant as they will be for the territory’s governance, were nearly overshadowed by the looming coronavirus outbreak.

Karabakh itself has registered no official cases of COVID-19, but Armenia – its only connection to the outside world – has a rapidly growing outbreak, with 571 confirmed cases and three confirmed deaths as of April 1. There is regular traffic between Armenia and Karabakh, making the spread of coronavirus to Karabakh inevitable, but many argued that the election – which was to bring hundreds of Armenian observers to Karabakh – was an unnecessary encouragement for more Armenians to enter the territory. Some of the observers declined to go to Karabakh, citing the need to limit the coronavirus spread.

Webcams at voting places throughout the day showed many voters wearing masks, but also rampant violations of the social-distancing norms proscribed to limit the spread of the virus.

Many voters interviewed by Caucasian Knot said they believed the vote should have been postponed because of the outbreak, but turnout nevertheless was a robust 72.6 percent.