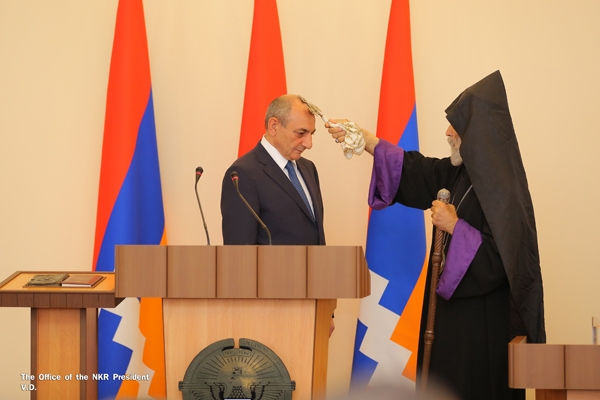 Bako Sahakyan at his inauguration ceremony for his third term as president of the de facto Nagorno Karabakh Republic. (photo: nkr.am)

It’s the same leader, but a changing political system. On September 7, Bako Sahakyan was inaugurated for a third term in office as president of the unrecognized Nagorno Karabakh Republic.

But the political structure he's presiding over is undergoing potentially far-reaching shifts. Sahakyan will serve a three-year transitional term until 2020, when the unrecognized republic transitions from a semi-presidential to a presidential political system. (No state recognizes Karabakh's statehood; most of the world recognizes it as legally part of Azerbaijan, but Armenian forces have controlled the territory since winning a war in the early 1990s.)

Karabakh's de facto parliament reelected Sahakyan on July 19, 2017. Backed by the Free Motherland, Dashnaktsutyun, and Democracy parties, he received 28 of 32 parliamentarians’ votes to handily beat his only competitor, Eduard Agabekyan of the Movement-88 party.

Before 2017, Sahakyan’s third term would have been impossible. The Karabakh constitution restricted the leader to two five-year terms. In February, though, the republic held a national referendum on amending the constitution, which passed with about 90 percent support.

As a result, by 2020, Karabakh will eliminate the post of prime minister, and political power will be concentrated in the hands of the president. The new constitution also calls for presidential and parliamentary elections to be held concurrently every five years. Since the next elections are scheduled for 2020, the parliament would select the interim president. Their clear choice was Sahakyan.

Supporters of the new constitution have argued that a presidential system will better allow the unrecognized republic to manage its long-standing military conflict with Azerbaijan, from which Karabakh de facto separated in a 1988-1994 war. They point to a four-day eruption of fighting along the border in April 2016 as proof of the urgency of these reforms.

But not everyone agrees with that explanation. Others viewed the referendum as a move by Sahakyan to extend his presidency. A low-profile but popular leader, Sahakyan has seldom publicly contradicted Serzh Sargsyan — president of Karabakh’s patron, Armenia — on any critical issues. As a result, he has enjoyed Sargsyan’s support.

Writing for EurasiaNet.org on the eve of the constitutional referendum, Emil Sanamyan compared Karabakh’s intended concentration of presidential power to similar efforts in Azerbaijan to bypass presidential term limits enshrined in the constitution. He also suggested that the Karabakh referendum could set a precedent for Sargsyan when his own second term runs out in 2018.

“There are, of course, lots of ‘reasons’ and ‘explanations’ given by the Karabakh authorities…” he wrote. “But come on, anyone clinging on to power for that long looks wrong from the perspective of the international community, don’t you get it?”