Next spring’s vote for de facto leader will take place amid deep changes in the territory’s relationship with its patron, Armenia. 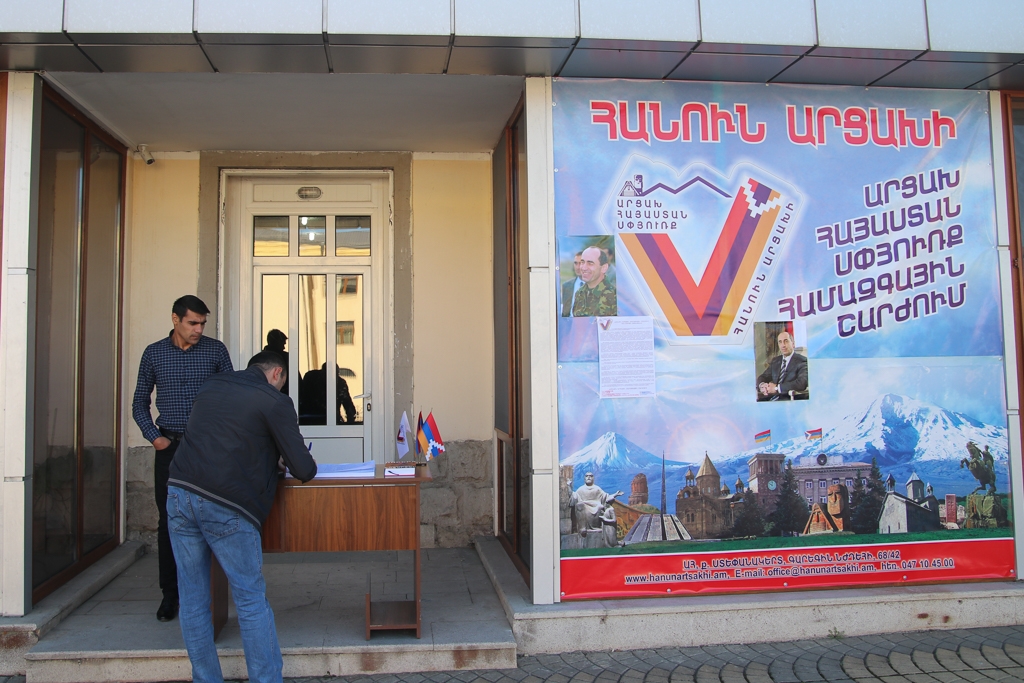 Allies of the former authoritarian government in Armenia appear to be trying to regroup in Karabakh and make it their last stand. (photos by Joshua Kucera)

Is Armenia’s revolution spreading into its protectorate, Nagorno-Karabakh?

On the surface, little has changed recently in Karabakh’s capital, Stepanakert, its sleepy streets thick with soldiers in uniform and dotted with diaspora-funded construction projects.

But Karabakh’s political class describes an ongoing seismic shift in how the territory is governed and its relationship with its patron, Armenia. The changes will be crystallized in next April’s elections for de facto president and for parliament; the vote is widely expected to be the freest in Karabakh’s history, with more space for the opposition and less interference from Yerevan.

“These will be the most competitive elections in the history of Nagorno-Karabakh,” said Hayk Khanumyan, who is running as a candidate from the opposition National Renaissance Party. “The government is weak, there are a lot of factions within it now, and this is an opportunity for us because they can’t concentrate their forces,” he told Eurasianet.

“This election is a great opportunity to become a normal country, but it’s also a big danger,” said Gegham Baghdasaryan, president of the Stepanakert Press Club. “It’s going to be chaotic.”

The “danger,” Baghdasaryan said, comes from the remnants of the former authoritarian government in Yerevan and its many allies who remain in Stepanakert’s government and security structures.

Having fallen out of power in Armenia they appear to be trying to regroup in Karabakh and make it their last stand. “This will be a fight for their life,” Baghdasaryan told Eurasianet.

For now, the hopes of the old guard rest on Vitaly Balasanyan, a former secretary of Karabakh’s national security council who left office in June after repeatedly criticizing the new authorities in Yerevan, in particular Prime Minister Nikol Pashinyan.

Balasanyan now heads a political organization called “For Karabakh.” In front of the group’s Stepanakert headquarters is a large poster supporting Robert Kocharyan, a former president of Karabakh, and then of Armenia, and now Pashinyan’s political archenemy. Next to the poster is a book where people can sign a petition demanding Kocharyan’s release; the ex-president is now in jail in Armenia on charges related to the violent breakup of protests during his presidency in 2008.

During Eurasianet’s short visit two people stopped in to sign the book; Balasanyan said that nearly 5,000 people had signed within a few days of the launch and that “For Karabakh” would soon start gathering signatures in smaller towns around Karabakh. 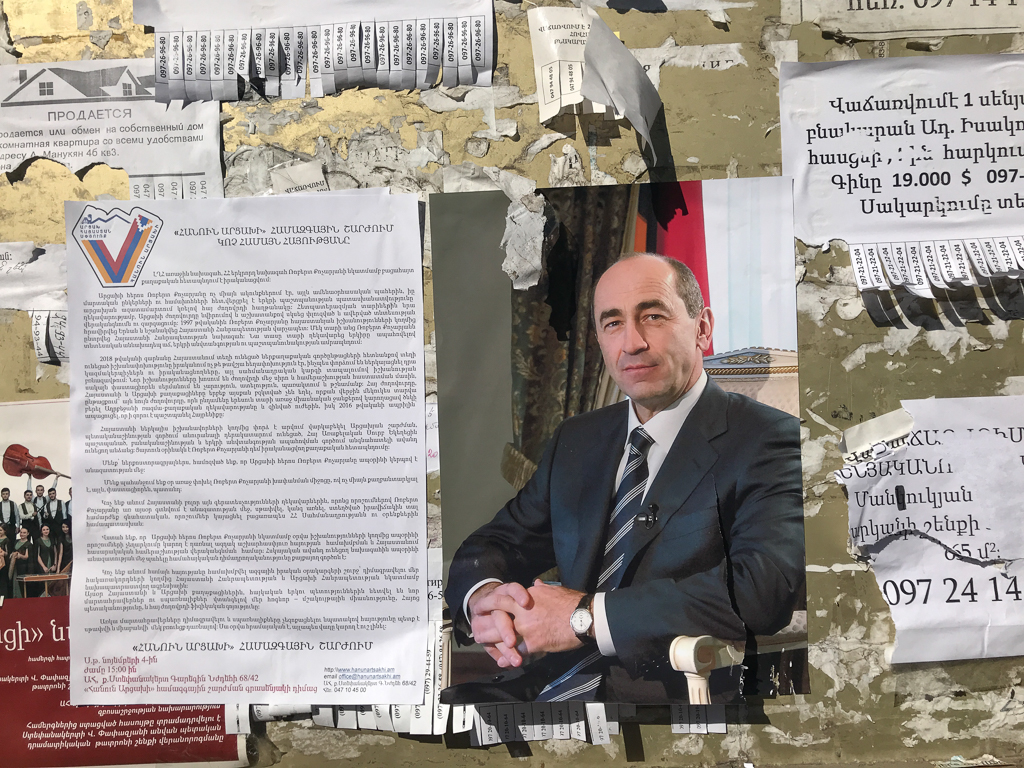 Pashinyan’s rise to power has led to unprecedented public sniping between Yerevan and Stepanakert. The feud came to a head in May, when the current de facto leader of Karabakh, Baho Sahakyan, and one of his predecessors provided bail for Kocharyan. Pashinyan reacted furiously, accusing the Karabakh leadership of trying to undermine him.

In an interview, Balasanyan described Kocharyan – who was later re-arrested – as a “political prisoner” and Pashinyan as a “Western project.” Of Pashinyan’s coming to power, he said: “It wasn’t a revolution but a seizure of power by force.”

Balasanyan is running for president, and his campaign is centered around his record as a prominent commander in the separatist war with Azerbaijan in the 1990s that led to Karabakh’s de facto independence. “Karabakh needs a president who took part in the war, he is going to be the commander in chief,” he said.

But he expects the authorities in Yerevan to try to thwart his run: “I don’t know if the Armenian government is going to intervene openly, but I’m sure they’re going to do it secretly.”

Armenia’s government still holds considerable sway in Karabakh: It provides more than half of the state budget and its military units serve in the territory.

In the past, Yerevan used a variety of levers to make sure that its favored candidates won elections in Karabakh. Now, though, the two entities are “less synchronized,” said Hrachya Arzumanyan, a political analyst and adviser to Karabakh’s de facto foreign minister.

“It used to be that Armenia would try to block changes here, but that isn’t happening anymore,” said Baghdasaryan of the Stepanakert Press Club.

This time, Armenia’s main intervention in the elections will be to provide monitors to try to ensure that the vote isn’t rigged. It sent a small mission to monitor the local election in September, which is being seen as a trial run for the bigger elections in April.

While the elections are expected to be the fairest ever in Karabakh, that distinction comes with a large caveat: The more than 600,000 ethnic Azerbaijanis who fled the territory during the war in the 1990s won’t be participating. (The population of Karabakh is now about 150,000, nearly all ethnic Armenians.) The current negotiating framework between Armenia and Azerbaijan to resolve the conflict envisages the right of those former residents to return to their homes, but there is little prospect of that happening any time soon. 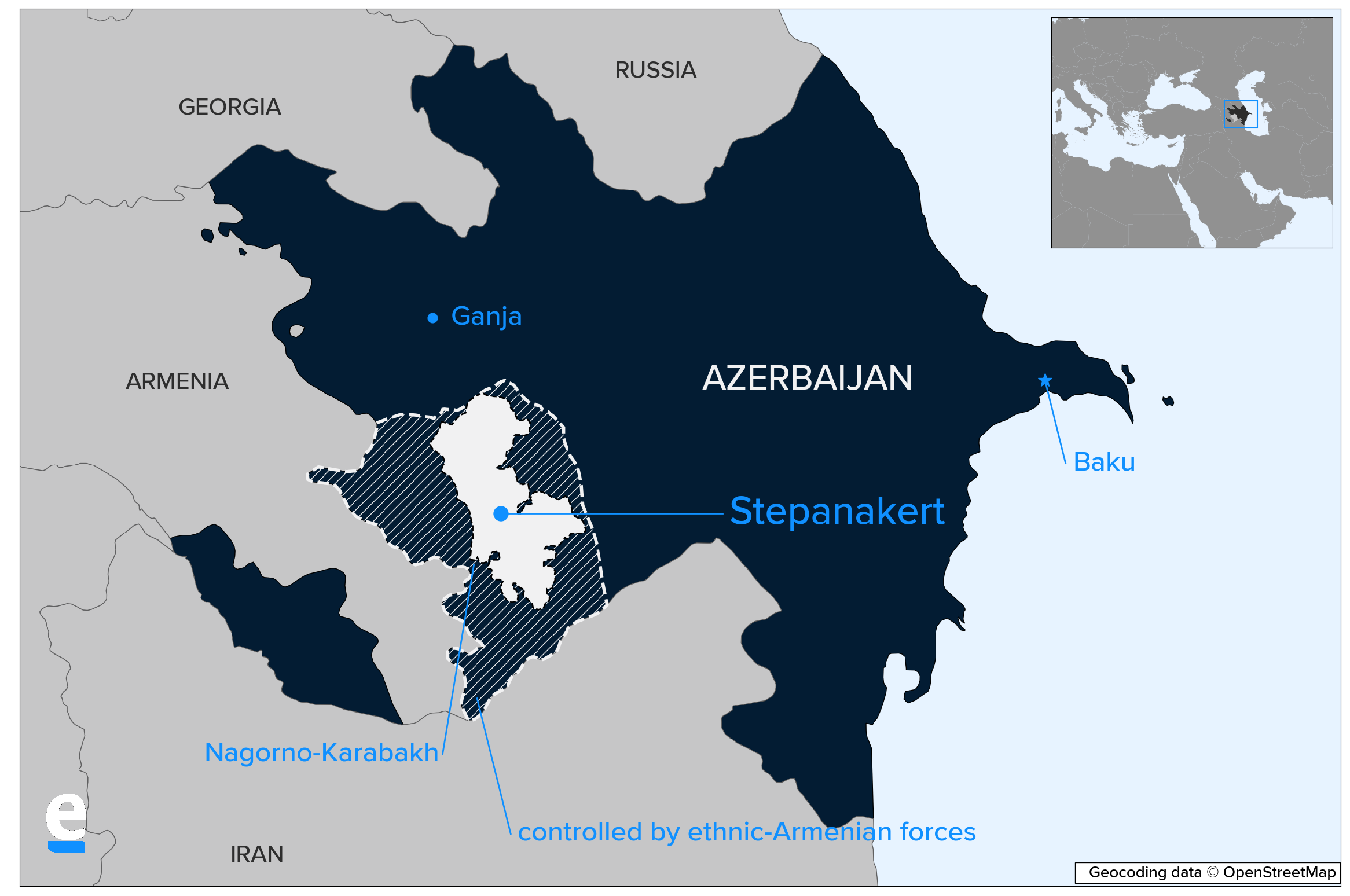 For all the intrigue around Balasanyan’s run, most observers in Stepanakert don’t expect him to win. (He may not even be the old guard’s candidate by the time the elections roll around: some predict that Arshavir Gharamyan, the current secretary of the national security council, could replace him in that role.)

The consensus opinion is that the election will likely come down to two men: local oligarch Arayik Harutyunyan and the current de facto foreign minister Masis Mayilyan.

Both have emphasized their support of Pashinyan and the new leadership in Yerevan, though Mayilyan is thought to represent a more decisive break with the past.

Harutyunyan is the head of the largest party in parliament, Free Motherland, and is a former de facto prime minister and finance minister. He also has a wide variety of business interests in the territory including in banking, agriculture, and energy.

Harutyunyan declined an interview request from Eurasianet, but in his formal campaign launch on November 10 he strove to align himself with the Armenian government. “All the forces that today question the actions of the Armenian authorities, especially the prime minister, in connection with the Karabakh issue … are defeatist, conspiratorial forces.”

Harutyunyan “is playing a multi-sided game, he has good relations with everyone,” Baghdasaryan said. “In the past that has made sense, but the logic for that kind of approach is running out.”

“The main barrier for the development of Karabakh has been the merger of government and business, and this is what Harutyunyan symbolizes,” Baghdasaryan added.

Unification back on the table

Mayilyan, a long-time official in the de facto foreign ministry, has promised a “pan-national agenda and programs of radical reforms” if elected president.

In an interview, Mayilyan said that he expected Karabakh to follow the lead of Armenia, where many members of the new government had no previous political experience, instead coming from civil society or other backgrounds. “The same thing should happen here,” he said.

Mayilyan also elaborated on the “pan-national agenda.” He highlighted Pashinyan’s speech in Stepanakert in August in which he said that “Karabakh is Armenia – period!” and led the crowd in chants of “miatsum,” or “unification,” a nationalist slogan from the 1980s calling for the merger of Armenia and Karabakh. That speech caused some consternation abroad, but it was a pivotal moment in Karabakh, Mayilyan said.

“Especially after August 5 … the disagreements that had existed – as Pashinyan called it the ‘dissonance’ between him and our government – after that the page was turned and we entered a different stage,” he said. “I think the rally showed that people support the government of Armenia and Pashinyan in particular.”

Mayilyan’s adviser, Arzumanyan, is working on a formal proposal for “miatsum” between Armenia and Karabakh. And while Mayilyan said that Arzumanyan speaks for himself, he also broadly supported the idea.

“Both in Armenia and in Karabakh there is an active discourse – the theme of ‘miatsum’ has returned to the discourse of Armenia and Karabakh. This is a fact,” he said, attributing that to what he described as Azerbaijani intransigence in the ongoing negotiations.

“If the idea [of unification] becomes popular, it’s natural that political figures will have to take into account what people want. It could become the dominant idea. Here, and in the future in Armenia,” Mayilyan said.