A series of ceasefire violations has led to an unprecedented level of criticism, even as the Armenians of Karabakh still see the peacekeepers as their main guarantor of security. 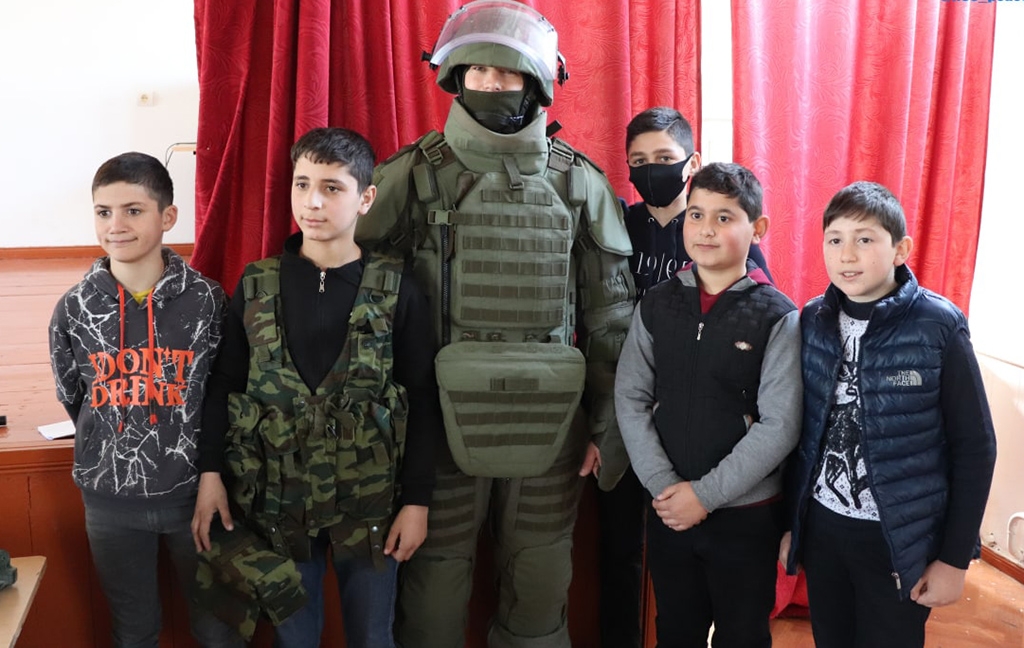 A Russian peacekeeper at an outreach event in Karabakh. (Russian government handout)

But after recent escalations in tensions here, many Karabakh Armenians are doubting those promises.

An outbreak of violence in early August saw two Armenian soldiers killed, at least 19 injured, and allowed Azerbaijan to take a strategic height just north of that road.

The escalation has led to an unprecedented level of criticism of the peacekeeping mission, which after Armenians’ defeat in the 2020 war against Azerbaijan is the only force keeping Baku from continuing its assault.

“Armenians returned [after fleeing in the 2020 war] because the Russians guaranteed them safety. But if they are here, they need to fulfill all their obligations,” Gayane Arstamyan, one Stepanakert resident, told Eurasianet. “Their main job is to protect our lives in our homes, which they are not doing. If they won’t do it, let other international peacekeepers come to Karabakh; we will agree as long as they actually protect and secure us.”

At a cabinet meeting just after the violence this month, Armenia Prime Minister Nikol Pashinyan recalled several other episodes in which Russian peacekeepers stood by as Azerbaijan violated the ceasefire, and gave a stronger reproach to the peacekeeping mission than he ever had before.

Following the flareup, Russia’s Foreign Ministry said the peacekeepers were “making all necessary efforts to stabilize the situation.”

But many here were unconvinced.

Most of the Armenian soldiers injured in the recent violence were wounded by drone attacks, officials in Karabakh’s de facto government said, and to many it called into question Russia’s promises to control the airspace over Karabakh.

One Stepanakert resident, Hasmik Arushanyan, wrote on Facebook, “I am addressing [commander of the peacekeeping contingent Major General Andrey] Volkov personally. At one of your checkpoints, you [the peacekeepers] hung a poster: “Clear skies above Karabakh." Do drone strikes fall from a clear sky? How can I believe and trust you after that?”

The day after the violence peaked, Volkov met with several Karabakh political leaders and activists to discuss the situation, in an apparent admission of the sensitivity of local public opinion. The meeting was not public but afterwards, some of the Karabakhi participants told media that they weren’t satisfied with assurances from the Russians that the incidents would not be repeated.

The Russians explained they did not have enough resources and power to resist Azerbaijani attacks, said one participant, Arthur Osipyan, the head of the Artsakh Revolutionary Party. The next day, a group of Karabakhis, including some of those who were at the meeting, organized a protest in front of the de facto government headquarters in Stepanakert. They carried banners reading "Peacekeepers, where is the peace you promised?", "Stop Azerbaijani aggression", and "Return Parukh and Khtsaberd.”

Most Karabakhis have little contact with the peacekeepers, save for the checkpoints the Russians have set up on the Lachin corridor, the only road connecting Karabakh to the outside world.

“I don’t understand what the peacekeepers are supposed to be doing,” Arstamyan, the Stepanakert resident, said. “I only see how they stop us at every checkpoint to see our documents on our way home. I, a 60-year-old woman, have to show my passport five times to be able to get home. This is certainly not what they were deployed for.”

Many in Karabakh welcomed the peacekeepers when they deployed immediately following the 2020 war with Azerbaijan. The Russians have provided various services to the Armenian residents of Karabakh: handing out aid, supporting reconstruction of destroyed infrastructure, helping secure farmland in areas near the line of contact with Azerbaijani forces, and helping negotiate the return of livestock that stray into Azerbaijani-controlled areas.

But the Russians’ effectiveness appears to have waned following the start of the war in Ukraine, some say.

“Everyone understands that Russia is weaker than ever before in the international arena,” one official in the de facto government told a researcher for the think tank Crisis Group.

“With Baku’s increased importance to Russia, Azerbaijan feels more confident and understands that its boundaries are now wider than before the Russian-Ukrainian conflict,” Tigran Grigoryan, a Karabakhi political analyst, said in a recent interview with RFE/RL. “And we can say that Azerbaijan is also probing some ‘red lines’ of the Russian side, wants to understand when Russia will seriously react to the issue.”

But even as the peacekeepers fail to stop Azerbaijan from repeatedly taking small slices of territory, others argue that it is still only the peacekeepers’ presence that prevents a larger Azerbaijani offensive.

The presence of a 2,000-member Russian peacekeeping mission was stipulated in the ceasefire agreement that ended the 2020 war. Another provision is the withdrawal of Armenia’s own armed forces, and while the Armenian side has given mixed messages on that recently, that withdrawal is either entirely or nearly complete.

“The Russians and Armenians have a common interest in this situation – we need them as a guarantee of safety, and they need us to keep their forces in the Caucasus,” Kristina Balayan, who owns a cafe in the territory’s main city, Stepanakert, and ran for the de facto presidency in 2020, told Eurasianet. “If they do not protect our security and the Armenian residents leave, they [the Russians] will also leave. We need to cooperate to protect our common interests.”