Karabakh: The Anguish of Conflict Lingers for Civilians 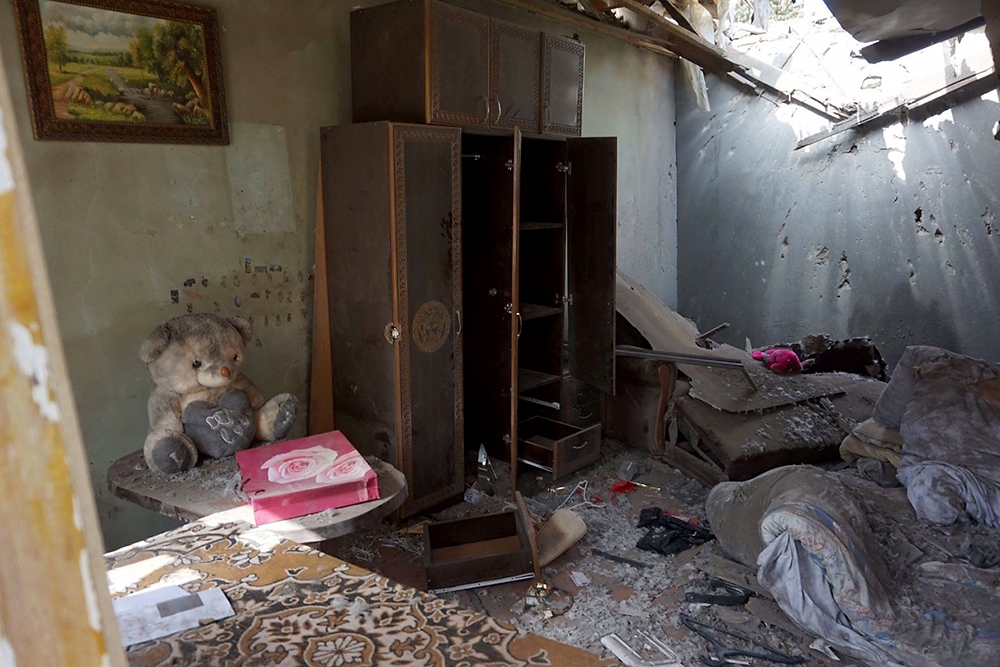 Azerbaijani bombardment of the village of Talish in Nagorno-Karabakh scored a direct hit on this home. The family escaped unharmed before the shell struck. (Photo: EurasiaNet)

Now that the fighting has subsided in the contested territory of Nagorno-Karabakh, civilians on the Armenian side are struggling to restore a sense of normalcy.

Thirty-four-year-old Lilit Ohanian, a teacher in Mataghis, one of the frontline villages that was caught up in the April 2-5 fighting, recounted that an intensive Azerbaijani assault prompted her to flee from her house in her nightgown, taking her four children in hand.

Ohanian, who is now living with her children in a village outside of the Armenian capital, Yerevan, described the experience as “déjà vu.” She was also displaced, she said, during the hot phase of the conflict, lasting from 1988-1994. “When I was 10, I can remember my mom holding my hand and fleeing in the same way to save our lives. Now, I did the same with my 10-year old,” she recounted. “History gets repeated.”

Many Armenians interviewed by EurasiaNet.org said that the brutality of the early April bout of fighting eclipsed that which they remembered during 1988-1994, a period when hundreds of thousands of people were displaced and tens of thousands killed.

Gayane Nazunts is another Armenian who is trying to come to terms with tragedy. She learned via the Internet that Azerbaijani soldiers allegedly had shot and killed her elderly parents, Valera and Razmela Khalapian, along with her 92-year-old grandmother, Marusya Khalapian, in their home in the tiny village of Talish, in northern Karabakh.

Online photos of the Khalapians’ bloody bodies have helped prompt calls in Armenia for an international investigation into the Azerbaijani army’s conduct during the early April fighting. Nazunts told EurasiaNet.org that when the attack on Talish began, she was in the village but could not reach her parents’ house, located on the outskirts along a road leading into town. Together with her four children, Nazunts fled the hamlet, eventually taking refuge in a brother’s house in the Armenian city of Abovian, roughly 380 kilometers to the west.

Safety concerns kept her from returning to Karabakh for her parents’ and grandmother’s funeral. Only roughly two weeks after their April 2 deaths was she able to visit their graves. “Nobody knows what to say, how to console the people who lost their relatives and households,” said Nazunts’ sister-in-law, Malina Nazunts. “This is a pain with no end in sight.”

The fighting in early April resulted in dozens of casualties and wounded on all sides, as well as, according to UNHCR, the displacement of hundreds of “mostly women, children and older people.” Many headed to Armenia proper to find temporary lodgings with family and friends. Men stayed behind to keep an eye on their property.

Locals tell a different story. “The village is in an awful state,” claimed Melita Khalapian, board chairperson for the Talish Fund, a local fundraiser.

In addition to the deaths of the Khalapians in Talish, officials in Armenia and Karabakh allege that Azerbaijani forces mutilated the corpses of 18 Karabakhi soldiers, and beheaded one Armenian soldier’s corpse. Photos of the 18 bodies have been released. The circumstances of the beheading remain murky. An international investigation has not yet commenced.

At an April 9 press conference in Yerevan, James Warlick, the American co-chair of the Minsk Group, which oversees the stalled Karabakh peace process, described the Group as “deeply distressed” by the photos and reports of alleged atrocities, but no further statement has been made.

Authorities in Yerevan contend that Azerbaijani forces committed war crimes, including the indiscriminate firing of mortars at civilian areas. Armenian Foreign Minister Edward Nalbandian told Armenian Public Television in mid-April that his ministry has sent “an appropriate letter” to the UN High Commissioner for Human Rights, and stated that “the process will continue.”

Spokesperson Tigran Balaian told EurasiaNet.org that the ministry is “preparing packages with solid evidence to be sent to the appropriate destinations” for international organizations to consider the matter further.

Yerevan also has floated the idea of an international war crimes tribunal, a body that Baku has said it would welcome. Azerbaijan claims Armenian soldiers committed atrocities as well, but, so far, it has not elaborated on its claims.

Marianna Grigoryan is a freelance reporter based in Armenia and editor of MediaLab.am.