Karabakh villagers wary of returning to showcase village on frontline

“So what if there's a new school if your life is in danger?” Elmira Sahakyan's son was seven days old when war broke out in her village. Artillery shells fell on her house and her family, along with the roughly 200 other families in Talish, was forced to flee.

Undaunted, Armenians are now rebuilding Talish. They have constructed new houses, a school and kindergarten, a cultural center and events hall, and even decorative sidewalks – all funded by an Armenian-American benefactor.

But two years later, Sahakyan's son is a toddler and her family still hasn't returned home. They live in an internally displaced persons camp about 30 kilometers away, supported by aid supplied by the Red Cross. Her husband is a soldier serving in Talish, and he has told her that the Azerbaijani positions make it too dangerous to bring the family back. The government has repeatedly assured residents that it is safe to go back, but she doesn't believe them.

Talish lies right on the line between the unrecognized republic of Nagorno-Karabakh, the territory which is internationally recognized as part of Azerbaijan but has been controlled by ethnic Armenian forces since 1994, and Azerbaijan proper. It was briefly taken by Azerbaijan during the 2016 fighting, before Armenian forces managed to take it back days later. The village was totally destroyed, and saw some of the most notorious atrocities of the conflict: according to Armenian press reports, Azerbaijani soldiers allegedly killed three elderly civilians who were unable to flee and mutilated their bodies, cutting off their ears. 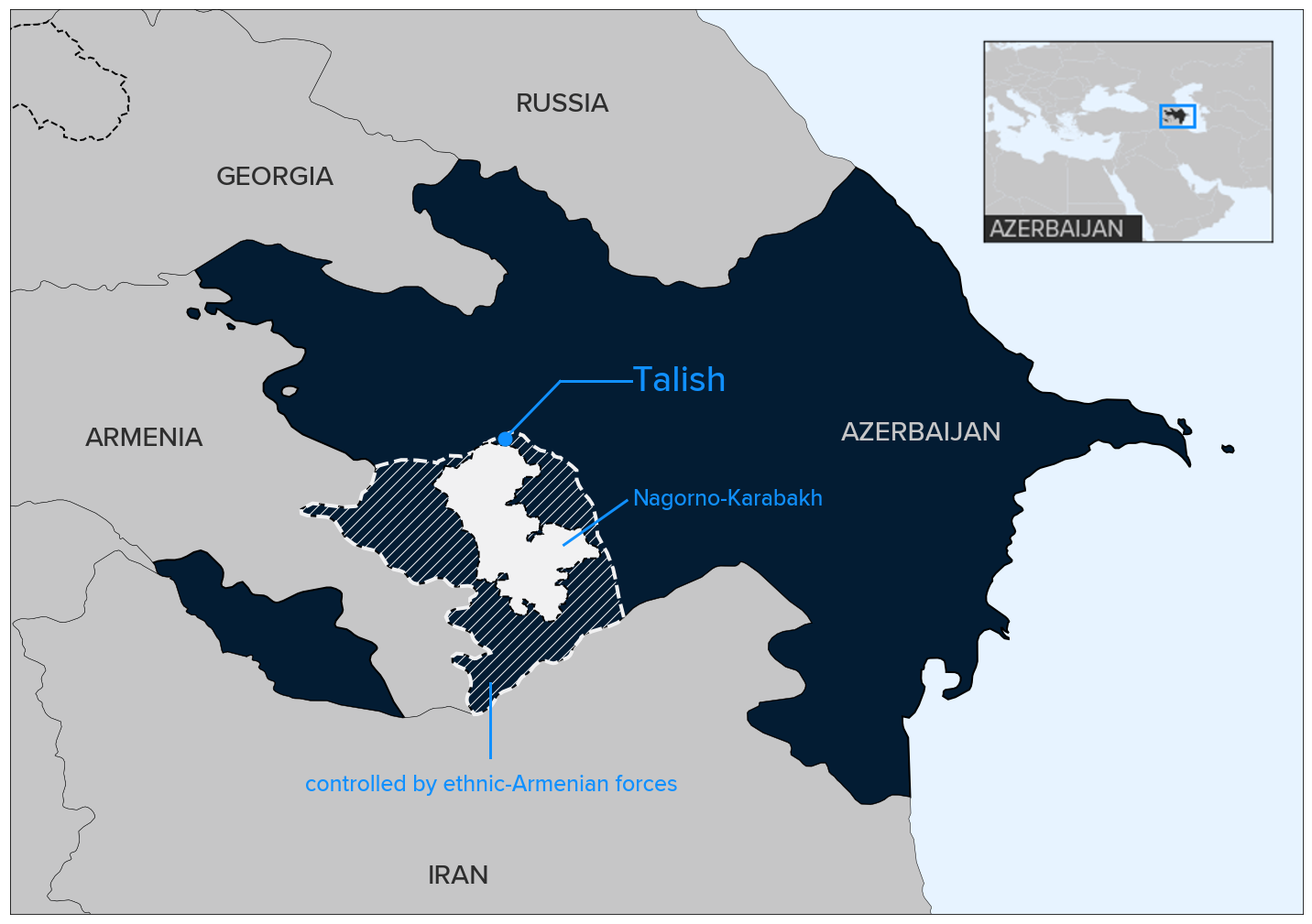 Since then, the reconstruction of Talish has become a heavily publicized cause célèbre among Armenians, representing a symbolic rebirth after dispiriting losses in 2016. The territory's de facto president, Bako Sahakyan, visits regularly, and in May the village saw its first post-war wedding, widely covered in Armenian media (though the newlyweds don't actually live in Talish).

But the need for a morale boost is clashing with the basic needs of the people who are supposed to live in Talish.

“So what if there's a new school if your life is in danger?” asked Zhora Oganyan, a father of two who also was displaced from Talish. “Now they're above the village and they're attacking, with machine guns, mortars, they're shooting at the village. How can we go back?” he asked. “It's dangerous. [...] If I go back, it will be without my children.”

Officials downplay the danger of living in Talish. Vitaly Balasanyan, the secretary of the national security council, who is overseeing the reconstruction of Talish, said that Stepanakert – the de facto capital of Nagorno-Karabakh – is more dangerous because Azerbaijan has targeted it with missiles, while it targets Talish only with artillery. In an interview with Eurasianet, Balasanyan said that “if it's necessary” he will himself move to Talish with his family and commute to work every week to Stepanakert.

In any case, he adds, “during a war no place in Karabakh is safe.”

Levon Apresyan, the government's special representative for Talish, gave Eurasianet a brief tour of the village in his jeep. At the highest point of the village, on a rutted road lined by abandoned houses, he pointed across an empty field. “You can see them looking at us now, before they weren't there,” he said. “Of course it's a threat, but we don't pay attention. We're building, we're going to live here, this is our land, our home.”

For now, about 30 people – mainly soldiers and construction workers – live in Talish, but Apresyan said he expects about 250 to move back. The authorities have set September 1, the first day of the next school year, as the date by which they expect most of the displaced residents to come back.

A civilian population was necessary to keep Talish safe, Apresyan said. “If there aren't civilians here, if [Azerbaijan’s] soldiers look here and see that no one is living here, it's going to encourage them even more,” he said. “That's why we can't leave our territory without people – people keep the land.”

The new buildings in Talish all have plaques, in Armenian and English, noting that they were sponsored by Antranig Baghdassarian, a California dairy magnate who donated $5 million for the reconstruction. Baghdassarian, who declined to be interviewed for this article, made his donation via the Hayastan All-Armenia Fund, an umbrella organization coordinating the aid offered by diaspora groups around the world for development projects in Armenia and Nagorno-Karabakh. The fund has called the reconstruction effort the “Talish Revival Project.”

“It's a symbol of striking back, not with weapons but with positive rebuilding, seeing new families form on that land,” said Vardan Partamyan, the fund's Head of Projects and External Relations.

Talish also holds historical importance for Armenians: It was one of the “Five Melikdoms,” feudal principalities that were part of the Persian Safavid Empire but which were ruled locally by Armenians with a high degree of autonomy until the 19th century. “To understand the importance of Talish, historically, these parts of the Armenian world were the last ones to have their own statehood,” said Ruben Melikyan, the Nagorno-Karabakh’s de facto state human rights ombudsman. “It's important from the historical point of view, the cultural point of view. That's why that village has so much importance for us.”

Another village that was destroyed in the war, Mataghis, was not receiving the same attention because it lacked the same resonance as Talish, Melikyan said: “It doesn't have the same sort of historical and cultural importance and that's why you don't see as much publicity,” he said. “People are very interested in Talish.”

Partamyan acknowledges a tension between the reconstruction symbolism and its practical aspects. “There is so much you can ask people to do patriotically, and say, 'This is the Armenian border and it's important that people live on the border.' But people are people and they want to have safe and normal lives,” he said.

Still, he argued, the security situation is improving. “One positive thing I've been hearing from the community is that in the last two to three months there has been relative calm. The caliber and intensity of weapons used in 2016, and some periods in 2017, was rising significantly. So you have not just small arms fire but you have rocket launchers, grenade launchers, large-caliber machine guns indiscriminately. But [lately] there has been relative calm.”

Those assurances are received warily in Alashan, the site of the camp for displaced residents from Talish, including Sahakyan and Oganyan. About 175 former Talish residents now live in Alashan with some in a disused military hospital and others living in temporary prefabricated housing erected nearby. The Red Cross provided them with cows, pigs, and bees, as well as seeds to start gardens.

“The Red Cross are the only ones helping us, the government isn't doing anything,” said one resident, Gurgen Ghukasyan.

Of those that Eurasianet surveyed in Alashan, none were ready to go back to Talish. “We will live here for now – we have water, a garden,” said Sahakyan.

“We don't know yet,” said another young mother, who asked not to be named. “As long as the Azerbaijani positions are there, it's dangerous.”

Joshua Kucera is the Turkey/Caucasus editor at Eurasianet, and author of The Bug Pit. Map produced by Pedal Technologies.