Karabakh: What to Make of the Fresh Diplomatic Round? 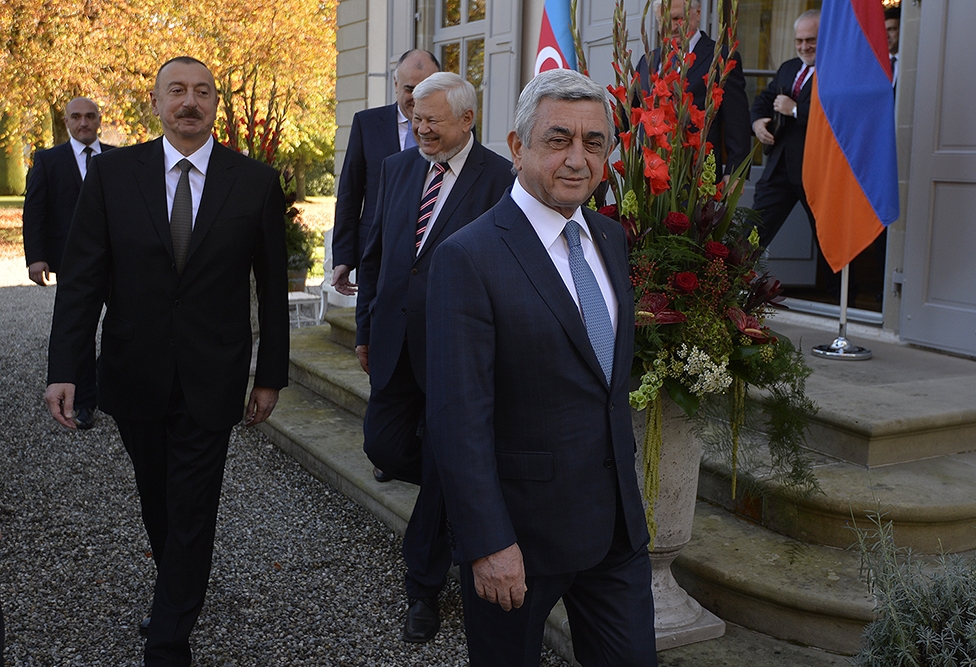 With relative quiet continuing on the Armenian-Azerbaijani Line of Contact, bilateral negotiations were set to resume a full month after Serzh Sargsyan and Ilham Aliyev held talks in Geneva, Switzerland, described as “constructive” by the mediators. While both presidents have made clear that they disagree on the key matter of Karabakh’s status, both agreed that it was necessary to reduce frontline tensions for a new round of talks.

Preliminary ground work is being prepared. Sargsyan met with Russia’s President Vladimir Putin on November 15. Putin had already met with Aliyev two weeks earlier. Also this week, Armenian and Azerbaijani foreign ministers met with American, French and Russian co-chairs of the OSCE Minsk Group, whereas Russia’s foreign minister Sergei Lavrov announced plans to visit Baku and Yerevan on November 19-20. A meeting of Armenian and Azerbaijani foreign ministers was expected to take place in the near future, presumably followed by another presidential summit.

This latest round of talks is taking place in the context of intensified contacts between Russian and Turkish leaders, amid their shared antagonism towards the United States and the European Union. The Russia-Turkey talks have focused on achieving a ceasefire in Syria, where both countries have troops on the ground that support opposing sides.

“Turkey will also continue to act in solidarity with Azerbaijan in its just cause of getting upper Karabakh back from Armenia,” Erdogan told Turkish media on November 1, after his visit to Baku. “I will talk about the matter with Russian President Putin when we meet next week or the week after. His attitude is very important. If he really focusses (sic) on the matter, it will be easily resolved.”

However, neither Erdogan nor Putin mentioned Karabakh in their statements for the media after their November 13 talks. Both leaders were to meet again on November 22, this time in a trilateral format with Iran’s President Hassan Rouhani for talks on Syria. Erdogan had brought up Karabakh with Putin on several occasions in the past.

Azerbaijan has long sought to build international pressure against Armenia, but only Turkey and a few other countries at the Organization of Islamic Conference have overtly sided with Azerbaijan in the conflict. Even Turkey’s support appeared shaky in 2008-9, as it negotiated normalization of relations with Armenia. Aliyev was able to maintain Erdogan’s support for Azerbaijan’s position not least through billions of dollars of investments in Turkey’s energy and transportation infrastructure, some of them directly involving Erdogan’s family.

Since Russia-Georgia war of 2008, Azerbaijan re-focused its attention on Russia, seeking to sway President Putin’s position in its favor. While the Russian leadership approved the sale of billions of dollars of military equipment to Azerbaijan and Aliyev’s official rhetoric became aligned with Russia on the matter of Western “meddling,” Russia also sold advanced missile systems to Armenia and warned Azerbaijan against resuming large-scale hostilities.

Last month, chair of the Russian Senate’s foreign affairs committee Konstantin Kosachev again reminded Baku of Georgia’s 2008 experience, suggesting that any resumption of fighting would only help formalize Nagorno Karabakh’s separation from Azerbaijan. Lately, in other Karabakh-related conversations, Russia and Azerbaijan have also been going through a rough patch, with Aliyev-controlled media suggesting that these misunderstandings were caused by foreign minister Lavrov, because he is partially of Armenian descent.

Putin himself appears to believe that an attempt to shift the Karabakh status quo – either in Azerbaijan’s or Armenia’s favor – would hurt broader Russian interests and is not eager to do that. However, Russia might be interested in building up an alternative, regional states only format for conflict resolution, as it has been doing with Turkey and Iran on Syria, to illustrate the limits of Western influences. With Washington’s and Brussels’ appetite for supporting former Soviet republics mostly lost, France and the United States have long acquiesced to Russia’s leadership role in Karabakh talks, and supplanting the Minsk Group with a regional “concert of powers”-type arrangement would help formalize that.

For Sargsyan and Aliyev, these meetings, photo opportunities and associated commentary are important ways of continually reasserting domestic leadership. Sargsyan, in particular, will be concluding his final term as president in April 2018, when executive power transfers to a prime minister picked by parliamentary majority. While his specific role has not been made clear, Sargsyan is expected to remain leader of the ruling party and has expressed a desire to remain Armenia’s chief decision-maker on matters of national security. Azerbaijan is also expected to hold a presidential election in 2018 and, although that appear unlikely today, a speculation is building that Aliyev could transfer the presidency to his spouse, Mehriban Aliyeva, who was made first vice president earlier this year.