The restoration has sparked arguments about whether the mosque should be considered “Persian” or “Azerbaijani,” and some locals question whether the Armenian-controlled territory should be rebuilding its mosques at all. 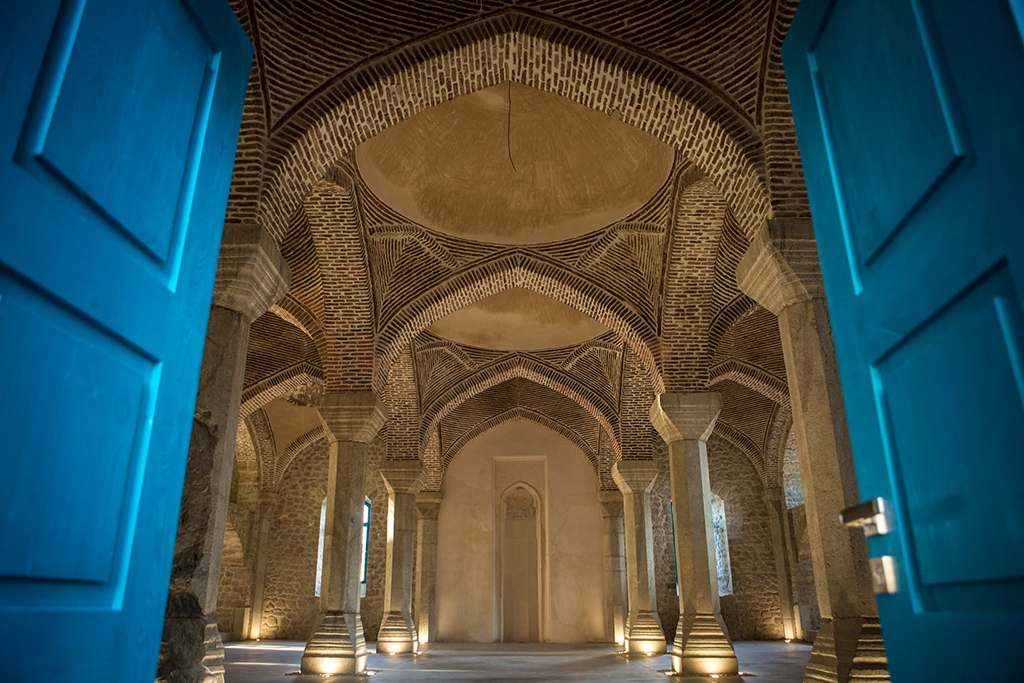 The authorities in Nagorno-Karabakh have restored a 19th century mosque, the first Muslim monument to open as a tourist attraction in the entirely Christian-populated territory.

But the mosque renovation has been poorly received, both by its Armenian neighbors and by the Azerbaijanis whose kin once worshipped at it.

The Govhar Agha Upper Mosque was built in the 1880s in Shusha, then the largest town in Nagorno-Karabakh. When the area fell under Soviet rule in the early 20th century, it was turned into a museum. The mosque was damaged during the war between Armenians and Azerbaijanis over Karabakh in the early 1990s, and then fell into disrepair after the town’s Muslim residents all fled.

After a five-year effort, the compact mosque has now been handsomely restored and was formally reopened at a ceremony in October.

The mosque is “an inseparable part of the multi-cultural heritage of Shushi” and its restoration was “designed to preserve and enhance the historic and architectural heritage” of the town, Suren Amirbekyan, the manager of the Artsakh Development Program at the IDeA Foundation, which funded the restoration, told Eurasianet. (Armenians spell the city with an "i.")

Authorities in Karabakh also hope it will also drive tourism to Shusha, the historic center of the region. “Of course the restoration of the mosque will also bring more tourists, not only Muslim tourists but also of other religions and non-religious tourists, because it’s a very beautiful building architecturally,” Artak Grigoryan, the head of the Department of Tourism and Historical Environment Protection at the de facto Karabakh Ministry of Culture, told Eurasianet. 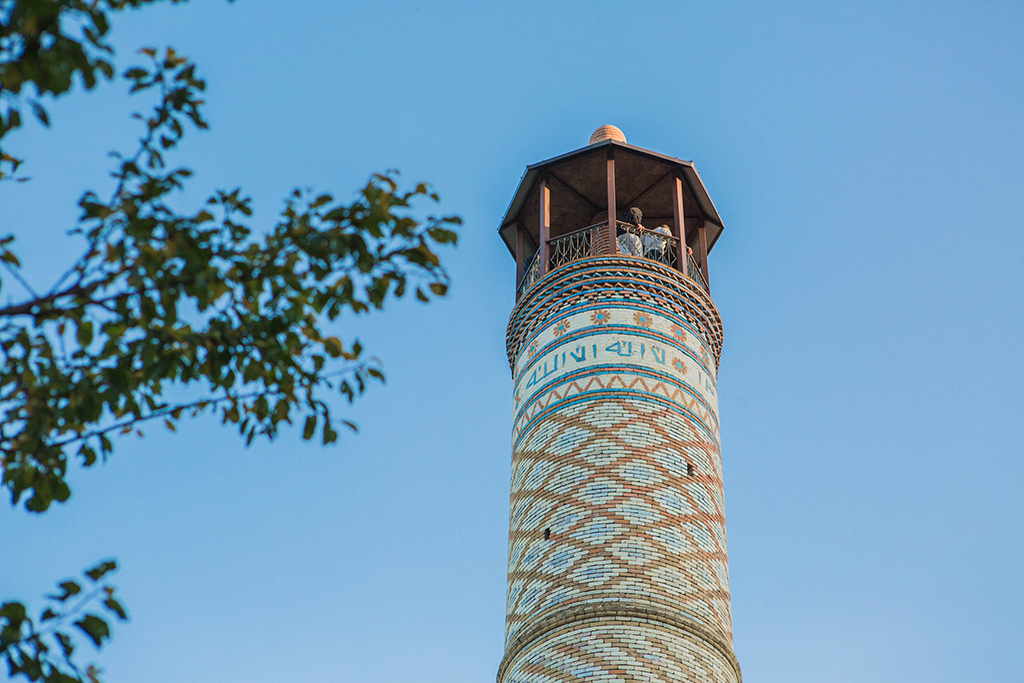 But in Karabakh, the reconstruction of a mosque is a sensitive issue.

The territory is now populated entirely by Christian Armenians following the war with Azerbaijan, which resulted in more than 600,000 Muslim Azerbaijanis fleeing Karabakh and the surrounding regions that are now occupied by Armenian forces. Karabakh is internationally recognized as part of Azerbaijan and the government in Baku insists that it will again control the territory, either as the result of peace negotiations or by force. Karabakh’s current residents see Azerbaijan as an existential threat.

A 2017 progress report on the project from the IDeA Foundation noted that: “Negative perception of the project is … mainly typical of individuals who associate the mosque with Azerbaijan and who believe there are more priority areas for investment at present.” But it also characterized the resistance as “very rare.”

Grigoryan characterized the current local perception of the mosque restoration as “mainly a positive attitude.” He said that while some residents initially objected, that was based on the belief that the government was funding the restoration and that resistance dissipated when people learned that the money was instead coming from private donors. 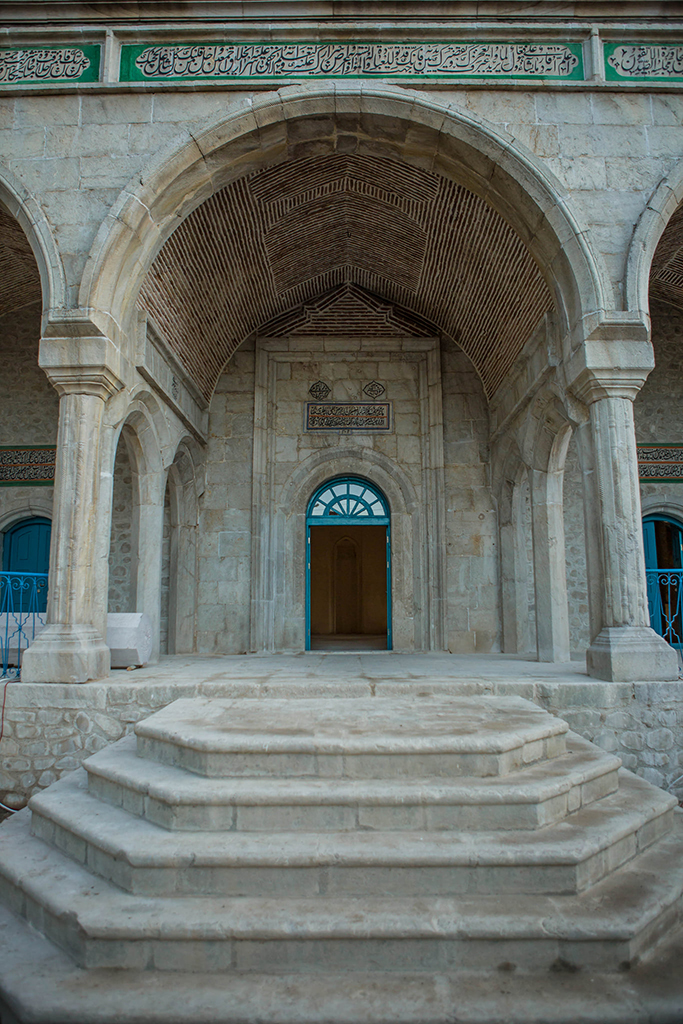 But when Eurasianet visited Shusha, an informal survey of residents found that opinions remained mixed, at best, and that there was considerable ambivalence about Muslim historical sites there.

“The ministers and the officials wanted it, but people didn’t,” said Artur Pogosyan, who sells fruit out of a truck parked next to the mosque. “People think that, if there is a mosque here, after many years they [Muslims] will think that this is their land.”

“Personally, as a monument, I like it,” said Nune Hakobyan, a teacher in Shusha who was walking by. “But as a mosque…” she paused. “This is a Christian land.”

At the time the mosque was constructed, Shusha had a population mixed between Armenians and Azerbaijanis. Starting in the early 20th century, however, strife between the two communities grew, as it did across the Caucasus. In 1920, Azerbaijani armed forces carried out pogroms against the Armenian population, reducing it to nearly zero. As a placard at the city’s history museum puts it: “The city’s rich Armenian character had been destroyed, and the possibility of multi-ethnic coexistence had been lost forever.”

Today, what remains of Shusha's Azerbaijani character has been mainly erased, as well, aside from a few monuments, most of them in poor repair. And those tend to be portrayed as peripheral to the town’s true nature.

“Today, there are no Muslims in Shoushi [sic],” reads a brochure handed out at a tourist information booth. “But there are a lot of fine examples of traditional Muslim architecture which work harmoniously with Shoushi’s Armenian architectural style.”

In the conflict between Armenians and Azerbaijanis, cultural heritage sites are a key battleground; both sides accuse the other of neglecting, distorting, or even destroying the others’ historic sites.

Officials in Karabakh have used the mosque reconstruction to claim that, unlike Azerbaijan, they protect and maintain monuments of the other side’s history. “IMPORTANT TOLERANT STEP IN #ARTSAKH/#KARABAKH” tweeted the territory’s human rights ombudsman, Artak Beglaryan, when the mosque was reopened.

But the fact that the reconstruction project has invariably referred to the mosque as “Persian” has rankled Azerbaijanis, who see it as part of their heritage.

The rebranding of the mosque, they say, is an attempt to erase their history in Shusha.

“The Armenian invaders are trying to change the architecture of this architectural monument of our people and design the mosque as a "Persian mosque," the Baku-sponsored Azerbaijani Community of Nagorno-Karabakh told local media. “Armenia falsifies history and tries to rewrite it.”

Drawing sharp lines between “Persian” and “Azerbaijani” in reference to 19th-century Caucasus history is anachronistic; national identity among the Muslims living here was much more fluid than it is today. The people who originally worshipped at the mosque would have been variously identified as “Azerbaijanis,” “Turks,” or “Tatars;” they would have spoken a Turkic language related to modern Azerbaijani in informal situations but used Persian in official or literary settings.

Grigoryan, of the Ministry of Culture, said that the decision to deem the mosque “Persian” was made by the Iranian architects who carried out the renovation; attempts to reach the architects were unsuccessful.

“Historical sources proved that it was Persian. Let’s do it in a scientific way, not political,” Grigoryan said. “When I start to talk about history, it will bring more and more disputes.”