Karabakh’s elections end in a whimper

The territory has a new de facto president, but he will come into office with his legitimacy in question. 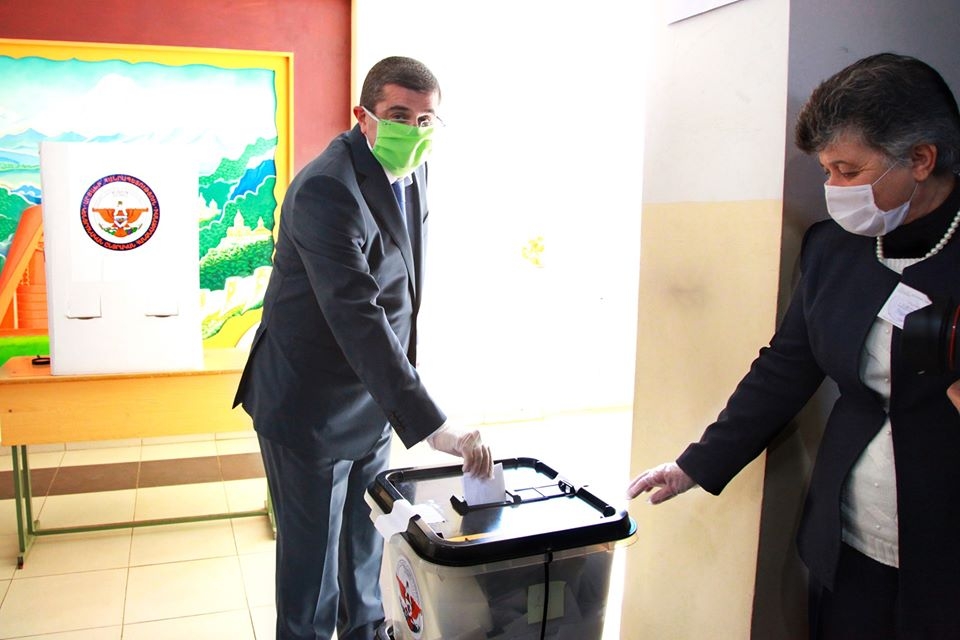 Nagorno-Karabakh’s elections have ended in a whimper, as the second round has produced a winner but fell short of early expectations for a dramatic, democratic change in the territory.

Arayik Harutyunyan was effectively the only candidate in the April 14 runoff vote for de facto president of Karabakh, as the second-place finisher in the first round, Masis Mayilyan, asked his supporters not to vote in the second round.

Turnout was accordingly relatively light: just under 45 percent, compared to more than 72 percent in the first round. Harutyunyan won more than 87 percent of the vote.

The election took place under an “emergency situation” in the territory, which was declared on April 12 following the first recorded cases of the novel coronavirus there. As of the time this post was published, there were six residents of Karabakh diagnosed with COVID-19.

Many had argued that the first round of the elections, on March 31, should have been postponed because of the coronavirus threat. Although by that point no cases of the disease had been registered in Karabakh, the territory sees regular traffic in and out of Armenia, which has had a quickly spreading outbreak. Further, the election brought in hundreds of election observers from Armenia. None of the cases of the disease in Karabakh have been traced to election-related travel, but at least one of the diagnosed reportedly voted in the first round.

The results of the first round were further clouded by negative assessments by the Armenian monitors, which documented evidence of a large vote-buying scheme favoring Harutyunyan. The former prime minister and businessman nearly won that round outright, with 49.6 percent of the vote.

Mayilyan’s stated reason for effectively dropping out of the second round was to minimize the spread of coronavirus, but his supporters and other opposition figures have been calling into question the legitimacy of the first-round results given the violations that were observed.

“Elections conducted when most of the population either wasn’t able or wasn’t willing to participate raises serious questions about the legitimacy of the incoming government,” Tigran Grigoryan, a political analyst and unsuccessful candidate for parliament for an opposition party, told the news site Caucasian Knot following the second round vote.

“The transfer of power in countries where the political system has been relatively closed for many years is problematic,” said Yerevan-based analyst Alexander Iskandaryan, in an interview with the Institute for War and Peace Reporting. “The coming to power of Arayik Harutyunyan in the circumstances when his political rival Masis Mayilyan actually refused to participate in the second round can greatly weaken his legitimacy.”

The murky results of the vote were all the more disappointing given the high hopes that had been initially placed on them. The first elections since the 2018 “Velvet Revolution” in Armenia, they were expected to bring some measure of those changes into Karabakh.

“These elections should have been a great event for Karabakh for its democratization and international image, since it was expected that these would be the first free and fair elections in the entire history of the republic,” Grigoryan said.

While Harutyunyan has positioned himself as an ally of Armenian Prime Minister Nikol Pashinyan – the leader of the “Velvet Revolution” – his reputation as an oligarch makes him far from an ideal partner for the Armenian PM and his anti-corruption agenda.

It will nevertheless be an easier relationship for Pashinyan than the outgoing leadership of Karabakh, which was closely tied to the Armenian regime that Pashinyan toppled and which on occasion openly opposed Pashinyan.

The day after the vote, Harutyunyan sought to play down the reports of election irregularities.

“No election is perfect, not even in much more developed countries,” he wrote on his Facebook page. “When our international colleagues visit our region after a while, they will be able to assess our commitment to exercise fundamental human rights and compare us with certain recognized countries.” (No country recognizes the independence of Karabakh, which broke away from Azerbaijan during a war as the Soviet Union collapsed. Its status is still the subject of negotiations between Armenia and Azerbaijan under international mediation.)

Harutyunyan will take office on May 21. Mayilyan has said he will return to his job as Karabakh’s de facto foreign minister.