The upheaval in Armenia echoes similar instability in Azerbaijan after it lost the same territories in the 1990s. 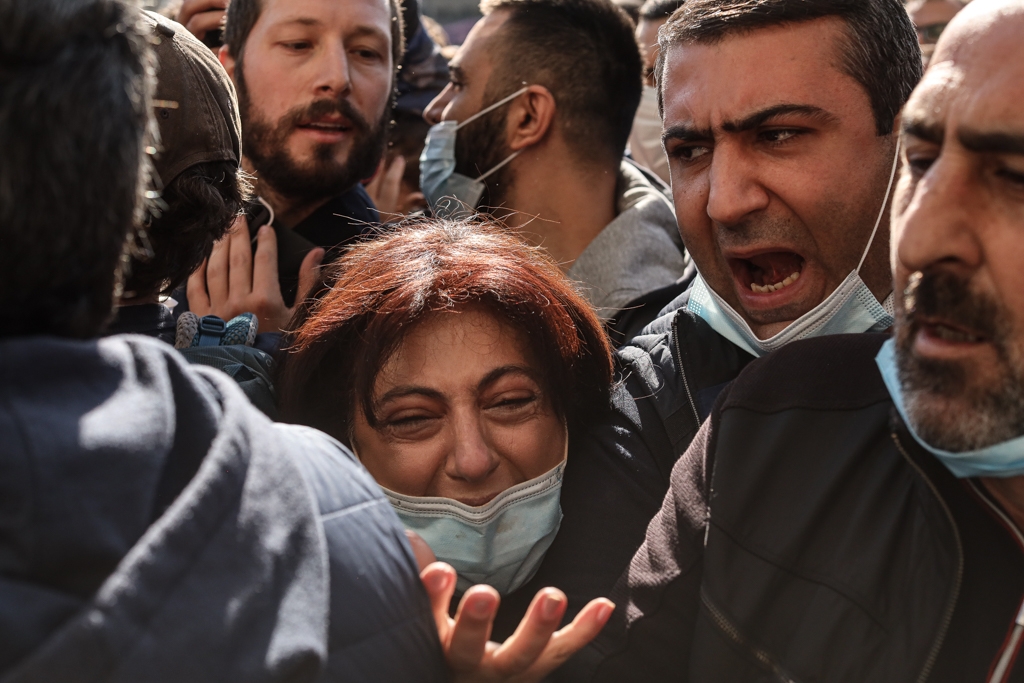 Protesters in Yerevan react to the truce. (photo: Jonathan Alpeyrie)

“It is good that there is a ceasefire right now, but there is no more Shushi,” laments 59-year-old Hamlet, a veteran of the 1990s Nagorno-Karabakh war. Speaking from a cot in a displaced persons processing center in the suburbs of Yerevan, he describes how his hometown is gone. “Shushi is in ruins and everyone has left. They have spread all over Armenia and I don’t know where anyone is.”

The fall of the strategic town, which Azerbaijanis call Shusha, triggered Armenia’s capitulation on November 10 after six weeks of war. While historically significant for both Armenians and Azerbaijanis, the town had a majority Azerbaijani population before the war in the 1990s. With the Armenian victory then, the Azerbaijanis fled and Armenians became the sole inhabitants. Its capture by Azerbaijani forces has effectively expedited a new round in the cycle of displacement that has come to define Nagorno-Karabakh.

After the fall of Shushi, Armenian Prime Minister Nikol Pashinyan signed a Russia-brokered ceasefire that handed control to Azerbaijan of most of the territories Armenia had held since a 1994 ceasefire. With the stroke of a pen, thousands of displaced Armenians lost their homes.

The announcement has shaken Armenia and awakened nationalist forces that were largely marginalized by the ascent of the reformist Pashinyan in his 2018 “Velvet Revolution.” After Pashinyan announced defeat on Facebook in the middle of the night, thousands of demonstrators poured into the streets of Yerevan to condemn the prime minister, calling him a traitor and a sellout.

At a shelter across town, however, the fury was conspicuously absent. Such accusations served little purpose for people who had just lost everything. Some blamed the “Turks” – both an Armenian slander for Azerbaijanis and recognition that archfoe Turkey backed Azerbaijan’s military in the war – for their plight, but overall, a strong sense of resignation and fatigue dominated the mood.

“I blame war,” professes 48-year-old Garik Yeganyan. “Because of war we have lost everything.”

Yeganyan had to escape his village near Hadrut through the forest while Azerbaijani forces bombed from the air. His home is now under Azerbaijani control, most likely for good.

“So many of our young people died, so many people were hurt. […] At least with the ceasefire the killing has stopped. However, we feel hopeless because we will not be able to go back to our homes.”

His sentiment was echoed by 51-year-old Hasmik, from the Martuni district. Both of her sons fought in the war and one was wounded, but the ceasefire meant they survived: “I am not a politician, I am just glad my sons came home alive. That is the most important thing in the life of a mother.”

In the days immediately after the surrender, a sense of disbelief dominated Armenia. The idea that so much territory could be lost after seemingly having the upper hand for 30 years was unfathomable. The shock collided with confusion. Russian state media published a map showing how the territories were to be divided and where incoming Russian peacekeepers would be stationed. The map lacked crucial details about which exact villages will remain under Armenian control.

“I am too afraid to go back. I don’t know if there are Azeris in my village, but they are in the areas all around,” explains Jana Khachatryan from the Martuni district. “But if something changes, I will return.”

For some, the ambiguity leaves a glimmer of hope. The situation on the ground remains fluid and it seems even the authorities don’t have a clear view of where exactly the lines will be drawn. At the shelter in suburban Yerevan, the chaos is also causing anxieties for the volunteers.

“[The inability of the displaced to return is] something we never considered to be a possibility,” explains Luca Keushguerian, an American-Armenian volunteer. “We knew that they were going to be here for a pretty long time, but we never factored in the possibility that some of these people will never be able to go back.”

Luca and his father Vahe have been managing a network of shelters with private donations. It is largely charities supporting the tens of thousands who have fled into Armenia. (These people are not refugees, but spontaneous arrivals – because though they have crossed an international border, most hold Armenian passports.)

“Three days ago, I went to a store and bought four soccer balls just because they were needed,” explains Luka. “For the work we’re doing,” he added, “we get zero government assistance, literally zero.”

With the government overwhelmed, it is not clear whether Armenia will have the resources to handle a protracted migration crisis. The idea that Armenia could lose control of large parts of Karabakh was never considered. While nationalist and opposition parties have started exploiting the war to mobilize against Pashinyan, politics seems to matter little for those most affected by the conflict.

The upheaval in Armenia echoes similar instability in Azerbaijan after its loses in the 1990s, when some 600,000 displaced Azerbaijanis found themselves a marginalized community in their own country. As the current war winds down and the struggle in Armenia turns inward, the displaced people of Nagorno-Karabakh also look like pawns.

“My hopes for the future are nothing now,” professes 28-year-old Irina Safarian, who lost her home when Azerbaijani forces took control of Hadrut. “It’s a big game between Russia and Turkey and there are only civilians suffering in this game.”

Adrian Hartrick is a filmmaker and writer focused on the Middle East and the Caucasus.