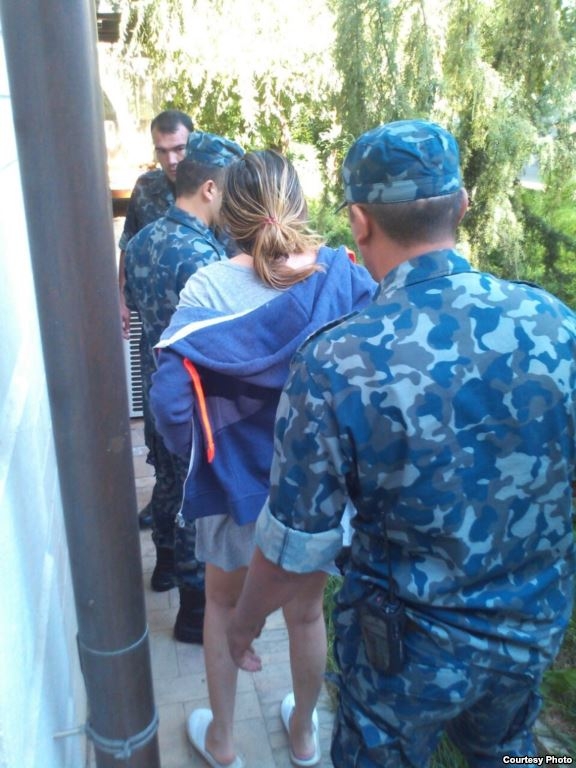 Several photographs showing Uzbek President Islam Karimov's once-powerful daughter during her alleged house arrest have been released to the media.

Dressed casually in a sweatshirt and slippers, the photographs show her in what appears to be a tense standoff with the three men in blue fatigues.

The images were distributed to the media September 16 by the 42-year-old's Britain-based spokesman, Locksley Ryan, who said in an e-mailed statement that Karimova and her daughter are in "urgent need of medical attention."

"To add to this, those keeping her and her daughter prisoner have decided to inflict a program of systematic starvation, preventing any food from reaching them," Ryan said.

Karimova, 42, was a wealthy businesswoman living mainly in Europe until a corruption scandal last year led to setbacks that included the closure of her businesses, the arrest of friends and associates, and her alleged confinement in a Tashkent house.

On September 8, a woman identified as "G. Karimova" was identified by the Uzbek Prosecutor-General's Office as a suspect in a graft case.

Ryan said Karimova "is being held for purely political reasons" and linked her detention to the planned presidential elections in Uzbekistan early next year.

"During this campaign, the backing Gulnara continues to receive appears to pose a threat to those who have surrounded her father and who are keen to cling on to the unhealthy influence this affords them," Ryan said, adding that Karimova "has no interest whatsoever in the politics of today's Uzbekistan."

There was considerable speculation before her fortunes took a turn that she might be groomed to succeed her father, who has dominated Uzbekistan for 23 years.

Karimova said in recordings obtained by the BBC last month that she and her daughter are being treated "worse than dogs."