The Nur Zholy crossing has seen lines up to 50 kilometers long. 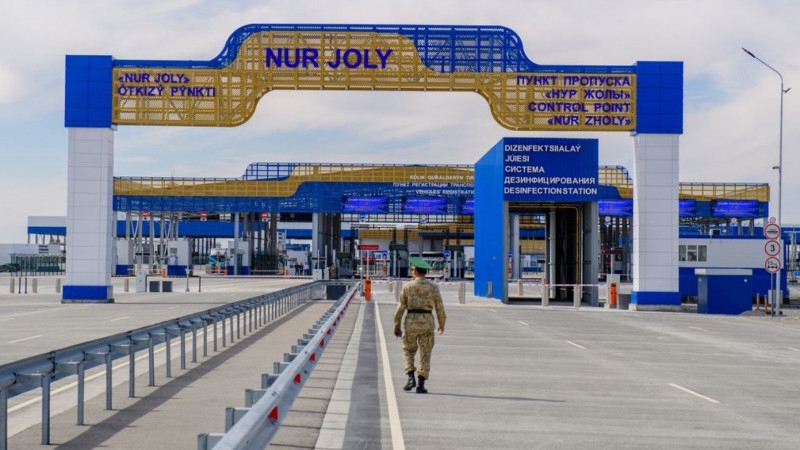 Not so jolly: This border crossing is supposed to see thousands of vehicles passing through daily. (Photo: Kazakhstan government website)

Kazakhstan is to start allowing Chinese freight drivers into border crossing areas visa-free for up to 24 hours as a way of easing the passage of traded goods.

The Finance Ministry said on July 23 that the trucks will under the new rules be allowed to unload goods in intra-border logistical facilities, but that Kazakhstan-based freight carriers will then transport those goods into the country.

The flow of goods between the two neighbors has been severely constrained by intensified checks instituted as part of Beijing’s coronavirus-mitigation efforts. Sputnik news website has noted that only 20 vehicles were being allowed into China from Kazakhstan at the height of the intensified inspection regime. That number was increased to 100 after talks, but then the movement of vehicles into China was suspended altogether earlier this week.

Huge lines had formed in June at the Nur Zholy border crossing, which marks the location of the Khorgos special economic zone, in the wake of restrictions imposed by the Chinese authorities. One rule limited the amount of time that Kazakh freight truckers could spend on Chinese soil to 12 hours. That limit was later increased to 24 hours.

Truckers have complained to journalists that the lines at Nur Zholy at recent times stretched up to 50 kilometers. When the crossing was inaugurated in September 2018, officials boasted it would be able to process the passage of around 2,500 vehicles daily.

As officials explained in June, the new Chinese rules led to major bottlenecks because of the way that most Kazakh truckers operate. Around 60 percent of them cross into China without wares in the hope of securing an ad hoc commission to carry goods back into Kazakhstan, but if they fail to do so within half a day, they have to return and get back into lines now rendered slow by coronavirus-related inspections.

Cross-border trade received another blow, however, on July 20, when Chinese authorities halted the passage of vehicles from Kazakhstan into its Xinjiang province because of a purported coronavirus outbreak there.

“At the same time, the Chinese side is proposing the loading of semi-trailers to be sent from China to Kazakhstan,” the Finance Ministry was cited as saying by Sputnik. This suggestion has prompted the intra-border handover fix.

Given the paucity of reliable information about the epidemiological situation in China – especially in Xinjiang, which exists in a climate of suffocating state repression – it is difficult to ascertain Beijing’s true motives with regard to its recent Kazakhstan border policies. Although it has cited a surge of coronavirus cases in Xinjiang, another possibility is that it may be seeking to implicitly rebuke Kazakhstan’s handling of its own outbreak.

When the first coronavirus cases were reported in March, Kazakhstan reacted by introducing a strict lockdown regime. Through to May 11, when the state of emergency was lifted, people were not permitted to leave their homes except for reasons of absolute necessity, such as to do grocery shopping.

That lockdown led to only a very modest flattening of the graph of new contagions, however, and its lifting accordingly precipitated a sharp intensification of the outbreak. As of July 23, the government had recorded 76,799 cases.

And there are strong suspicions that the real number of cases is much higher. One reason for the skepticism is fueled by official reluctance to pool pneumonia cases potentially caused by the coronavirus into the overall statistics. The testing regime has to a considerable extent collapsed, meaning that medical workers are often not able to ascertain whether pneumonia sufferers have developed their pathology because they contracted the coronavirus.

The level of uncertainty around this issue was such that the Chinese Embassy earlier this month adopted the unusually undiplomatic step of warning of the spread in Kazakhstan of a deadly “unknown pneumonia.” This deeply irritated Nur-Sultan, which was forced to fend off speculation that Kazakhstan was playing host to the appearance of a new, deadly and mystery sickness.

In a change of tack, the government has since said it will classify new pneumonia cases as coronavirus contagions, although that protocol is only being put in place from August 1 and will not be applied retrospectively.