She will stand before the same judge who recently found another activist guilty of insulting the ruling party. 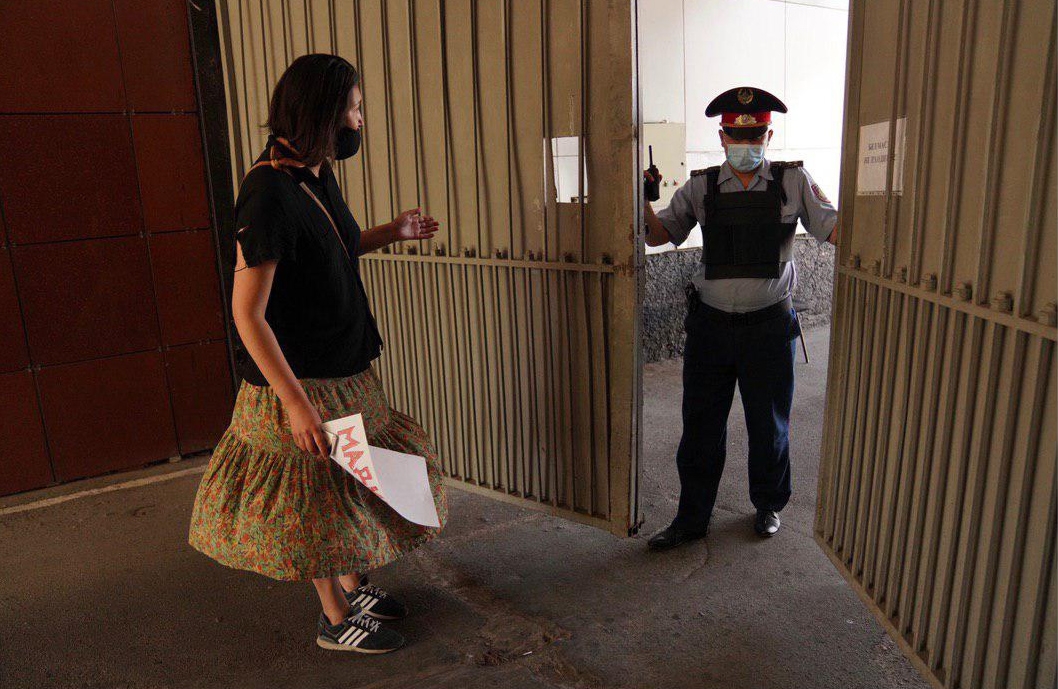 An activist in Kazakhstan is facing three years in prison for knocking the hat off a police officer during an unsanctioned protest last month.

Asya Tulesova was detained at a small June 6 anti-government rally in Almaty along with 52 others. After being held for several hours without access to a lawyer, she was released. But on June 8 she was arrested and charged with using force against the officer and insulting him. She has been held in pre-trial custody ever since.

Tulesova does not deny that she caused the officer’s hat to fall to the ground, as captured on video. She wrote on Facebook that her behavior was “an emotional burst” in response to the “inhuman, cruel and illegal police treatment of peaceful unarmed citizens who are not a danger to society, who had come to a peaceful rally to express their peaceful demands.” Just before the incident, another video shows her being manhandled and pushed to the ground by officers. Police were, she wrote, preventing “the exercise of our basic rights to freedom of assembly and freedom of speech.”

Human Rights Watch, Amnesty International, and local human rights organizations have called for her release. On social media, friends have organized a virtual demonstration, inviting supporters to a website to weave together a digital protest quilt. Almost 4,000 people have signed a petition demanding her release.

A well-known activist, Tulesova served 15 days last year for embarrassing the government by unfurling a banner reading “You cannot run from the truth” during a marathon in Almaty. That call for a fair presidential election, days after long-ruling Nursultan Nazarbayev retired, became a slogan for dissatisfied Kazakhstanis during a season of political transition.

In 2016, Tulesova started the air pollution monitoring initiative Almaty Urban Air. That same year, she attempted to run for local office in Almaty, but was expelled for declaring 0.78 tenge (a fraction of one U.S. cent) more in assets than her bank statements listed. Tulesova said the document she filled didn’t allow for the listing of assets in hundredths of a tenge, hence her decision to round. Government critics saw an obvious attempt to thwart her participation in the election.

Tulesova is the great-granddaughter of poet Ilyas Zhansugurov, who was executed by the Soviets in 1938 for political activity.

Activists are still waiting for reforms.

On June 22, Alnur Ilyashev was found guilty of “endangering public order” after he criticized the government’s response to the COVID-19 pandemic – he insulted the ruling party. He was sentenced to three years of non-custodial “restricted freedom” that includes monitoring of his movements, 300 hours of community service, and a five-year ban on political and civic activism.

Vlast.kz reported on June 30 that Tulesova’s trial, scheduled for July 7, will be held before the same judge who ruled against Ilyashev.