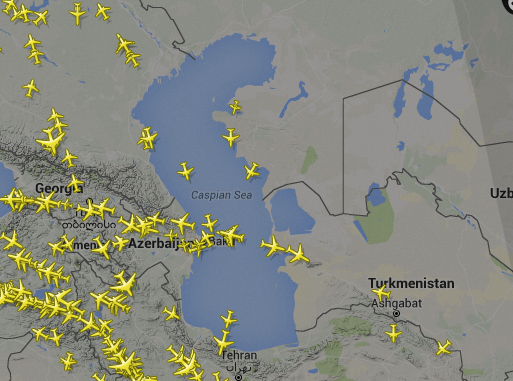 Kazakhstan's Air Astana and other airlines are altering their flight routes over the Caspian Sea after Russian missiles launches from the sea have created an unpredictable security situation.

Earlier this week, Hong Kong's Cathay Pacific announced that it was suspending flights over the Caspian. “In view of the situation in the region Cathay Pacific suspended all flights over Iran and Caspian Sea since last Thursday until further notice,” the airline said in a statement.

But the announcement by Air Astana, the flagship airline of a close Russian ally, is much more significant. The airline announced Friday that it was changing the route of its Almaty-Baku route. "We are now flying by a more northerly route, in the area of Aktau," said company spokesman Tlek Abdrakhimov, local media reported. The route change would add 15 minutes to the flight time. Flights to Tbilisi and Istanbul could be similarly affected, the company said. The rerouting via Aktau suggests that Kazakhstan doesn't see the entire Caspian as a risk, but only the southern part.

On October 9, the European Aviation Safety Agency issued a safety bulletin alerting airlines that there had been "several launches of missiles from warships, located in the Caspian Sea, to Syria on 06 and 07 October 2015. Before reaching Syria, such missiles are necessarily crossing the airspace above Caspian Sea, Iran and Iraq, below flight routes which are used by commercial transport aeroplanes." The agency did not issue a specific recommendation to avoid the sea, however.

In a television interview on October 10, Russian President Vladimir Putin was asked about the missile launch, and he suggested that Russia didn't prioritize communicating information with other states:

Vladimir Solovyov: What happened on October 7 made a big impression of course, including on the military experts: no one was expecting that the Caspian flotilla would launch strikes, with missiles crossing two countries to hit targets in a third. Had American intelligence stopped working?

Plenty more airlines continue to fly over the Caspian. A check to flightradar24, an online flight monitoring website, on Friday afternoon Caspian time showed that aircraft from airlines including Swiss Air, Qatar Airways, and Singapore Airlines were using air routes over the Caspian. A Turkmenistan Airlines and a non-commercial jet identified as being operated by the Azerbaijani government also were spotted over the sea, suggesting that other Caspian states don't see the situation as Kazakhstan does.

As it happened, several heads of state of the former Soviet Union, including Russian President Vladimir Putin, met Friday in Kazakhstan. No doubt this came up in conversation.