Lake Balkhash is fed by the Ili River that originates over the border in China’s Xinjiang region. 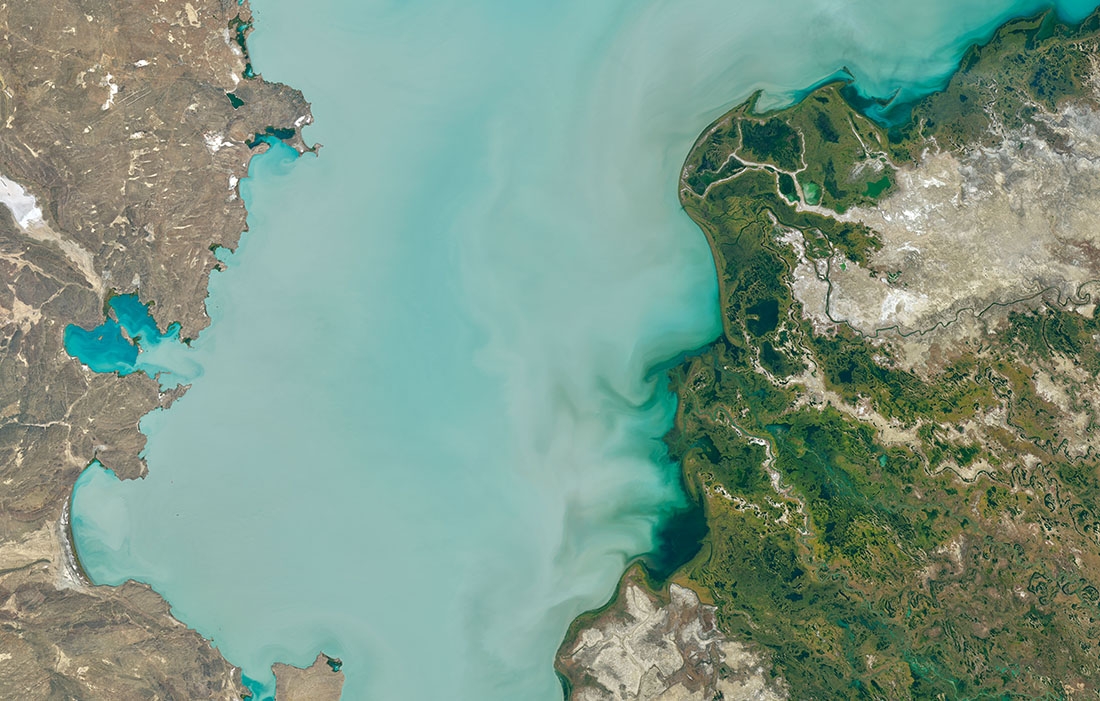 The southwestern part of Lake Balkhash in 2017 (NASA)

President Kassym-Jomart Tokayev of Kazakhstan has raised concern over the future of his country’s largest lake, while declining to mention that its fate mostly depends on Chinese activities upstream.

Tokayev spoke about the shrinking Lake Balkhash during a visit to the Karaganda region that appeared closely tied to a snap presidential vote next month.

In recent years, “there has been a rapid shallowing of Lake Balkhash,” he complained, while referring to the “unsatisfactory technical condition” of the Satpayev canal that transports water into the country’s central regions from the Chinese border.

Tokayev asked officials at the October 5 gathering to study the problem and take measures accordingly.

Water transportation is a perennial source of vexation in Central Asia, where dated infrastructure has made it one of the world’s most water-wasting regions. Just witness the disappearance of the Aral Sea, which Kazakhstan shared with Uzbekistan.

The biggest issue facing Balkhash is increased demand for water along Chinese sections of the Ili River, which accounts for 70 percent of flows into the lake.

Here the ball is very much in China’s court.

Two years ago Kazakhstan’s then-ecology minister described ongoing negotiations for an agreement on trans-boundary water resources as “very difficult,” while expressing pride that Kazakhstan was the only country of all China’s neighbors that Beijing was even bothering to consult over water issues.

As of April last year, work on the agreement that began in 2015 was 25 percent complete, the ministry estimated.

That summer, recently dismissed deputy ecology minister Serik Kozhaniyazov argued that the lake was not actually losing volume, and would remain stable as long as 12 cubic kilometers flowed into it every year.

A study back in 2018 by Kazakh academics framed negotiations over common use of the Ili and another river flowing in from China, the Irtysh, as a "casualty of Kazakhstan-China relations.”

The authors argued that Astana was “trying to balance access to adequate water with all the other aspects of its national interest that are connected to its relationships with China.”

Given the fate of the Aral Sea and the impact that disaster had on weather in the surrounding region, the stakes are high.

But Kazakhstan’s broader diplomatic dependence on Beijing has only grown since Russia’s invasion of Ukraine, which has strained Moscow-Astana relations.

Ecology and industry were key themes of Tokayev’s visits to Karaganda and then Pavlodar.

While admitting in Pavlodar that Kazakhstan was not ready to move away from the coal-heated power stations that make up 70 percent of the national energy mix, the president said that their modernization to improve output and reduce emissions was a must.

In Karaganda he reiterated criticism of worker safety at ArcelorMittal Temirtau, the country’s largest steelworks, which recently promised to invest $1 billion in its own modernization.

Karaganda city, as “the industrial locomotive of the country, one of the scientific, educational and cultural centers of Kazakhstan, should become more comfortable for living,” Tokayev added, calling on “urbanists” to assist in the overhaul of the 15-year-old city plan.

“The era of oligarchic capitalism in Kazakhstan is coming to an end,” he promised his enthused audience. “A period is coming of social responsibility before citizens.”