Where the government has been slow to acknowledge the crisis, volunteers are stepping in. 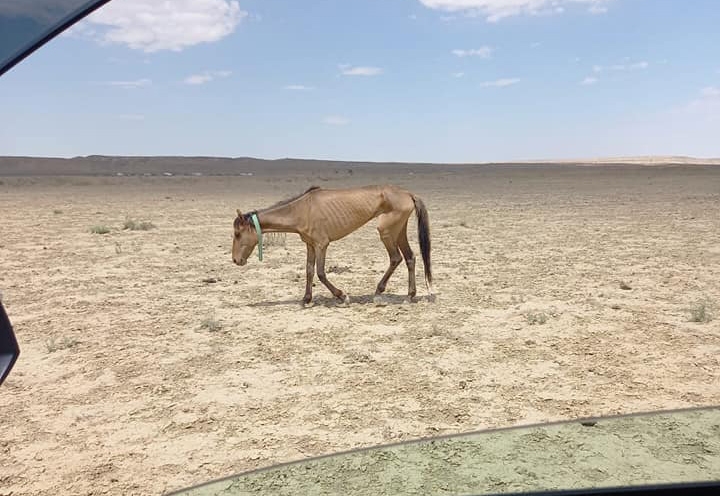 The months-long drought gripping Central Asia has turned into catastrophe for herders in western Kazakhstan. Without grass or fodder, thousands of cows and horses are starving to death. The government has been slow to acknowledge the crisis, though officials are beginning to act after months of pleas for help on social media.

Back in late May, activist Berdimurat Torekenov in the western Mangystau region took to Facebook to ask authorities to declare a state of emergency and organize feed deliveries to suffering farmers. His photos of emaciated horses searching for water and grass on the desiccated steppe were widely circulated by Kazakh media. Herders usually rely on lush summer pastures and hay they harvest in the fall, but little is growing this year after a dry winter and spring.

“There is no time to think, only to act. The government should declare a state of emergency and I ask every citizen to give a hand to local farmers suffering from drought,” Torekenov wrote on May 27. He added that a majority of drought-affected herders in Mangystau are smallholders; their only source of income is their dying livestock.

Shortly after the president sacked his agriculture minister, authorities declared a state of emergency on July 14 in the Aral district of Kyzylorda region, acknowledging that low rainfall had left 90 percent of pastureland unable to support life.

But Almasbek Sadyrbaev, chairman of the National Association of Animal Breeders, believes the government is downplaying the scope of the die-off.

“The government is not aware of the real scale of the tragedy. According to official figures, 500 cattle died in Aral district of Kyzylorda. But in only one village there, I counted 500 dead cattle,” Sadyrbaev told news site 365info.kz on July 12.

If officials are purposely downplaying the numbers, as Sadyrbaev suggested, it may be for fear of incurring more expenses on top of the government’s costly pandemic response, which doubled Nur-Sultan’s budget deficit last year.

Acting Agriculture Minister Yerbol Karashukeev visited Mangystau on July 15 and told local farmers that the government plans to spend 1.9 billion tenge (about $4.5 million) to lower the price of hay and fodder by 17 percent; he also promised to organize transportation of feed to suffering regions. The money has not yet been disbursed.

Instead, the only aid so far has been delivered by volunteers.

A group from Turkestan region organized a freight train wagon filled with hay to be distributed for free in Mangistau. It was delivered on July 14 and distributed to local farmers.

Feed prices are rising rapidly. Azamat Sarsenbayev, a popular Instagrammer from Mangistau, wrote on July 16 that the local markets are in “complete chaos.” Some of what’s available, he said, is little more than twigs.

“Farmers are desperately selling their emaciated livestock, as the price for feed has been increasing every day. But, as the drought is expanding into other regions, the number of buyers has decreased dramatically,” Sarsenbayev noted, adding that farmers had never seen such a die-off.

Officials should have expected the food scarcity, he said, adding that local farmers also must change their ways, that many have more animals than the land can support.

Scientific consensus on climate change holds that Central Asia will experience increasingly extreme weather, such as droughts, along with a general warming that will reduce levels in glacier-fed rivers. A new paper by scientists at the China Meteorological Administration finds arid western Kazakhstan will see more rain in the decades ahead.

That’s not soon enough for the herds in Mangystau and Kyzylorda, however. Forecasters at Kazhydromet see no respite on the horizon.