Many Kazakhs are horrified by Moscow’s war in Ukraine, taking to social media with calls to distance their country from its closest partner. 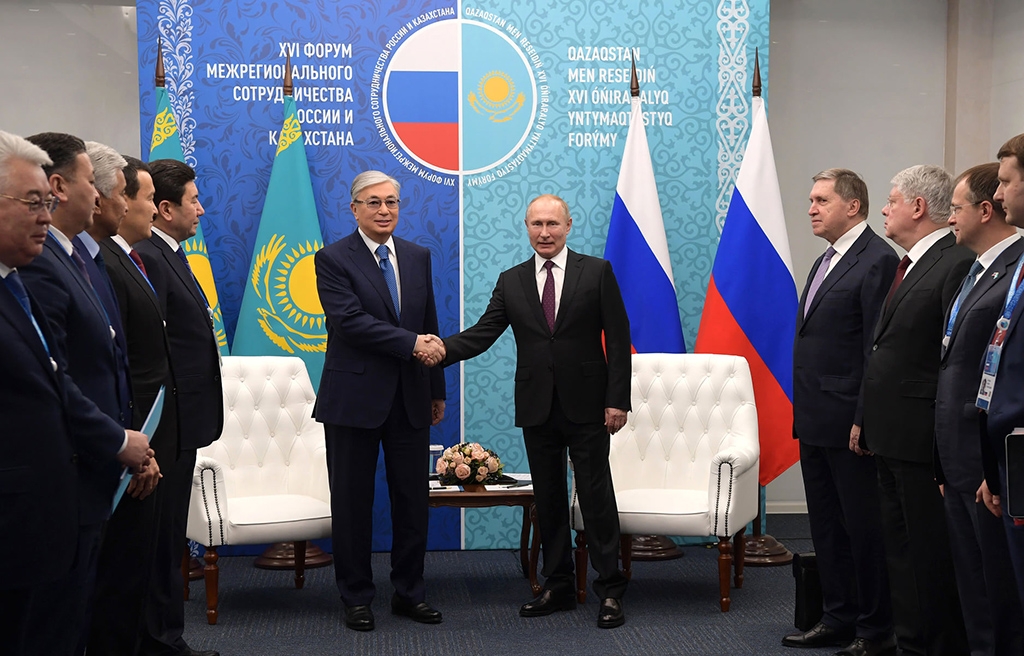 How much is this going to hurt? (Kazakh presidential administration)

The future of Kazakhstan’s relationship with its closest ally, Russia, is on the minds of many Kazakhs – and their Facebook pages – these days.

Watching Russia’s indiscriminate attack on Ukraine, Kazakhs are asking: Will we be next? How much will our economic ties with Russia hurt us? Will we too be punished by Western sanctions for belonging to the Moscow-led Eurasian Economic Union, the EAEU? Others argue in support of Russia, some even marking their cars with the letter “Z”, the symbol invading Russian troops have painted on their armored vehicles.

Facebook is where Kazakhs go to discuss and argue the issues of the day. A new petition circulating there demands the Kazakh government cut its ties, or at least leave the EAEU and the Moscow-led Collective Security Treaty Organization, a military bloc.

That’s unlikely to happen. Kazakhstan’s leaders are expert at the tightrope. On the one hand, they avoid angering the prickly former colonial power, which sits across the second-longest land border in the world. They also try to show the world that they will not back Russia’s aggression. When President Kassym-Jomart Tokayev spoke with Vladimir Putin on March 3, he made sure to speak with Ukrainian leader Volodymyr Zelenskiy as well. The day before, Kazakhstan abstained from a UN General Assembly vote demanding Russia stop bombing Ukraine. It even allowed a small protest in Almaty over the weekend.

Anecdotal reports suggest the government is seeking to lower the temperature, turning loose its spin doctors to tame the outpouring on Facebook. And on March 9, the lower house of parliament approved a bill that, while ostensibly claiming to protect children, would further the Information Ministry’s control over independent social media platforms, Vlast.kz reported.

Margulan Akan is an editor at Almaty-based media outlet Bugin Media known for his sharp, influential posts on various topics in the Kazakh language.

On March 4, Akan told Eurasianet, a government acquaintance approached him with a very specific request.

“He asked me to write a short [Facebook post] in support of Kazakhstan remaining a member of the EAEU,” Akan said. “I declined immediately.”

“Suddenly, several employees of the Kazakhstan Institute of Social Development started to write and share posts with pro-government rhetoric,” he said, referencing a think tank run by the Information Ministry.

Akan took screenshots and shared some of the posts on his own Telegram page. Several begin with the same phrase: “Since EAEU membership is under discussion…” and include verbatim lines: “it’s not going to be peaceful”; “even we leave the Union, we will still be neighbors with Russia”; “Russia won’t forgive us.”

Bella Orynbetova, an Almaty-based activist and former journalist with pro-government outlets, told Eurasianet that government affiliates pay, on average, 50,000 tenge (now around $98) per social media post. Once an influencer accepts a payment, “they can’t quit even they want to.”

Authoritarians in Kazakhstan’s neighborhood all try to control messaging to one degree or another. Across the Caspian in Azerbaijan, Eurasianet has reported, the government sends journalists daily WhatsApp messages with orders on exactly what to say, even whether it is okay to laugh at a wooden joke made by an ally.

Nur-Sultan has not gone that far, yet. But the attention from above is likely to grow, says Orynbetova, who described cases of pro-government trolls blackmailing activists who go too far.

She expects anyone loudly questioning the relationship with Moscow to face a similar fate.