Our Kazakhstan correspondent describes the waiting, the bureaucracy, and the anticlimax of getting his Sputnik V jab in Almaty. 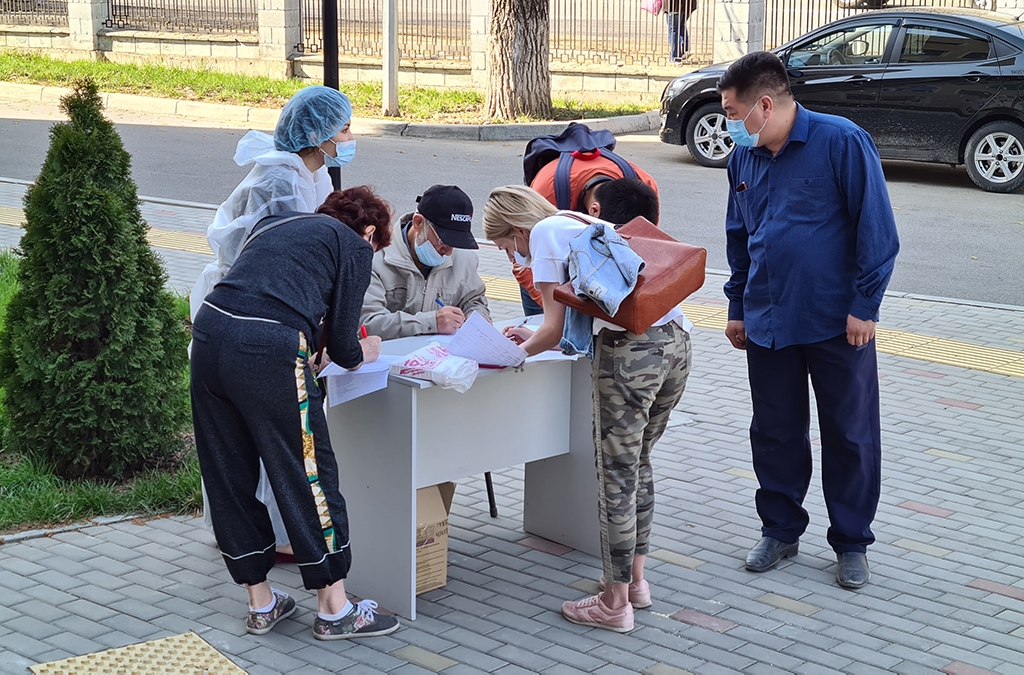 Despite the online registration and appointment system, patients had to fill out application forms at check-in. (Almaz Kumenov)

It takes the president to get mad in Kazakhstan for things to start moving.

So I guess there’s Kassym-Jomart Tokayev to thank for the SMS that pinged onto my phone a couple weeks back telling me that it was my turn for a COVID-19 vaccination.

The message was simple and read almost like one of those spam messages about lottery winnings: “Dear KUMENOV ALMAZ! You have been invited for a vaccination from ‘Coronavirus infection’ on 13.04.2021 at 0915 hours in City Polyclinic No. 6 in the city of Almaty.”

The mass vaccination drive had before then been a bit of a mess.

When the government announced the start to their jab campaign on February 1, using the Russian-made Sputnik V vaccine, they told the public that key workers would be the first in line: doctors, law enforcement officers and teachers.

Nobody complained. That seemed sensible. In fact, if anything, there wasn’t much rush. Rumors and disinformation about the vaccine were spreading like wildfire. Many insisted they wouldn’t touch Sputnik V.

But then the wait started feeling too long. In early March, health authorities, who have been devils for undercounting throughout the crisis, were reporting the number of daily new cases in the 600-700 range. By the end of the month, it was well over double that number, and only around 137,000 people – out of a population of 19 million – had received their first dose of Sputnik V.

The situation got bad enough that Tokayev on April 1 publicly berated Health Minister Alexei Tsoi in no uncertain terms.

“You must turn the tide, otherwise a personnel decision that is going to be very disappointing for you will follow,” Tokayev said. “And this applies not only to the health minister, but to the government as a whole too.”

The effect was instantaneous. By April 2, vaccination points had popped up in shopping centers, markets and the notorious TSON offices where the public goes to deal with government bureaucracy.

It was zero to sixty in the bat of an eyelid. So much so that even city hall in Almaty seemed caught by surprise. Almaty’s top doctor Zhandarbek Bekshin had been warning in late March that people should expect “no mass vaccination in the near future.” And the mayor was fretfully telling people that polyclinics were not yet prepared to administer the injections, even as they were happening all around him.

Where social media was earlier buzzing with crackpot conspiracy theories, it was now all photos of vaccination pioneers talking about their experiences and speaking in complimentary terms about how many volunteers were involved in the whole exercise.

Even Tokayev got the jab, despite having insisted earlier that he was going to wait until the domestically developed QazVac (QazCovid-in) jab was ready to go. As his spokesman explained, Sputnik V is being produced under license at a plant in Karaganda, a city in the center of the country, so it’s not like the president was being unpatriotic.

Suddenly, people were sharing photos showing how too many members of the public were getting their jab. The crowds could pose an epidemiological risk, they cautioned.

That was when the authorities changed tack. From April 7, instead of allowing those desiring vaccination to just turn up, they would require them to sign up with their local doctor or through the online e-government portal and wait for an appointment. The latter was the option pursued by this Eurasianet correspondent.

It was wonderful to get that message. I thought I would quickly get my injection and carry on with my day’s business.

When I turned up at the city polyclinic, I was greeted by the long line we had been assured this whole system was designed to avoid. A nurse at a little table was instructing waiting people on how to fill out their application forms correctly.

But I am here by appointment, I told her.

“Everybody is here by appointment. Take your place and wait,” the nurse replied. Everybody who arrived after me got the same line.

“Why aren’t you letting in people at their appointed time?” blustered Murat, a 40-something man waiting in line. “What was the point of getting an appointment if we were going to have to wait in line anyway?”

“Too many people,” was the laconic response.

The vaccinations should have started ages ago, grumbled Murat, not now that “everything is on fire.”

It took Tokayev blowing his top for it to happen, mused Murat: “If you don't kick them [officials], nobody will move.”

As for all these rumors about the vaccination being a cover to plant chips in the public, “complete nonsense,” said Murat, adding that he had total trust in Sputnik V. Chinese vaccines, though, that’s another story.

“There are good scientists in Russia, and anyway, I haven’t heard of anybody dying from getting Sputnik,” he said. “But I would definitely not take the Chinese injection. I just don’t trust them.” (Neither of the Chinese vaccines is authorized in Kazakhstan, though the government has said it would take 3 million doses of the Sinovac-produced jab.)

The line moved five people at a time. That is the number of vials in a single package of Sputnik V. The vaccine has to be used quickly in normal room temperatures or it can spoil.

When my cluster’s turn arrived, we all shuffled up to the third floor, received a brief examination to test for blood pressure and oxygen saturation and were asked if we had at some point contracted COVID-19. Meanwhile, the polyclinic’s regular clients were milling about, knocking doors and waiting in lines, as if it were an ordinary day.

The whole procedure took no more than a handful of minutes.

“Sit down. Take off your shirt.” Jab. A very slight sting in the upper left arm. And that’s all.

“We try to do everything quickly,” explained the nurse administering the injection. “We work from 8 a.m. to 8 p.m. In fact, we were told that the standard should be 60 people daily, but in fact we accept many more.”

After getting the vaccination, the nurse instructed me to wait in the hallway for 20 minutes, to make sure I had no reaction. But I left after 10, because more people were filing in and had nowhere to sit.

Personally, I felt no side-effects, although I did see some people on social media saying that they were suffering headaches or joint pains.

Later that evening, another SMS arrived with another invitation. Same clinic, three weeks from then, at exactly 0915 hours.

The Health Ministry is really going full throttle. In January, they were forecasting vaccinating up to six million citizens by the year’s end. Now, the target is to give injections to two million people every month. At that rate, we could be looking at herd immunity by September.

That might be a little overambitious. As of April 22, around 800,000 people had got their first dose.

Maybe Tokayev will need to have another tantrum.