These claims are casting fresh doubt over viability of EAEU 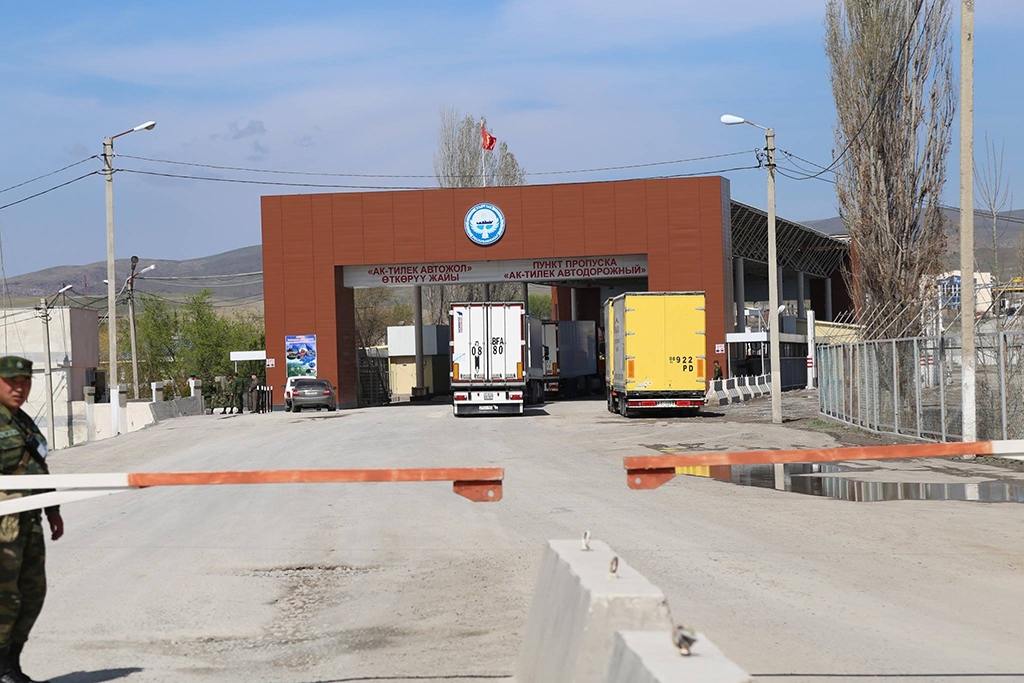 Oh border where are thou?: The Kyrgyz-Kazakh frontier has been a source of woe for years. (Photo: Kyrgyzstan Agriculture Ministry)

In the latest evidence of ill-feeling among members of a Russia-led trading bloc, Kazakhstan has leveled accusations at neighboring Kyrgyzstan of fiddling customs figures and abetting the proliferation of largescale smugggling.

Kazakhstan’s Finance Ministry said in a detailed statement on June 8 that it was basing its allegations on data collected over an 18-month period. Over that time, Kyrgyzstan officially declared only one-tenth of the real value of goods being sent into Kazakhstan, costing huge losses to Kazakh coffers, the ministry said.

Over a nine-month period in 2019, Kyrgyzstan declared it had exported 18 billion Kazakh tenge (around $45 million) of goods to Kazakhstan. And yet Kazakhstan’s official data showed that it had imported 186 billion tenge of goods over that timeframe, the Finance Ministry said.

While charges of shady business will sow fresh discord among the neighbors and once again test the credibility of the Eurasian Economic Union, or EAEU, as a viable entity, they are grist to the mill of Kyrgyz activists decrying chronic corruption in their government.

The schemes, as outlined by Kazakhstan’s Finance Ministry, are simple. Goods are smuggled into Kyrgyzstan from China – likely with the connivance of Kyrgyz customs officials, although Nur-Sultan does not spell that out – thereby depriving the EAEU of customs revenue that should be shared among bloc members.

In addition to underestimating volumes, the value of those same items is being rigged to avoid payment of tariffs.

“The price of goods produced in China as shown on the waybills are significantly lower than those goods cost in our country – up to a factor of 400. This means that the coffers of Kazakhstan and partner countries are being deprived of tax revenues,” the Finance Ministry said.

Huge lines of freight trucks periodically form at checkpoints between the two countries, invariably as a result of Kazakh customs service officials intensifying inspections. This causes deep frustration among Kyrgyz exporters whose drivers are as a result left stranded for days at a time. Officials in Bishkek likewise harrumph that the sticky border crossings make nonsense of the EAEU being a space for the free movement of goods. The latest border logjam has prompted threats from Kyrgyz lawmakers to cease considering EAEU business until the impasse is resolved.

But Nur-Sultan contends that even greater amounts of non-permitted goods would filter into the country unless the tight control regime is maintained.

Over the period studied by the Finance Ministry, around 80,000 vehicles carrying imported goods crossed the border. Kazakh customs services say they detected thousands of instances of smuggling.

On 2,300 occasions, Kyrgyz freighters tried to smuggle in banned or restricted goods, including oil products, medical items, timber and scrap, Kazakh officials said. Some of the informal trading of fuel goes the other direction, though. Gasoline in Kazakhstan is considerably cheaper, so there is a cottage industry in lone operators buying large containers of fuel in near-border gas stations for resale in Kyrgyzstan.

In 2,600 cases, the Kazakh Finance Ministry said, the recorded recipient of the goods was either fictitious, bankrupt or not actually involved in the import deal. The purpose of such fraud is to enable the delivery of the items to a destination other than the one listed on the waybill.

This is not the first time that Kazakhstan has openly slammed its neighbor over the seemingly unchecked smuggling racket. Previous protestations have fallen on deaf ears, however.

“Kazakhstan’s tax authorities have been conducting an online exchange of preliminary information about export declarations with Uzbekistan. From this year we are doing the same with China. Work is also under way with other countries. Proposals for cooperation were also sent to the Kyrgyz government, but our requests to address this matter have gone unanswered,” the Finance Ministry said.

The most recent bout of neighborly ill-feeling came in 2017, when Kazakhstan’s then-Prime Minister Bakytzhan Sagintayev sought to show the scale of the problem with customs data, as the Finance Ministry has done this week.

This sort of statement has only fueled suspicions inside Kyrgyzstan about the existence of a colossal corruption scheme at the customs service.

A coalition of news outlets – consisting of the Organized Crime and Corruption Reporting Project, or OCCRP, RFE/RL’s Kyrgyz service, Radio Azattyk, and news website Kloop – last year published an in-depth investigation that sought to document what they described as a vast smuggling and money-laundering operation. The report shed new light on the ways in which customs service officials have allegedly turned a blind eye as multibillion-dollar smuggling operations have defrauded the Kyrgyz state of vast amounts of revenue.

That report triggered an upswell of indignation that culminated in demonstrations in the center of the capital, Bishkek. Despite grumblings of public discontent, however, the authorities have shown little interest in pursuing the accusations.

They do not appear intent on acting on Kazakhstan’s accusations either. Eurasianet’s attempts to get an official comment on the Finance Ministry’s claims were rebuffed.