Zhanar Sekerbayeva said she was trying to smash the taboo about menstruation. 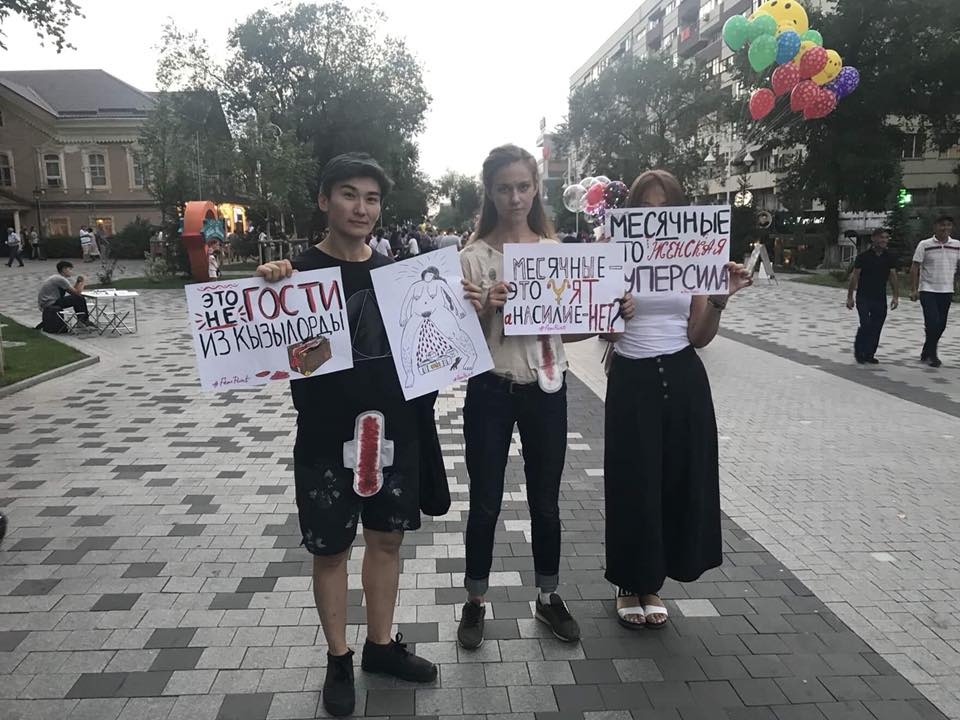 A court in Kazakhstan’s business capital has fined an activist after she held a picket to promote greater public sensitivity toward menstruation — a taboo issue in this often-conservative nation.

Zhanar Sekerbayeva wrote on her Facebook account on August 20 that she was fined 12,000 tenge ($33) on petty hooliganism charges for the demonstration, which involved a small group of people holding up signs with slogans like: “Periods are shameful and violence isn’t?”

The original picket took place on a popular pedestrian street in Almaty on August 9. Sekerbayeva and her colleagues were detained by police several days later.

Sekerbayeva, who describes herself as an “LGBT activist and open lesbian,” says the aim was to lift the veil of embarrassment from a commonplace phenomenon.

“The aim of the demonstration was to touch on some aspects of sex education, namely to explain that menstruation is not matter for shame, because it is a natural physiological process," her activist group, Feminita, wrote in a statement on Facebook.

The police hold another view, deeming the picket a disruption of public order.

Amnesty International condemned Sekerbayeva’s detention as a case of intolerance from the authorities toward “any views which they do not endorse.”

“Rather than addressing the human rights concerns raised by these activists and seeking ways to break down the harmful stigma surrounding menstruation in Kazakhstan, the authorities have opted to shut down the discussion which Zhanar Sekerbayeva so bravely opened up.” Heather McGill, researcher for Eastern Europe and Central Asia at Amnesty International, said in a statement.

The immediate public reaction to the stunt, however, suggests the authorities were taking the path of least resistance by succumbing to prevailing conservative views.

“Some guys turned up who expressed themselves aggressively and with obscene words,” Feminita wrote in its write-up of the event. “One of the men grabbed a poster out of the hands of a feminist and began to shout loudly. Another followed a journalist who was photographing the [picket].”

In the teeth of modernization elsewhere in society, there has been a burgeoning trend in Kazakhstan toward publicly shaming people — almost always women — perceived to be violating traditional values. The word uyat (shame) is deployed to cow offenders into submission.

“Is somebody here having their rights infringed because of menstruation?” wrote one.

Another — a woman, judging from the verbal form — remarked: “I would have torn up the poster too.”

Correction: A previous version this article stated incorrectly that Sekerbayeva was detained immediately after the picket.