Serikzhan Bilash was flown to the capital following his arrest. 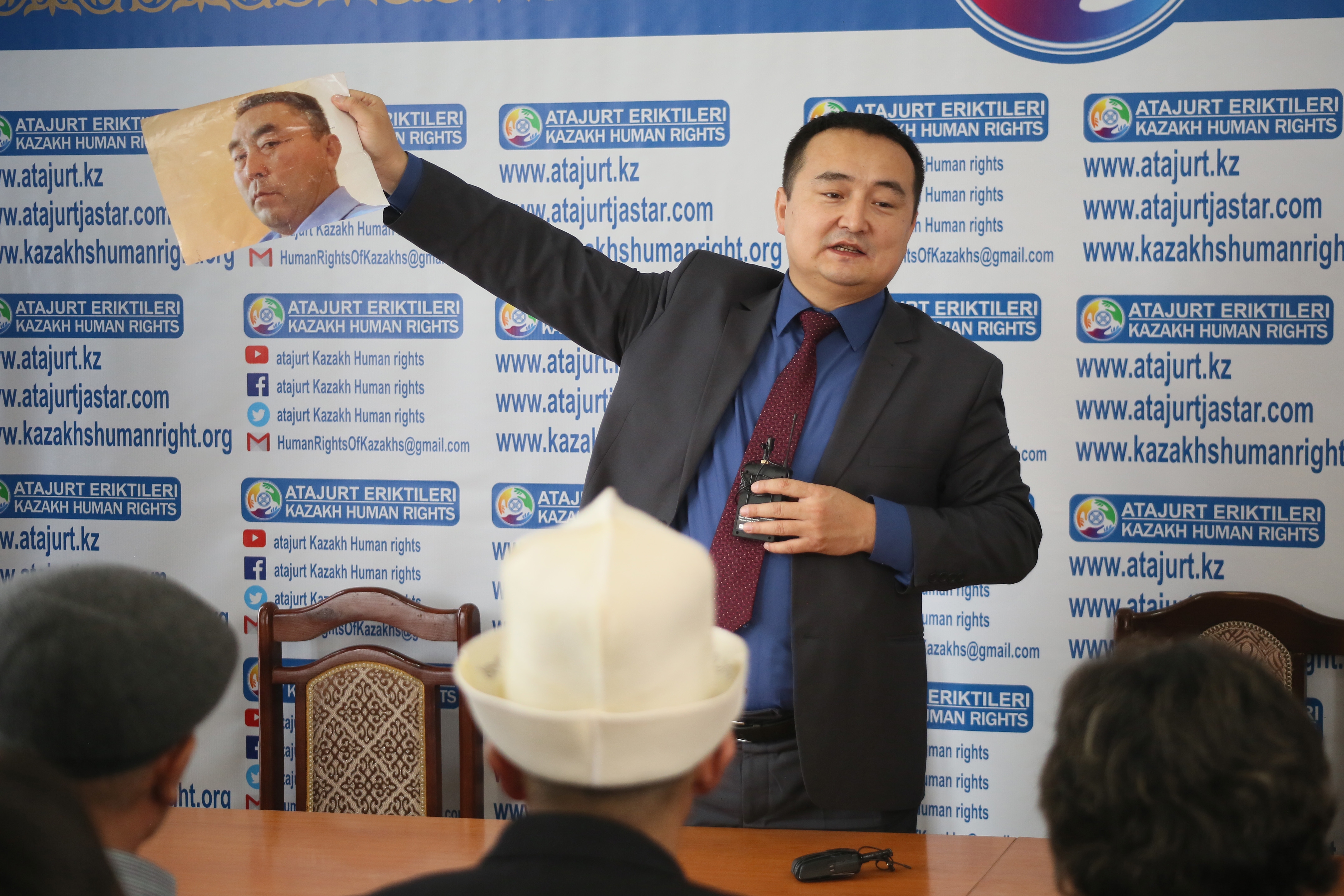 Serikzhan Bilash seen holding an image of a man interned in a camp in China. (Photo: Eurasianet)

An activist in Kazakhstan who has led the charge in raising international awareness about the plight of ethnic Kazakhs interned in camps in western China has been arrested, people familiar with the situation have told Eurasianet.

Serikzhan Bilash, head of the unregistered Ata-Jurt movement, was taken away from the hotel room where he was staying in the city of Almaty early in the morning of March 10, his wife, Leila Adilzhan, told Eurasianet.

“My husband rang me after about 9 am on Sunday to say he was arrested by police and taken by plane to Astana. If he has been taken by plane, I think it is very serious,” Adilzhan said.

In a video filmed and distributed through messengers later in the day, Bilash said he was being charged with inciting hatred.

Bilash's detention was also confirmed by Ata-Jurt representatives in Almaty. His colleagues alleged in a video message uploaded to the internet to have found traces of blood on the floor of the hotel room where Bilash was staying temporarily as a security measure.

The group's office in Almaty was searched on March 10, one volunteer told Eurasianet.

The veracity of claims made in the video could not be immediately verified.

Bilash and Ata-Jurt’s no-holds-barred brand of activism has served as the cornerstone for much of the foreign media reporting on the rights crisis in China’s region of Xinjiang. Many of the video testimonies recorded in the group’s office have helped shed light on the reeducation camps that began springing up across that region in 2017.

For Kazakhstan’s government, a trustworthy ally to Beijing, this publicity campaign has posed a dilemma.

Astana has come under significant public pressure to raise the issue of the detention of ethnic Kazakhs and nationals of Kazakhstan with Beijing. The Foreign Ministry recently claimed credit for the release of 23 Kazakh passport holders.

Bilash and his Ata-Jurt colleagues claimed in another video account posted online that a group of unidentified men barged into their Almaty premises on the evening of March 9. Ata-Jurt say that they reported this incident to the police.

Pressure has been increasing on Bilash, who was fined the equivalent of $670 dollars last month for leading an “unregistered organization”.

His argument that he was merely an administrator of social media and messenger accounts associated with the group did not wash with the court. Bilash has always said that Ata-Jurt is run wholly by volunteers.

Bilash has been questioned by authorities in Almaty on numerous occasions. The most recent such interrogation followed the publication of a public letter featuring criticism of his activities by a group of well-known public figures.

The authors of the letter claimed Bilash’s rhetoric was sowing divisions among the community of foreign-born, naturalized Kazakh citizens known as Oralman. They also accused him of inciting hatred, ostensibly toward the Chinese. Issues relating to Xinjiang should be the preserve of bilateral negotiations, they said.

This article was updated to clarify the circumstances of an alleged incident at the Ata-Jurt offices on March 9.