Tulesova had spent two months in jail pending the trial. 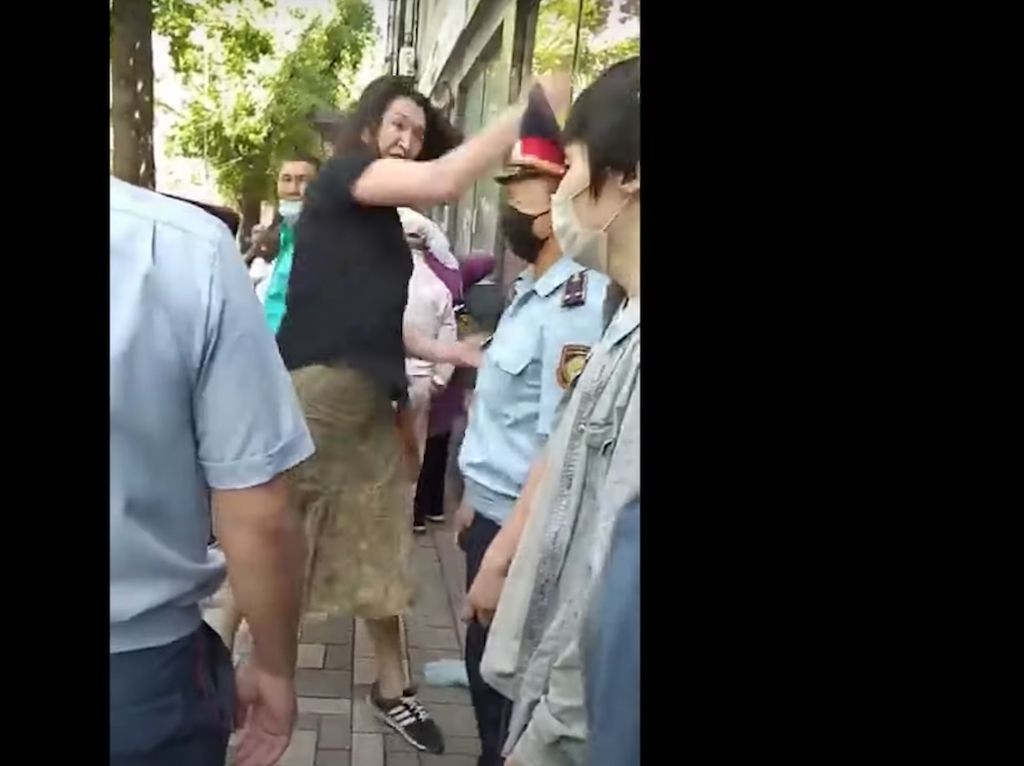 Hats off: The moment that landed Tulesova in jail.

A court in Kazakhstan has sentenced a prominent activist to 18 months of limited freedom for insulting and using violence toward a police officer in a case that has illustrated how the government appears intent on maintaining its zero-tolerance stance on political rallies.

The August 12 ruling handed down by the Almaty court meant the 35-year-old Asya Tulesova was able to walk free from jail, where she spent over two months after being detained for knocking off a policeman’s cap at a June 6 rally. She will be unable to leave Kazakhstan for the duration of her sentence, however, and must pay a fine worth $130.

Better known as an environmentalist in her home city, Tulesova achieved prominence last year for staging a protest during an Almaty marathon in the buildup to the presidential election. Together with fellow activist Beibarys Tolymbekov, she held up a banner with the words “You Can’t Run From the Truth,” which became something of a recurring slogan for advocates for democratic reform.

That stunt earned the pair two weeks in detention – a punishment that sent waves of indignation through civil society.

Tulesova’s more recent run-in with the law may have garnered less attention, but it has nonetheless highlighted chronic problems with Kazakhstan’s justice system, which have grown only more evident as the authorities have fumbled in coping with the implications of the COVID-19 outbreak.

One court hearing, conducted via video conferencing software, on August 5 was notable.

In an attempt to establish whether Tulesova had verbally insulted the policemen on duty at the June rally, the prosecutor dwelled for some time on her reference to them as “awful cops.”

He asked Tulesova whether her parents would approve of her using the word “cops.” When Tulesova responded that it was widely used in her social circle, the prosecutor noted that he had acquaintances in the police force that would find the term offensive.

The judge, meanwhile, showered almost everyone involved in the trial with contempt, including the policemen.

Nurbek Temirkhanov, the police officer whose hat Tulesova admitted to knocking off, struggled to keep his story straight when he was cross-questioned by the defense, as he described the “physical pain” he had felt when Tulesova knocked off his hat.

“So, you gave yourself a promotion just now?” the judge asked after Temirkhanov incorrectly described his job title.

Tulesova’s lawyer, Jokhar Utebekov, asked Temirkhanov why he repeatedly muted his microphone and glanced upwards, away from the camera.

“I have a feeling someone is in that room, telling you what to say,” the lawyer complained.

Temirkhanov denied that this was the case.

Tulesova was largely unrepentant throughout the trial, acknowledging only that she had failed to restrain herself after she witnessed aggressive police behavior toward protesters, who included a number of elderly citizens.

Speaking after she was released from jail, Tulesova thanked supporters who had regularly turned up outside the court and the large audience that had followed the hearings online.

The trial had played a useful civic role, she said, because “many people did not have an understanding of how our system was organized: how law enforcement agencies work, how investigators work, how the courts themselves work.”

Tulesova is not a journalist, but when present at rallies she has straddled the roles of advocate and political activist inasmuch as she includes among her responsibilities documenting the often-rough detentions that occur during such events.

Formal and informal rules on public assembly are weak in recognizing such fine distinctions. Tulesova’s case came on the heel of the drafting of new rules for journalists covering rallies that appeared primarily designed for the convenience of the police rather than reporters.

One proposed rule applicable to larger rallies stipulates that journalists can request a cordoned-off “press area” to be installed in the vicinity of the rally. While officials have stressed that journalists will be free to work outside these zones, some have already expressed concern that police might use them to arbitrarily enforce distance between the media and protesters.