The impetus to keep hammering away at the international film market has come from President Nursultan Nazarbayev. 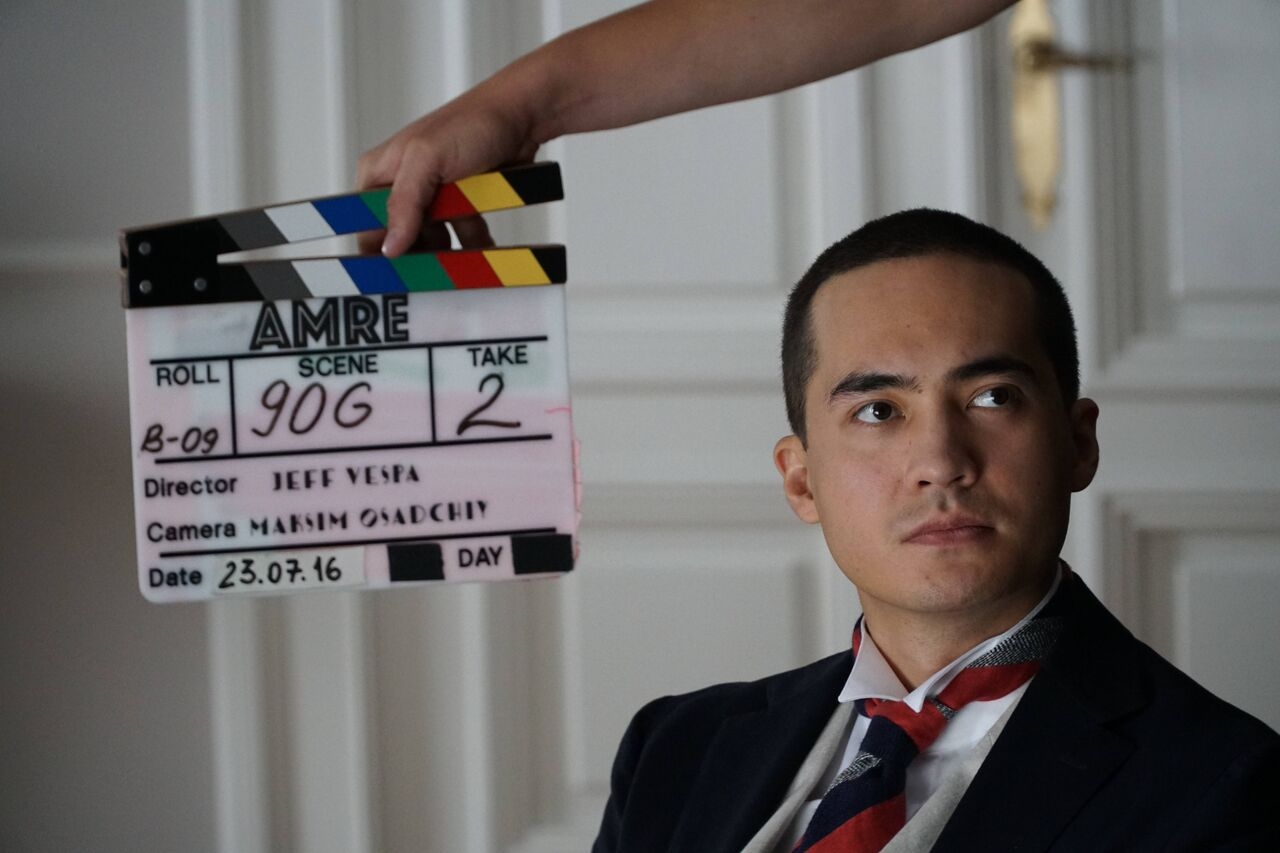 Mondays are not normally a busy day for cinemas, but at least one screen at the Kinopark 8 complex in Almaty was packed at the start of last week.

One of the ticket ushers, a young woman called Madina, said the main movie on show that evening, a patriotically themed Kazakhstan-produced biopic called Amre, has proven quite the hit, especially among young people.

The plot pivots around a heavily fictionalized episode from the life of a celebrated Kazakh musician, Amre Kashaubayev. In 1925, Kashaubayev traveled with an official delegation, of what was then the Soviet Union, to sing and play the national Kazakh instrument, the dombra, before audiences at an international Expo in Paris. As depicted in the movie – which IMDB, the Internet Movie Database, lists under the international title Paris Song – the performance was a roaring success and Kashaubayev won a silver medal for his efforts.

The drama arises from politics of the time. While in Paris, Kashaubayev encounters Kazakh writer and activist Mustafa Shokay, who opposed the Soviet regime from exile. The meeting draws the suspicion of Kashaubayev’s minders, who then try to intimidate him into double-crossing Shokay.

Amre bears a strong imprimatur of official sanction. It was filmed on an order from the Culture and Sports Ministry and co-produced by Kazakhfilm and DAR Play, which is owned by the son of banking and metals tycoon Bulat Utemuratov.

Ahead of the April 5 premiere, Culture and Sports Minister Arystanbek Mukhamediuly said that movies like Amre could help authorities educate younger generations about the cultural achievements of their antecedents.

For the industry, this is being seen as a chance to push Kazakhstan’s non-arthouse output a little more energetically into the international market. To that end, producers enlisted filmmakers from the United States and elsewhere in the hope of hitting the right note. The task of setting the general thrust of the project fell on American director Jeff Vespa and screenwriter Benjamin A. van der Veen — both of whom have relatively slim resumés, going by their IMDB pages.

The cast too is multinational, with perhaps the most recognizable face being that of Abbie Cornish, the Australian actress who starred in the Oscar-nominated Three Billboards Outside Ebbing, Missouri.

“Domestic viewers will learn about Kazakhstani heroes who are not that well known. And foreigners will learn about our culture at the start of the 20th century and the conditions in which our artists had to operate. Since we also plan to release this film internationally, it was important that the movie be made to high international standards,” Shishkin told Eurasianet.

Kazakhstan’s previous attempts to break into the international market have met mixed success. Nomad (2005) was set during the 18th century, during an era of warring on Kazakh land, and cost $40 million or so. The film was energetically promoted by the government, but proved a dismal failure. Seven years later, director Akan Satayev released a vaguely similar-looking epic, Myn Bala: Warriors of the Steppe, although for a more modest $12 million, according to the figure published on IMDB.

The impetus to keep hammering away at the international market has come from President Nursultan Nazarbayev, who has instructed officials to work with foreign companies in their efforts to attain peak professionalism in the industry.

In November, Minister Mukhamediuly met with executives from major production companies in Astana, including Walt Disney, Warner Bros, Paramount Pictures and HBO, to explore options for cooperation and to tout Kazakhstan as a venue for film shoots. The encounter does not appear to have generated any immediate results, however.

To boost Amre’s chances, the movie was shot entirely in English, with the Latvian capital, Riga, standing in for 1920s Paris.

“That was more convenient for the international film crew,” said Shishkin of Kazakhfilm. “We dubbed the movie into Russian and Kazakh. [The Kazakh] actors dubbed themselves, so the local viewers shouldn’t be too bothered by it.”

Only the scenes featuring just Kashaubayev and Shokay were shot in Kazakh, since it would have been odd for the actors to address one another in a foreign language, Shishkin explained.

No international release date has yet been set, but Kazakhfilm is gunning for later this year. For the meantime, they want to see Amre become a hit in Kazakhstan.

Shishkin said the early figures are promising. Since the premiere, there have been 250 daily screenings at 70 cinemas across the country. The takings have reportedly been competitive.

Viewer response appears positive too. Maulen Ospanov, a man in his 20s who saw the film at Kinopark 8 with his girlfriend, was impressed.

“I hadn’t even heard of this musician before. Amre was a discovery for me. Until now, filmmakers in Kazakhstan have been fixated with gangsters and glamor, which was trendy about 10 years ago, but I think audiences here are sick of films like that,” Ospanov told Eurasianet.

Fussier viewers were a little put out by the loose treatment of historical detail, however. In a review posted to YouTube, Almaty journalist Tulegen Baitukenov complained that almost none of the events shown in the movie actually occurred.

In her own review, critic Gulazhar Mashrapova said Amre was “a case where the child ended up looking more like its American parent.”

“This is a typical Hollywood biopic, quite unrelated to anything documentary-like,” Mashrapova said. “In this case, Amre is exaggeratedly idealized, while the Soviet authorities are exaggeratedly demonized.”

But Mashrapova told Eurasianet the slick Hollywood format is ultimately more appealing to modern audiences, including those in Kazakhstan. “If after watching the movie, viewers go and Google the name Amre, that is already a result,” she said.

Shishkin said criticisms about historical accuracy were wide of the mark anyway.

“This isn’t even a biopic — it’s a musical drama based on real-life events. First of all, this is a work of fiction in which there is space for creative liberties. The main aim is to tell people about Amre, the first Kazakh musician to be received so rapturously by European audiences,” he said