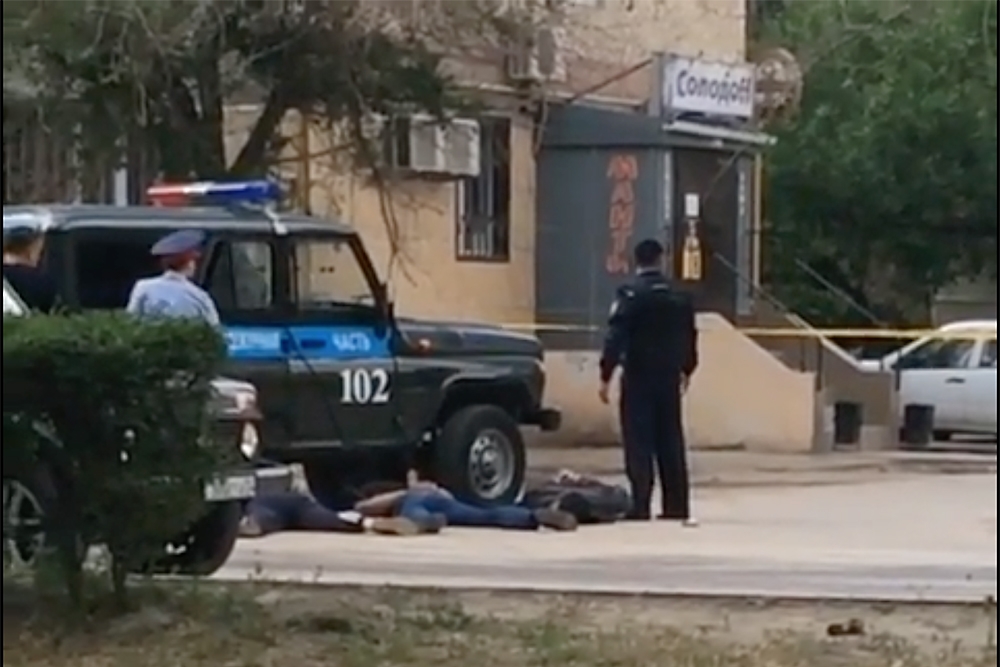 A video posted to social media on June 5 shows three men, who were detained by police, laying face down on the ground with their hands bound behind their backs during a shootout in Aktobe, Kazakhstan. Security officials have described the violence in Aktobe as the handiwork of religious extremists during which 18 people were killed: 12 gunmen, three servicemen and three civilians. (Video Frame Grab)

The weekend’s bloodshed in Kazakhstan seemed to catch the government off-guard. While Kazakhstan has experienced radical-driven violence in the past, until a few days ago authorities seemed more concerned about security threats emanating from domestic political critics than from Islamic militants.

It took almost a full day after the spate of deadly shootouts broke out in the western oil city of Aktobe for either Prime Minister Karim Masimov or President Nursultan Nazarbayev to make a public statement about the events.

“The head of the state is maintaining this issue under his control,” Masimov told a June 6 Cabinet meeting in perfunctory remarks on the violence.

Security officials have hastily described the violence in Aktobe as the handiwork of religious extremists — code for militant Islamists — but such is the extent of the information blackout that definitively establishing motives is difficult. The plug was pulled on Internet connections in the city soon after the unrest began, and what little independent information has filtered out has come through phone calls and SMS messages conveying scant witness testimonies.

Authorities have served as the only source for almost all the details about events in Aktobe on June 5. The first incident occurred at 2:28 pm, when, according to an official account, a large group of people stormed a hunting supplies shop, killing a sales clerk and a security guard, and making away with 17 weapons. Some from that group of attackers stole a police patrol car and went to another hunting supplies shop. Others commandeered a bus, which they used to ram the gates of a National Guard base, where they engaged in a firefight with servicemen, three of whom were killed. Authorities declared a state of emergency, and the city was placed under curfew.

The Interior Ministry said there was yet another attack, on June 6, on a security checkpoint near Aktobe. Three attackers were admitted to a hospital with wounds sustained in that clash — one of them died.

While the violence was still raging, state media mostly ignored developments. As late as midnight of June 5, state news agency Kazinform carried only two items alluding to the events — one that characterized the unrest as robberies gone wrong and another that reproduced a brief Interior Ministry statement. Evening television news bulletins dedicated scant reports to the bloodshed.

Local media’s patchy coverage of the unfolding drama meant that many Kazakhstani citizens were able to glean information only from Russian television.

“I heard how on [Russian state television news station] Rossiya-24 our mayor was saying everything was calm and not to worry. This was on Rossiya, and our local channels showed nothing,” said one Aktobe resident, a housewife. “Most shops and malls are closed. There are few cars around town and we haven’t been out of the house since yesterday. I switched on the local channels this morning thinking there would be some information, but there was nothing — not on [state channel] Khabar and not on [privately owned] KTK.”

As routinely happens during news blackouts, the rumor mill went into overdrive, generating some extravagant claims. One medical worker in Aktobe told EurasiaNet.org on condition of anonymity that there were rumors circulating that the armed gang were plotting to poison the reservoirs of the city water utilities company. The same person cited a neighbor living above one of the hunting supplies shop attacked on June 5 as saying she saw seven people killed, far more than the official tally. None of that information could be independently verified.

The Aktobe events occurred at a time when the government was focused on containing a volatile source of socio-economic discontent – land protests.

State media has for the past few weeks fixated on the presence of a “fifth column” inside Kazakhstan — implying at stages that opponents of reforms that would have seen the maximum period of land leases to foreigners being increased from 10 to 25 years were being mobilized by mysterious outside forces. In a startling development on June 6, however, the National Security Committee announced that it suspects jailed Kazakhstani businessmen Tokhtar Tuleshov, a figure with pronounced pro-Russian sympathies, of organizing and financing that protest movement.

Some have been quick to question whether the government has focused excessively on anti-land reform demonstrators — whose rallies claimed no serious casualties — and too little on other, potentially more destructive elements.

“For the longest time they denied the very possibility of terrorist acts taking place in the country, which they promoted to the world as an ‘island of stability,’” political analyst Dosym Satpayev wrote in a snap commentary on his Facebook account.

Terrorism jumped to the top of the agenda in 2011, when Kazakhstan succumbed to a string of attacks seemingly inspired by radical Islam, many of them in the west of the country. The attacks, many of them botched, left scores dead — mostly suspects and members of the security forces that they were targeting — and culminated in a deadly rampage by a gunman in the southern city of Taraz. Even then, government officials initially attempted to downplay talk of the threat of terrorism and instead attributed the incidents to organized crime before recognizing the rising radical threat.

But Astana-based sociologist Serik Beissembayev, who has conducted numerous interviews with people convicted on terrorism charges, has drawn a more worrying picture — one that suggests Aktobe may only be the tip of the iceberg.

“When you talk about radicalism, you need to understand that in all countries with a Muslim majority, there is a portion of believers that is radicalized in its ideas and views,” Beissembayev told EurasiaNet.org.

Beissembayev likened the radical-minded section of the population to a pyramid, with most rejecting violent methods but some — the point of the pyramid — being willing to resort to bloodshed. You cannot have the violent few without the nonviolent many underneath.

“It is not necessarily the case that they are all potential terrorists. They can co-exist peacefully with the rest of the population. But studies show that it is this environment that creates and fuels those who decide to commit violent acts.”

Beissembayev said that because of factors that have yet to be understood, the gunmen in Aktobe were moved to action. “In the case of Aktobe, for all intents and purposes, we see a few followers of radical ideologies shifting from a passive to an active phase,” he said.

There are various theories, however, that point to festering resentments among the population.

Much irritation was provoked by Aktobe regional governor Berdibek Saparbayev’s veiled threats last week against local activists who had organized a petition to prevent the construction of a planned factory that some citizens worried could create pollution. Although the petition gathered only around 573 signatures, the initiative was enough to prompt Saparbayev to warn that the authorities would take measures against “the illegal collection of signatures.”

“Don’t go to rallies, don’t sign petitions. Have things here become like under the communists in China?” the reader wrote.

While nobody would suggest this particular issue would have sparked such a violent reaction, the episode clearly illustrates that authorities — especially in the regions — appear tone-deaf to public discontent and its potential for toxic consequences.