Kazakhstan and its presidential election: A new chapter or more of the same?

Ahead of the election this weekend, where the winner is a foregone conclusion, we held a Q&A with our experienced team on the ground. 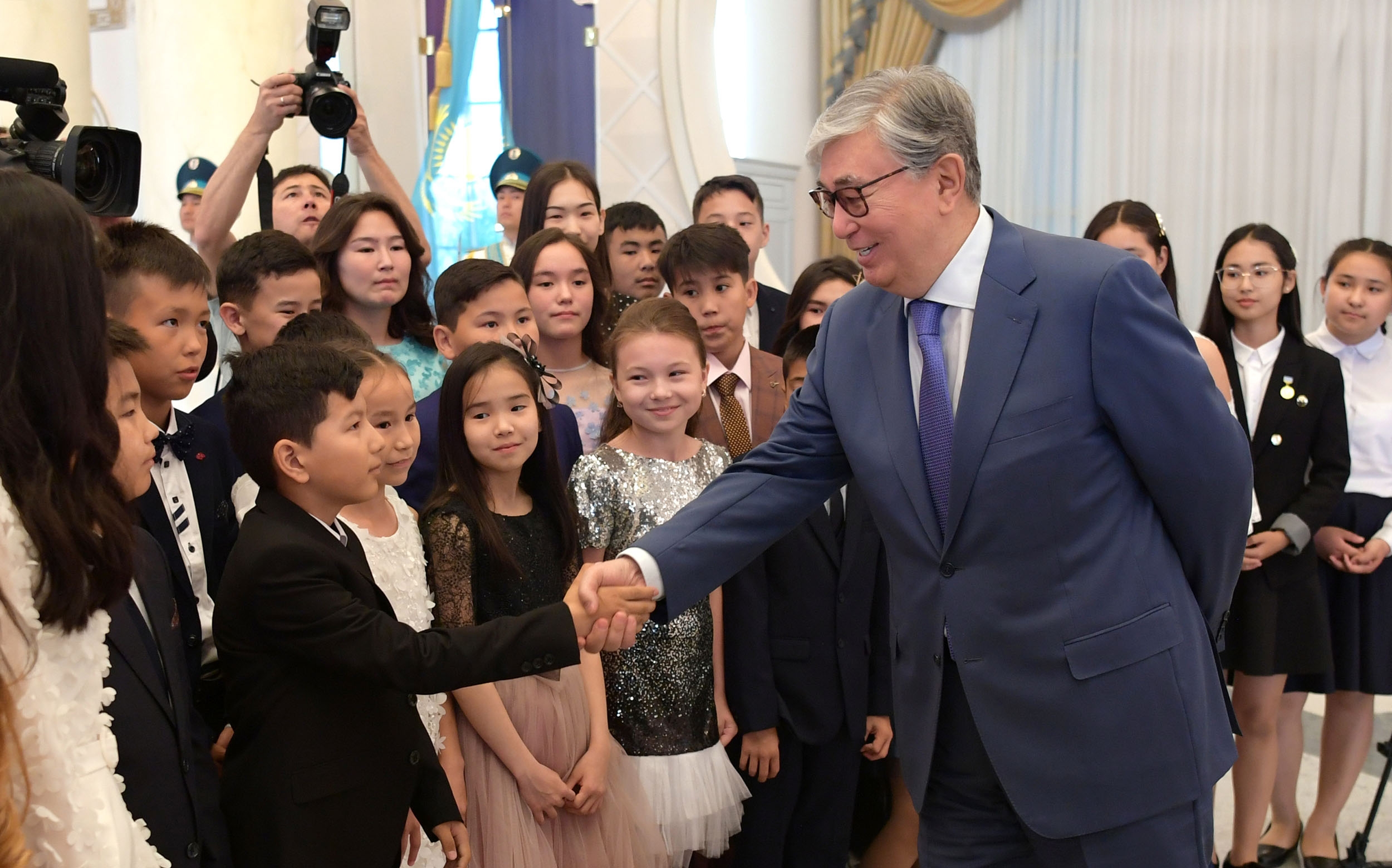 Kazakhstan goes to the polls on June 9.

The presidential election is historic is one sense: It is the first time that voters in the country will not get to cast a ballot for Nursultan Nazarbayev, who stepped down in March after three decades in power.

But, interim President Kassym-Jomart Tokayev, the man who will replace Nazarbayev, is, for his detractors, little more than a Mini-Me. A slightly younger version of the same thing, who will continue to pursue the same awkward model of authoritarian modernization and uneven social and economic development.

For some insight into the nuances of this election, Eurasianet is turning to its experienced team of reporters, who have collectively racked up decades of experience covering the region: Joanna Lillis, Almaz Kumenov, Chris Rickleton and Aliya Uteuova.

But first, the basics. Who is actually running? Well, mostly nobodies.

Tokayev will win, because he has the entire apparatus of the state machine behind him. Then there is mild-mannered opposition politician Amirzhan Kosanov, whose participation was a surprise concession from the authorities.

After that, the recognition factor falls off a cliff: Daniya Yespayeva from the pro-government party Ak Zhol; Toleutai Rakhimbekov from the rural issues-focused Auyl political party; Zhambyl Akhmetbekov, who was put forward by the Communist People's Party of Kazakhstan; Sadybek Tughel, who belongs to a movement called the Eagles of the Great Steppe; Amangeldy Taspikhov, a former functionary with the ruling Nur Otan party. The Wikipedia page for this election is an unwittingly accurate and cutting comment on this line-up – the spaces where images for four of these candidates should be are just anonymous gray cutouts.

But let’s see what our writers make of all this election business.

Eurasianet: Joanna Lillis, why elections now? How to make sense of the timing?

Lillis: This is about legitimizing the rule of Tokayev as Kazakhstan’s president after his assumption of power following Nazarbayev’s resignation. Right now he’s an unelected president, albeit one who came to power legitimately according to the constitution. To secure his legitimacy at home and abroad, those in charge of the succession process – Nazarbayev and his close entourage – will now assure Tokayev’s election with a large landslide, in a micromanaged and stage-managed vote. Questions will remain over the legitimacy of the election for several reasons, including that the authorities always use the trappings of power to secure the results they want and that the political playing field is not level, but at least no one will be able to say that Tokayev is an unelected president.

Eurasianet: In your book, Dark Shadows, Tokayev gets only a glancing mention. He has long been an important, but behind-the-scenes, operator. Why was he handpicked and how he is going to handle this task?

Lillis: The consensus among Nur-Sultanologists is that he’s a relatively neutral figure who wouldn’t arouse strong antipathy from the rival elite groups who always compete for power and resources around Nazarbayev. Had he chosen a more politically or economically powerful figure with strong backing from one group or another, that would have aroused strong opposition from rivals and brought about a destabilizing power struggle, which Nazarbayev wanted to avoid at all costs.

Political analyst Dosym Satpayev recently put to me an intriguing theory that political succession in Kyrgyzstan served as a salutary lesson for Nazarbayev. There, a destabilizing public rift has emerged between Sooronbai Jeenbekov, the president, and Almazbek Atambayev, the former president who anointed Jeenbekov as his successor. According to this theory, Nazarbayev wanted to be sure to choose a malleable loyalist who would definitely do his bidding without going rogue. That makes sense.

Eurasianet: That makes sense. Almaz Kumenov, you live in Almaty, the largest city in the country. Is there much election fever? Can you even tell there is an election going on?

Kumenov: You can feel the election fever on Facebook. A lot of people – not just experts and activists, but also people who have never seemed that interested in politics – are discussing candidates, especially Tokayev and Kosanov. Some of them are talking about who they will vote for.

Many people support Kosanov. This preference seems strongly influenced by the recent prosecutions of activists and renaming the capital – from Astana to Nur-Sultan.

On the streets though, the billboards are the only reminder that there is an election coming up.

Eurasianet: But wait, if everybody is talking about Kosanov online, does that mean he has a chance?

Kumenov: He has no chance of winning since 30 years of elections in Kazakhstan have shown how authorities use administrative tools to get the result they need. The question is not who will win – there is no doubt that will be Tokayev. It is what percentage of the votes Kosanov is allowed to get. I'm sure Kosanov also understands that this election is not about him getting to power, but that it is instead a good stimulus for his political aspirations.

Eurasianet: Recently, you reported on the televised election debate. What were your impressions?

Kumenov: The election debate was not that interesting because it was totally artificial. It looked like a stage play of characters who knew in advance how they should be acting and what they should say. When you watch a debate, you don't expect candidates to read out the responses to questions. I wouldn't say it was a big shock though – this is Kazakhstan.

Eurasianet: So, Chris Rickleton, you’ve been looking a little closer at Kosanov. What do you make of him? It surprised us all when he was allowed to run? Why do you think that happened, and how do you think he will fare?

Rickleton: The debate over Kosanov is not really about whether or not having his name on the ballot serves a purpose for the regime – he has admitted this much himself. Rather it is about whether or not he "struck a deal" with authorities regarding the tone and scope of his pre-electoral campaign, and over what he will do once the results are in. [Editor’s note: Kosanov denies any suggestion he has “struck a deal.”]

My view is that despite his history in opposition, Kosanov does not look like the type of opposition candidate you would find in a vote in Ukraine, or even Kazakhstan's more politically dynamic neighbor, Kyrgyzstan.

The regime's popularity has plummeted in the last five years thanks to post-oil crash economic stagnation and a notable tightening of the political screws. That offers anyone challenging an establishment figure like Tokayev a lot of space to play with. Instead, the clever anti-government messaging and social media campaigns are coming from young activists in Almaty, who are ignoring Kosanov's candidacy completely.

Anybody can talk about systemic corruption in Kazakhstan. Even Nazarbayev acknowledges this as a problem. But the time for stating the obvious has gone, and this opposition candidate seems unable to take his criticisms to the next level by targeting politicians rather than policies.

Kosanov is on record as saying that if the count is fair, the vote will go to a second round. But what will he do after Tokayev cruises to victory, and he picks up say 10 percent of the vote?

Eurasianet: What will Nazarbayev be doing now? Enjoying a well-earned rest?

Rickleton: For Nazarbayev, resting is time that could be better spent basking in the limelight. I think Kazakh citizens will still be seeing a lot of him on their television screens, just as they have in the weeks since his resignation. He has the national Security Council and a newly created office of the First President to run after all! This will inevitably mean tiresome surges of speculation whenever the 78-year-old's public appearances slow down or tail off completely for any significant length of time. "What is Nazarbayev doing?" will continue to be the question on everyone's lips.

Eurasianet: This sounds like the whole thing has been preordained by the people in charge. So, Aliya Uteuova, what do you think? Have you detected a lot of cynicism about this election?

Uteuova: I think there was always silent cynicism among Kazakhs regarding the elections. While the government's tactics are about business as usual, the people are not silent anymore. The "Kazakh Koktem" (Kazakh Spring) and "Oyan, Qazaqstan" (Wake Up Kazakh) movements are the catalysts, but the frustration has been building for decades.

The announcement of snap elections prompted many to voice their discontent both in social media and on the streets. Imagine Bernie Sanders or Joe Biden having less than three months to campaign. By declaring snap elections, interim President Tokayev is trying to safeguard himself from accusations of rigging. The most recognizable name on the ballot is Tokayev’s, and people are inherently more likely to vote for candidates they recognize.

On social media platforms, there's heated debate on whether to cast a vote or boycott the elections. But the fact that people are having these discussions for the world to see is a step forward.

Eurasianet: You have been looking at some of the young up-and-coming activists in Kazakhstan. What do you think they are going to bring to the table in terms of the country's future political development?

Uteuova: Kazakh youth has been taught to stay in line. The aftermath of Zheltoksan riots [in December 1986], break-up of Soviet Union, Perestroika, and what our parents witnessed has seeped into us through osmosis, not to speak of the [ruling party] Nur Otan camps that we were put into as schoolchildren. But the young activists who unraveled the "You can't run away from truth" banner stepped outside that line. Barely two months have passed and the level of public dissent among Kazakh youth is at an unprecedented high.

It might have been possible for the government to control dissent when all they had was print news and television channels. But Instagram gave Kazakh youth daily a peek into what democracy looks like. My peers follow trailblazers like [U.S. Congresswomen] Alexandria Ocasio-Cortez and Ilhan Omar, read the Economist, embrace feminism, seek education abroad. It is impossible to stay oblivious to what the West brings, including freedom of speech.

Activists like Asya Tulesova and Suinbike Suleimenova are breaking the status quo. Recently, they unraveled a declaration of the "Oyan, Qazaqstan" (Wake Up Kazakh) activist coalition. In it, they expressly state that they will never take government money and they declare their intent to help build the pillars of democracy. Our leaders often call on foreign-educated Kazakhs to return and help advance Kazakhstan. Tulesova, Suleimenova and countless other activists are the ones who are doing just that. Except their actions might not fit with the government's agenda.