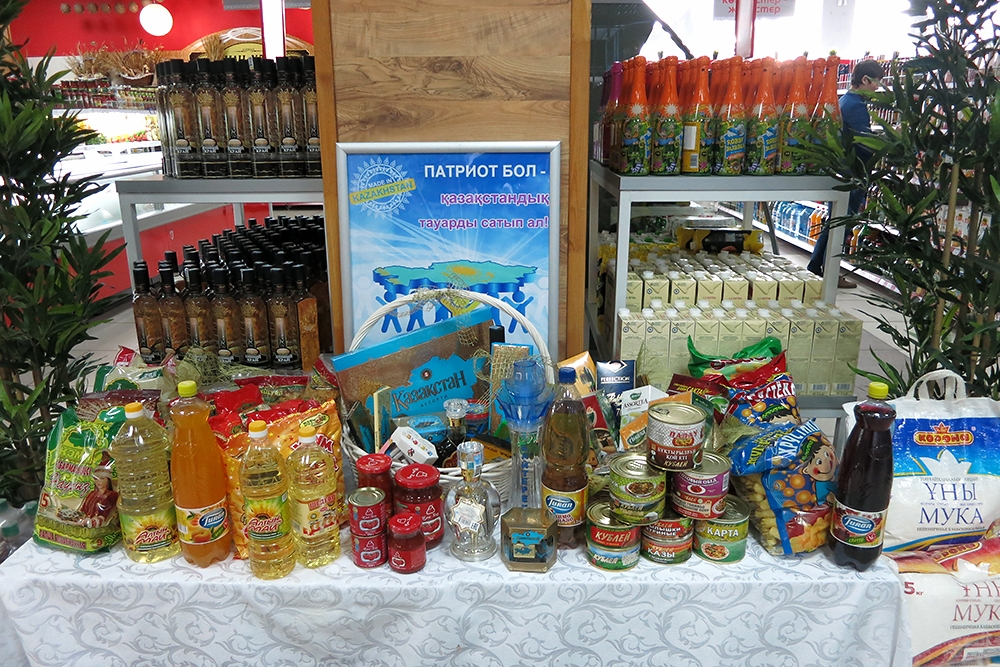 A "Be a Patriot - Buy Kazakhstani!" sign beckons shoppers to buy Kazakhstani-made produce in a Kostanay supermarket in February. The nationwide campaign aims to counteract a flood of Russian imports that threatens to drive domestic producers out of business. (Photo: Joanna Lillis)

Posters in supermarkets all around Kazakhstan implore shoppers these days to “Be a Patriot – Buy Kazakhstani!” Their appearance is a clear sign of Kazakhstani discontent with the Eurasian Economic Union, a Russia-led trade group that was supposed to promote mutual growth but which critics say has so far only inflicted economic pain on Astana.

The supermarket posters feature the national flag colors of blue and yellow and are part of a Made-in-Kazakhstan campaign, spearheaded by President Nursultan Nazarbayev. It aims to protect Kazakhstani producers of a wide array of goods from being undercut by a flood of Russian imports.

Increasingly, when it comes to commerce, Kazakhstan and Russia are acting like frenemies. The two countries profess to be close allies, but are engaging in a tit-for-tat trade skirmish, in which they are pulling each other’s produce off supermarket shelves amid dire pronouncements about health and safety risks.

“A trade war is unfolding between Russia and Kazakhstan,” noted a recent commentary in the influential Russian business daily Kommersant.

The row marks yet another hiccup in the short life of the Eurasian Economic Union (EEU), which launched in January. Russia’s economic woes, along with the steep decline of the Russian ruble, have played a major role in stalling the EEU’s development.

Highlighting the growing imbalance in bilateral trade, Kazakhstani imports from Russia in January rose by 7.3 percent in year-on-year terms, while exports to Russia plummeted by 41.2 percent over the same period, according to latest available figures from Kazakhstan’s Statistics Committee.

Kazakhstan fired the first shots of the trade war, pulling Russian meat (including genetically-modified pork and sausage full of nitrates) from supermarkets in March, followed by mayonnaise and chocolate in April. Substandard Russian produce presents a health hazard and amounts to “consumer deception,” declared the government’s Committee for the Protection of Consumer Rights.

Russian authorities also accused Kazakhstan of acting as a conduit for imports of American dried fruit that are currently banned in Russia.

Russia is no stranger to engaging in food fights with other formerly Soviet states. Most notably, the Kremlin banned imports of Georgian and Moldovan wine – a move widely seen as a Kremlin attempt to use its economic muscle to disrupt those states’ efforts to move closer to Western political and economic institutions.

The Kremlin’s decision to get tough with close ally Kazakhstan has raised eyebrows because, as Kommersant put it, the food bans “directly threaten the two countries’ economic integration” under the auspices of the EEU. Both Nazarbayev and Russia’s Vladimir Putin in the past have touted the EEU as a driving force of their tight-knit relationship.

At present, both governments are playing down the dispute, with varying degrees of conviction. Reports of a trade war are “quite a strong exaggeration,” Kremlin spokesman Dmitry Peskov declared laconically.  Meanwhile, Kairbek Uskenbayev, Kazakhstan’s deputy economy minister, offered a more spirited defense: such suggestions are “absurd” when “integration is proceeding at full steam” with Kazakhstan’s “friendliest and closest” partner.

Yet storm clouds have been brewing within the fledgling EEU (which also includes Belarus and Armenia, with Kyrgyzstan joining in May) since before its launch on January 1.

These days, Russian goods are sometimes up to 30 percent cheaper than locally produced wares. This discrepancy is squeezing a broad array of economic sectors – from automakers to dairy producers, cattle farmers and confectioners. Some Kazakhstani manufacturers are warning that the crisis threatens to drive them out of business.

Northern regions of Kazakhstan bordering Russia have been particularly hard hit, with imports flooding in, and shoppers flocking to nearby Siberia to snap up bargains.

Bargain hunters opting for Russian products are short-sighted, railed Nazarbayev on April 10, since “they are driving our automobile and food enterprises into the ground, and it is Kazakhstanis themselves who work there.”

Critics in Kazakhstan have long decried this economic partnership as unequal. Russia accounted for 33.3 percent of Kazakhstan’s imports last year, but only 6.6 percent of exports. And the latest statistics suggest the relationship is becoming even more skewed in Moscow’s favor this year: in January, Russia’s share of Kazakhstani imports rose to 35.6 percent while the export share dropped to 5.3 percent.

Astana has ruled out one measure that would make Russian imports less competitive and Kazakhstani exports more so – a currency devaluation that would return exchange rates to previous levels. Restoring the old balance would require a tenge devaluation of up to 45 percent, according to Fitch Ratings.

Devaluation would boost manufacturers and exporters, but – as last year’s experience proved – also cause domestic economic upheaval and heighten the possibility of social unrest. Instead, Astana is promising to go with a sliding tenge devaluation – a prudent policy, according to economist Olzhas Khudaybergenov, a former adviser to Kazakhstan’s National Bank.

Khudaybergenov suggested the government should consider temporary restrictions, lasting no more than 18 months, on some Russian imports, as well as offer subsidies to selected domestic manufacturers. The government has already slapped a short-term ban on Russian oil products. Such temporary steps should be sufficient to keep Kazakhstani companies going until the point when “everything will settle down,” he told EurasiaNet.org on the sidelines of a finance conference in Almaty in March.