Around a dozen people are being investigated for possible embezzlement. 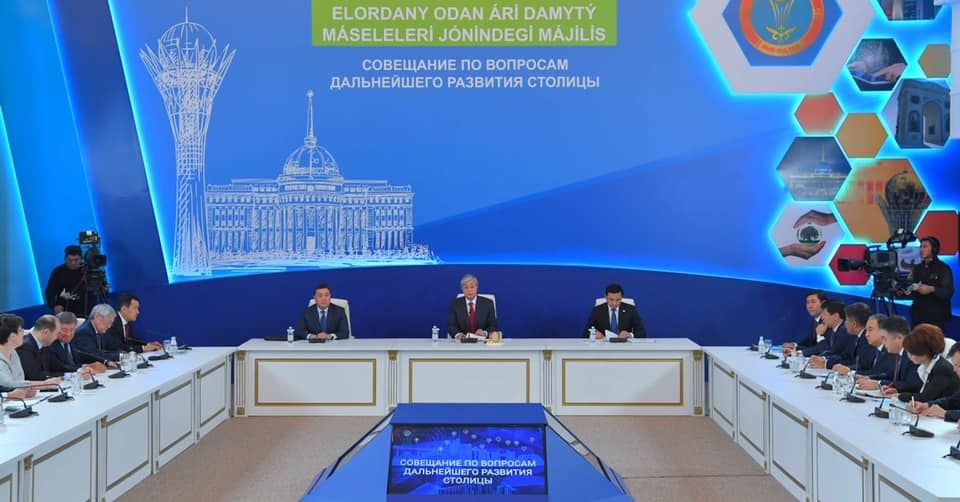 A city situation: An October 8 conference on the current state of Nur-Sultan, the capital of Kazakhstan. (Photo: Presidential administration Facebook)

The state anti-graft body announced on October 10 that around a dozen people are being investigated for possible involvement in the embezzlement of funds while running the Astana Light Rail Transit Project. Construction was frozen in April amid reports of mismanagement and fraud.

The contention of the anticorruption agency is that Astana LRT, the state-owned company created to execute the project, inflated the financial terms of the 2015 agreement to do the work.

“While a state evaluation estimated costs at 2.6 billion tenge ($14 million at the exchange rate of the time), Astana LRT signed a contract for 4.2 billion tenge and paid the contractor 3 billion tenge,” said Sergei Perov, a representative of the anticorruption agency. “The difference ... was embezzled through bogus companies.”

Astana Light Rail Transit Project, known as LRT for short, is designed as a 22-kilometer elevated railway line that is supposed to connect the airport and a new train station through the city center. The project was estimated at $1.9 billion. In 2015, China’s state-owned Development Bank agreed to provide a long-term loan that was supposed to pay off $2.6 billion in 20 years. Chinese construction companies were due to do the construction.

The initial plan was for the work to be completed by 2017. But construction only began in May 2017, pushing the anticipated commissioning date to the end of 2019. And then in April, the city administration announced that the project was being frozen indefinitely because of a disagreement with China Development Bank over the terms of the loan.

The LRT imbroglio has been on Tokayev’s mind for some time now.

“According to the city hall, the projected flow is 146,000 people a day. But right now, there are only 2,000 passengers traveling between the airport and a new train station. How are you going to increase the flow of passengers 70-fold? It’s incomprehensible,” Tokayev said at a Cabinet meeting on July 15. “There is a risk that this unprofitable project will entail constant allocation of subsidies and be a burden to the government.”

A couple of weeks after Tokayev made his remarks, an arrest warrant was issued for Talgat Ardan, ex-chairman of Astana LRT. He was in charge of the project’s execution from the very beginning but was fired in 2017.

The company’s new leadership complained about financial issues, prompting the anti-corruption agency to launch an investigation that exposed cases of embezzlement. Ardan has fled the country and is object of an international wanted notice.

On October 8, Tokayev said that Astana LRT's ex-chairman should not be the only person fingered for the troubles at the project and that the anti-corruption agency should “go deeper.”

Perov said more than 10 people are being investigated.

“We are now questioning all the people involved in the project, including the city hall’s top officials. We have confiscated all the documents, identified the pool of suspects and are verifying to what extent they are guilty,” said Perov.