City authorities plan to turn the area into a landscaped park. 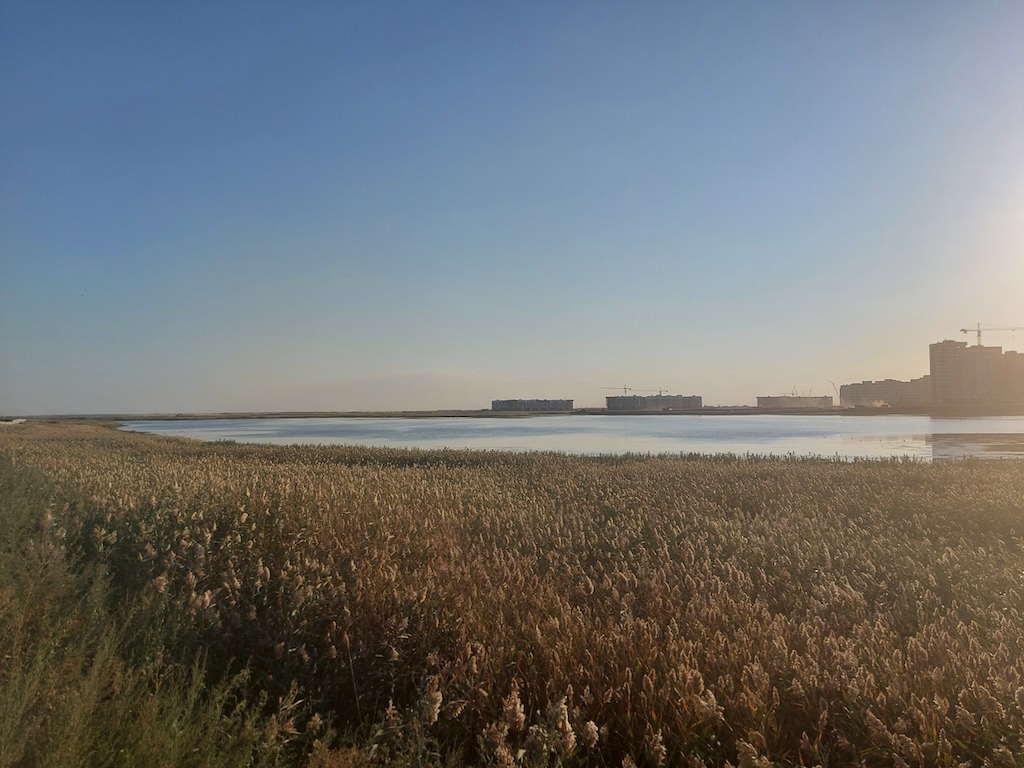 Campaigners striving to save a rare ecosystem dubbed the “lungs of the city” in Kazakhstan’s capital have resorted to desperate measures after their pleas fell on deaf ears. They are conjuring up spirits.

On September 7, performance artists staged a dramatic intervention at Nur-Sultan’s Small Taldykol Lake, a 200,000 square meter stretch of water and marshland that is a habitat for hundreds of birds and other wildlife, including endangered species. City authorities say they intend to turn the area into a landscaped park in the middle of a new residential district of uniform high-rise apartment blocks.

Dressed in the attire of a baksy, a traditional healer associated with shamanism, artist Askhat Akhmedyarov attempted to halt construction trucks. Fellow artist Aigerim Ospan accompanied the ceremony by playing a melody on a kobyz, a traditional stringed instrument.

The performance artists said they were enacting a ceremony known in Kazakh as Baqsy Saryny, which can be loosely translated as “incantation of the healer.”

Video footage posted on Instagram by an account run by the SOS.Taldykol group, set up last year to campaign against the plans, showed Akhmedyarov pushing at a Kamaz truck, the tassels on his baksy costume flying as construction dust billowed around, while Ospan sat in front of a bulldozer playing a haunting tune on her kobyz.

“The lake does not have a voice; we can be its voice,” she said in remarks quoted by Vlast.kz. “The kobyz is a sacred instrument whose sounds recall the sounds of nature and the cry of the swan … We artists have come to defend the lake and cure it.”

Taldykol is “on the brink between life and death,” SOS.Taldykol said in captions posted to one video, which claimed that the lake was shrinking as construction waste was dumped in it.

“In moments of crisis, steppe communities turned to shamans,” the group said. “Artists are turning to traditions to appeal to society. The shaman stands up to preserve the balance of nature that is violated by humans.”

The area around Taldykol, which lies a short walk from Nur-Sultan’s landmark tent-shaped Khan Shatyr shopping mall, is a hive of construction activity, a Eurasianet reporter who visited in late August found.

Adjacent roadworks to lay sewage lines to the new residential area contribute to the noise and pollution in what was once a peaceful lake on the edge of the new part of the city and is now being consumed by urban sprawl.

What is happening at Taldykol is a “crime against nature,” Ruslan Urazaliyev, a researcher at the Association for the Preservation of Biodiversity, a conservationist group, told the ADAMDAR/CA website.

There are at least 25 breeds of bird living in the delicate lake and marsh eco-system, including many that are endangered, the website reported.

SAT-NS, the construction company building around Taldykol, has countered that it is only pouring sand into “permitted areas of the lake.”

“In the future this place will be beautiful, but people do not understand that,” company official Mural Otynshiyev told Radio Azattyq last month.

A petition and an appeal by activists to President Kassym-Jomart Tokayev have gone unheeded.

Nur-Sultan city hall has also dismissed concerns. Despite the massive construction, the lake “will be preserved,” it said in a statement on September 6: “Dredging work will also be carried out to raise the level of the water. The marsh area will thus become a cleaned-up body of water and will be a park zone.”

“City hall has dreamed up so many myths about Small Taldykol that they have evidently started to sincerely believe in them,” remarked Urazaliyev. “Otherwise, how to explain such a negligent and profligate attitude to natural resources located within the boundaries of the city?”