Mothers traveled to the capital to complain about housing. 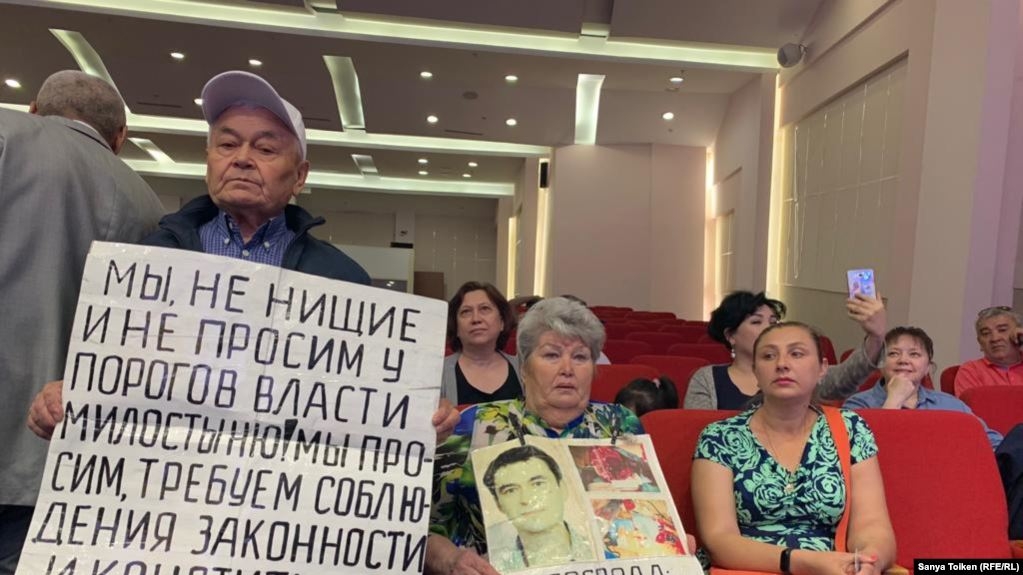 Demonstrators at the Nur Otan offices on March 4. (Photo: RFE/RL)

As Kazakhstan prepares to hold a presidential election on June 9, pockets of citizens are taking to the streets of the capital to demonstrate their unhappiness.

The authorities are adopting measures to make sure there are no nasty surprises.

The square in front of the Akoda presidential administration building in Nur-Sultan (formerly Astana) has been cordoned off by police. The same has been done around the offices of the executive.

Interior Minister Yerlan Turgumbayev said that an operation codenamed Law and Order is now in place to ensure public safety in the run-up to the vote. He demurred when asked by journalists on June 4 if the sudden escalation of security measures in Nur-Sultan was connected to a small gathering of protestors in front of the Akoda a day earlier.

On June 3, dozens of mothers of large families and single mothers assembled in a peaceful demand for the government to provide them with housing, RFE/RL’s Kazakh service reported. Many said they had traveled to the city from remote regions. Some complained that they have been waiting for years to be provided homes under a state program to assist low-income families.

The demonstrators, who chanted slogans and patriotic songs, demanded that the interim President Kasym-Jomart Tokayev, who is set to win this weekend’s election with ease, and Prime Minister Askar Mamin come out to address them in person to discuss their queries.

That didn’t happen, but the demonstrators were instead met by Deputy Prime Minister Gulshara Abdykalikova, Labor and Social Protection Minister Berdibek Saparbayev and Nur-Sultan Mayor Bakhyt Sultanov. The officials promised that the petitions would all be given individual attention.

Mothers have become a motor for quasi-political agitation since a horrific house fire in Nur-Sultan earlier this year claimed the lives of five children. The blaze, which occurred when the financially struggling parents of the children were away from home to do night jobs, generated a swell of outcry over perceptions that the government is doing too little to support poor families.

The demonstrators in Nur-Sultan argued that the government has failed to live up to promises it made in the wake of that tragedy.

Deputy Nur-Sultan Mayor Yerlan Kanalimov told RFE/RL that the government plans, from after June 17, to provide hard-up families, especially those with many children, with mortgages at 2 percent annual interest. The regular mortgage rate charged by banks is typically around 15 percent. Beneficiaries will also receive a one-off coupon payment worth 1 million tenge ($2,600).

Tokayev has been sanguine about the protests of impoverished mothers, arguing that their plight should be “addressed in a calm, businesslike manner and in respect of the law.”

Things are anything but calm, however.

On June 4, several dozen protesters besieged the Nur-Sultan offices of the ruling Nur Otan party with complaints about having had their rights infringed by justice and law enforcement bodies.

Retirees Vladimir and Valentina Tarasov, for example, said that police in 2017 closed the case on the death of their 39-year-old son without properly completing investigations. Another woman said that her husband was sentenced to 10 years in prison on smuggling charges by a court in Almaty earlier this year, despite having evidence proving his innocence. They too asked to speak with Tokayev, but also got no joy.

In the meantime, police are busy going after activists.

Businesswoman Sanavar Zakirova, who used her social media accounts to summon people to a demonstration, wrote on Facebook on June 4 that she saw what she believed was an unmarked police car outside her home.

Tokayev is running for office on a platform of continuity from the rule of his predecessor and patron, the now-former President Nursultan Nazarbayev, who ran the country for three decades. The sporadic but mounting protests suggest he will need something fresh to dissipate the palpable public ill-will.