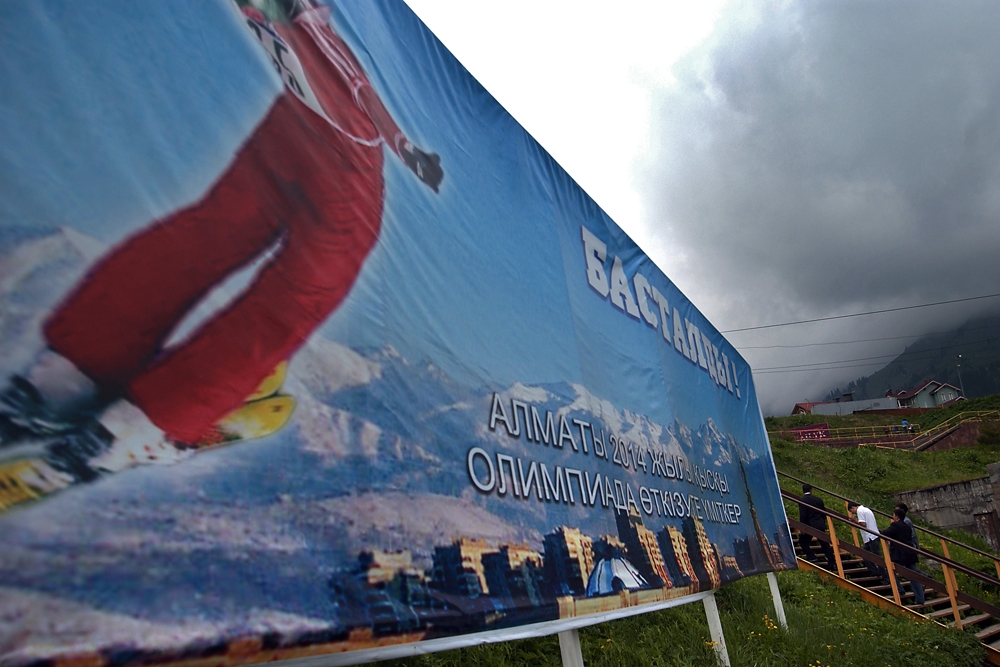 Visitors to the winter sports resort of Chimbulak in the Tien Shan mountain range walk past a billboard advertising Kazakhstan’s bid to host the 2014 Winter Olympics in Almaty in June 2006. Although Kazakhstan lost that bid to Russia, the Central Asian country is currently in competition against Beijing to host the 2022 Winter Olympics. (Photo: Dean C.K. Cox)

Kazakhstan is scrambling to keep its diplomatic options open amid rapidly rising Western-Russian tension. Not wanting to get dragged down by Western sanctions imposed on Russia, Kazakhstani President Nursultan Nazarbayev’s administration is ramping up an international charm offensive.

And as Astana seeks to win global hearts and minds, Western specialists, including former British prime minister Tony Blair, are being enlisted to help oil the wheels of the PR machine.

Kazakhstan is pursuing its aim via a variety of avenues. It already is represented on the UN Human Rights Council and is hoping to gain a seat on the UN Security Council. Authorities have also unveiled plans for an overseas development agency and are hoping to host the Winter Olympic Games.

Astana has long pushed for international roles that would enable it to punch above its global weight. Now, bidding for a non-permanent Security Council seat in 2017, Kazakhstan is trying to match its most successful coup to date: winning the chairmanship of the Organization for Security and Cooperation in Europe (OSCE) in 2010.

“It’s part of the longer-term strategy of promoting Kazakhstan as some sort of player on the international stage – making the international community aware of Kazakhstan,” Rico Isaacs of the UK's Oxford Brookes University, an expert on the country, told EurasiaNet.org. “Kazakhstan is promoting itself as a mediator of the interests of competing powers in the region – the big powers like Russia, China, the United States, and also countries like Turkey and Iran.”

Astana’s Security Council bid is calibrated to show that a country with a foothold in both Europe and Asia is ideally positioned to serve as a bridge between East and West – and serve as a go-between that could potentially help defuse the simmering confrontation between the Kremlin and Western powers.

The country’s leaders are reinforcing that image every chance they can get. Kazakhstan can be “an honest broker in an unsettled and challenging world,” Foreign Minister Erlan Idrissov said at last month’s launch of the Eurasian Council on Foreign Affairs, a Brussels-based think-tank for which his government has coughed up “modest funding.”

Idrissov has sought to highlight initiatives designed to demonstrate Kazakhstan’s benign international influence, from its track record promoting nuclear non-proliferation to its imminent launch of an overseas development agency, KazAID, which would engage in development initiatives involving poorer Central Asian neighbors and Afghanistan.

The Western-Russian standoff over Ukraine poses a particularly vexing diplomatic problem for Astana: it is unwilling to show disloyalty to its close ally, Moscow, but at the same time, it is determined not to sacrifice relations with the United States and Europe for the sake of the Kremlin’s geopolitical aspirations.

Moscow’s encroachment on Ukraine’s sovereignty – along with aggressive territorial claims voiced by Russian nationalists on parts of northern Kazakhstan and aspersions cast by Vladimir Putin on Kazakhstan’s statehood – have alarmed Astana. To ensure that the country is not overly vulnerable to possible Russian pressure, Kazakhstani authorities are intent on not being too closely associated with the Kremlin. “It’s important for Kazakhstan to keep distinguishing itself as a country, in order not to see an erosion of its sovereignty [by Moscow] and to indicate to the international community: We’re not Russia,” Issacs said.

While the government strives to strike a fine diplomatic balance, critics at home are scathing of its PR initiatives.

“Of course, every self-respecting country should be interested in having a positive image in the eyes of the international community,” opposition politician Amirzhan Kosanov told EurasiaNet.org. Yet, he sees shortcomings in Astana’s methods. Firstly, “the authorities want to attract the attention of the international community exclusively through showy, costly, over-ambitious events,” and secondly, “it’s not the state that’s being promoted but one person – the president,” Kosanov contended.

Diplomatic successes have a tendency to be transformed by Astana into a PR coup for Nazarbayev personally, critics suggest, pointing to the OSCE chairmanship as an example: the administration trumpeted it as a triumph despite controversy over Kazakhstan’s human rights record.

“This international image-making is to overcome these concerns about human rights and the failure of democratization in Kazakhstan,” Isaacs says. Astana has been “very successful in diverting attention from these issues, using PR companies and high-profile Western politicians like Tony Blair to gain international recognition.”

“[Tony Blair Associates’] work in Kazakhstan focuses on supporting political, economic and social reform,” a spokesperson told EurasiaNet.org by e-mail, pointing to Astana’s recent signing of a cooperation agreement with the European Union as “a powerful reinforcement of Tony Blair’s belief that Kazakhstan is a strategically important country for the West and why the TBA team on the ground continues to work there.”

Nazarbayev denies any human rights abuses exist in Kazakhstan, but Idrissov has a more polished message for the Western audience.

“Rare among Eastern countries, Kazakhstan is a secular state that is making progress towards creating our own distinct and culturally attuned democracy. As with all young countries, we may sometimes falter, but I have no doubt that we are on the right road,” Idrissov said.