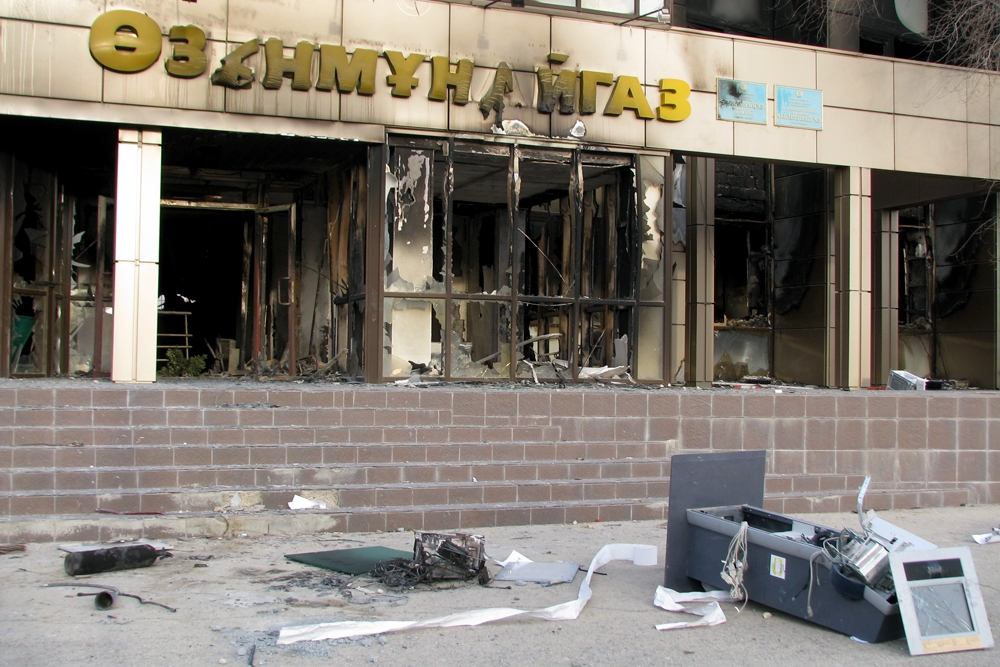 While several former oil workers and political activists have been recently released in connection with the unrest in Zhanaozen, three prominent leaders are still in jail awaiting trial. (Photo: Joanna Lillis)

No matter how hard officials in Kazakhstan try to bring closure to last winter’s outburst of violence in and around the western city of Zhanaozen, the incident continues to dent the Central Asian nation’s reputation for stability and rising prosperity.

At the heart of the lingering tension over the Zhanaozen tragedy -- in which labor unrest prompted rioting that turned deadly -- is the matter of culpability for the loss of life. The official death toll stands at 15. Questions about the conduct of security forces remain unanswered to a satisfying degree. An official probe into events placed most of the blame for the violence on government critics and assorted malcontents.

At first, officials believed that prosecuting alleged rabble-rousers would suffice to defuse tension. But the trials held to date have done more to stoke anger than to dampen it. Four separate trials of police and protestors have already been completed, ending in the convictions of 45 civilians and six members of the security forces. Perhaps the highest-profile trial, involving prominent political figures accused of fomenting unrest, has yet to commence.

No date has been set for the start of the next Zhanaozen trial, but all but three of the former oil workers and political activists who were expected in the dock have been quietly freed in recent weeks. The three prominent figures still behind bars are: Vladimir Kozlov, leader of the unregistered opposition Alga! party; opposition activist Serik Sapargali; and former oil worker Akzhanat Aminov, who was last summer convicted of leading an illegal strike in Zhanaozen (which later became the catalyst for the violence).

This suggests Astana is pursuing a divide-and-rule strategy, showing leniency toward some, but singling out the most vocal activists to take the rap for fatal clashes.

“Hence while Authorities are more lenient towards [labor] protesters and their activists, they have a much harder line on the political activists,” Lilit Gevorgyan, regional analyst at IHS Global Insight, told EurasiaNet.org. “It is relatively easy to deal with disenchanted oil workers by restoring their salaries and meeting some of their demands but the political activists are more problematic for the authorities, hence harsher terms for them.”

Gevorgyan pointed out that President Nursultan Nazarbayev, even while acknowledging police wrongdoing and legitimate grievances among the oil workers, has maintained that “political opponents have tried to destabilize the country taking advantage of existing grievances.”

Bolat Atabayev and Zhanbolat Mamay, two prominent activists abruptly arrested in mid-June on incitement charges were among those who have been released from custody in recent weeks, even after fresh charges of calling for the overthrow of the state had been pressed against them.

Atabayev, a respected 60-year-old theater director who had been declared a prisoner of conscience by Amnesty International, was released on July 3 after signing a repentance pledge; Mamay’s release followed nine days later. Both have declared they have no intention of renouncing their political views. Mamay announced defiantly on Facebook after his release that he would fight for the freedom of those still jailed.

The catch-and-release policy does not appear to have done much, at least initially, to help sway local public opinion in Zhanaozen. On a July 16 visit to the area, Prime Minister Karim Masimov was greeted by placard-waving protestors, including one carrying a message that read, “The blood will not wash away!” according to a report in the Respublika newspaper. Relatives of those jailed believe their loved ones are scapegoats for the violence.

Internationally, Nazarbayev’s administration is now coping with calls from the United Nations for an independent probe into Zhanaozen. On a July 12 visit to Kazakhstan, UN High Commissioner for Human Rights Navi Pillay said an international investigation was needed to address “unanswered questions” including whether using live fire against unarmed demonstrators was “necessary and proportional.”

Despite Astana’s pledge of fair, even-handed proceedings, critics have questioned whether justice has been done, amid allegations (declared unfounded by investigators) that evidence was extracted through torture. The UNHCR’s Pillay echoed concerns, pointing to “serious question marks over the fairness of judicial processes.”

Astana’s response to Pillay’s comments was swift and unequivocal: the UN high commissioner had “given a one-sided evaluation of events,” countered Foreign Ministry spokesman Altay Abibullayev.

Notwithstanding the bristling response to Pillay, Astana has tacitly acknowledged mistakes in the handling of the Zhanaozen crisis: authorities have taken action to ensure that industrial disputes are rapidly defused and announced blueprints to promote national socioeconomic wellbeing and tackle unemployment and social disaffection in Zhanaozen.

Yet the pending trial of political and trade union activists seems certain to stoke tension.
“By addressing the immediate economic and social needs of the oil workers the government may eventually move on from the dark shadow of Zhanaozen,” said Gevorgyan. “However, this shadow is unlikely to go away entirely. The memories of Zhanaozen will revive in the event the government tries to quell other industrial strikes by the use of force.”