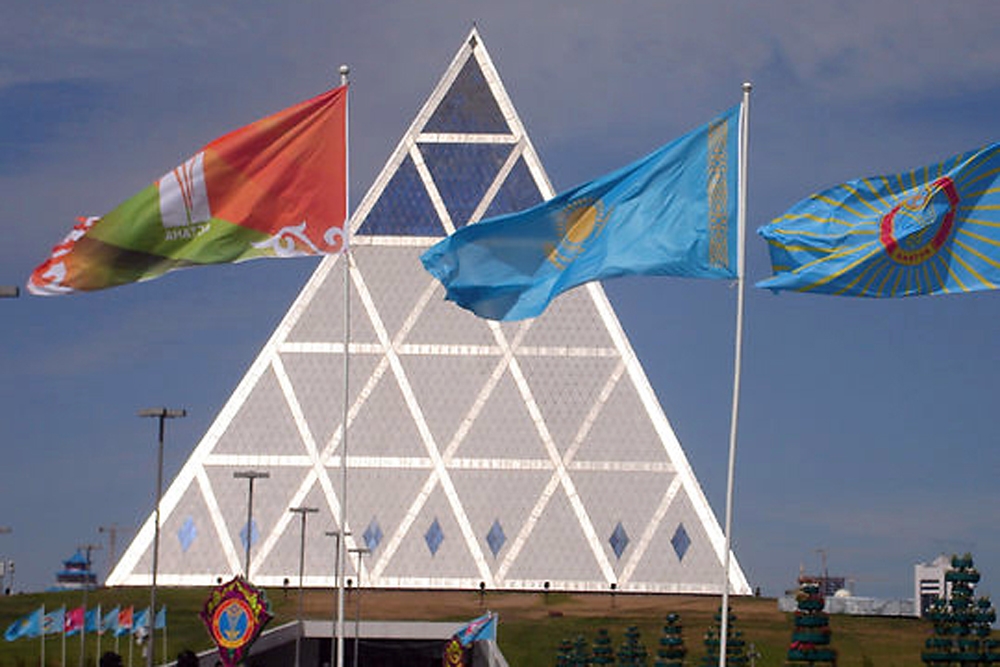 News of a foiled terrorist plot to blow up civilian targets in the Kazakhstani capital Astana emerged recently, just as authorities consider the adoption of draconian new controls to root out extremism.

Six suspects are accused of scheming to blow up Astana’s pyramid and its new opera house, and assassinate unidentified “senior figures.” If substantiated, the case would mark a departure from previous tactics: radicals have hitherto targeted security forces rather than civilians in sporadic and haphazardly planned attacks that started in 2011.

This year and last, Astana has jailed scores on terrorism charges while significantly tightening restrictions on religious groups. Now authorities are poised to adopt an anti-extremism blueprint that – according to a draft seen by EurasiaNet.org – contains a raft of measures mostly favoring the stick over the carrot.

Officials are awakening to the need to tackle the terrorism threat, says Yerlan Karin, an analyst specializing in security matters. “The fact that the authorities have taken the threat of terrorism seriously, critically reviewed the national security system, and drawn up new approaches in anti-terrorism policy has encouraged a lowering of the threat level,” he told EurasiaNet.org.

The draft State Program on Counteracting Religious Extremism and Terrorism for 2013-2017 contains strategies to bolster existing policies, such as restrictions on religious literature and close monitoring of religious groups and missionary activity. It also outlines expansive new policies, including installing video surveillance in places of worship and monitoring students studying theology abroad. To show it means business, Astana plans to allocate $1.3 billion for the five-year program.

Critics are concerned that the net to capture extremists is being cast too wide. “It’s very, very clear what the intent of the government is: to ratchet up the controls that already exist on all kinds of religious activities, when people should be free to get involved in them without state permission or state controls,” said Felix Corley of Oslo-based religious freedoms watchdog Forum 18. The group published its own analysis of the state’s blueprint recently.

The General-Prosecutor’s Office, which is spearheading the program, declined to answer questions by telephone and did not immediately respond to faxed queries. Astana has argued that an uptick in extremist activity in Kazakhstan – previously regarded as a haven of stability in a volatile region – necessitates a hard-hitting response.

The attacks began with Kazakhstan’s first ever suicide bombing in the oil city of Aktobe in May 2011, continuing that October with botched suicide attacks in another western oil hub, Atyrau, followed by a rampage by a gunman in southern Taraz. There have been periodic ambushes of the security forces and fatal shootouts with suspected radicals. Terror-related incidents since 2011 have left a death toll of at least 67, mostly suspects and law-enforcement officers.

A range of factors are fuelling extremism in Kazakhstan, Karin says. “These are various domestic circumstances, such as socioeconomic problems and corruption, and also external factors, such as proximity to unstable regions, the openness of borders, the intensification of activity by terrorist organizations, and so on.”

The draft program also mentions a lack of public awareness about religion and the impact of radical ideologies disseminated via the Internet. Programs to address these perceived problems would include placing the topic of religion on the school curriculum starting in 2014. It is unclear how the subject would be presented in classrooms.

Controls over students from Kazakhstan studying theology abroad are being tightened. Astana has agreed with Saudi Arabia that Kazakhstani theology students wishing to study there need their government’s permission. In addition, the anti-extremism blueprint floats the idea of dispatching Kazakhstani officials abroad to monitor theology students – though how this would work in practice is unclear.

The program mentions the concern that the terrorist risk will grow after NATO forces’ withdrawal from Afghanistan in 2014. Officials are already alarmed about regional militant activity involving Kazakhstan’s citizens: security chief Nurtay Abikayev said on June 7 – citing Russian intelligence – that there are 100 Kazakhstanis fighting on the Afghanistan-Pakistan border. It is unclear how reliable the figure is.

President Nursultan Nazarbayev remains keen to stress the credentials of Kazakhstan as a bastion of religious harmony. Around 70 percent of the population identifies themselves as Muslim and 25 percent as Orthodox Christian; other faiths represented range from Jehovah’s Witnesses and Baptists to Ahmadi Muslims and Sufis. In his state-of-the-nation address last December Nazarbayev warned that the fight against extremism, while necessary, “should not turn into a witch hunt or develop into a fight against religion.”

Yet for some the rhetoric about religious harmony is wearing thin. Many religious communities in Kazakhstan are “highly concerned about intrusive state controls,” Corley says, while the sweeping methods which “target everyone in a preemptive strike” are a waste of resources.

“They’re wasting a lot of their efforts on people who seem in no way dangerous,” Corley said. “Having controls on every mosque, every church, every temple – is that really a good use of state money, time and effort? What about the human rights of the people who are attending them?”

**UPDATE: On June 20 EurasiaNet.org received a response from the General-Prosecutor's Office to faxed queries which stated that: "All the program's provisions are in line with the country's constitutional norms guaranteeing the rights of citizens to freedom of conscience and respect for religious convictions. The program drawn up by us is aimed above all at at thwarting religious extremism and terrorism and does not envisage any measures for monitoring the behavior of law-abiding citizens."