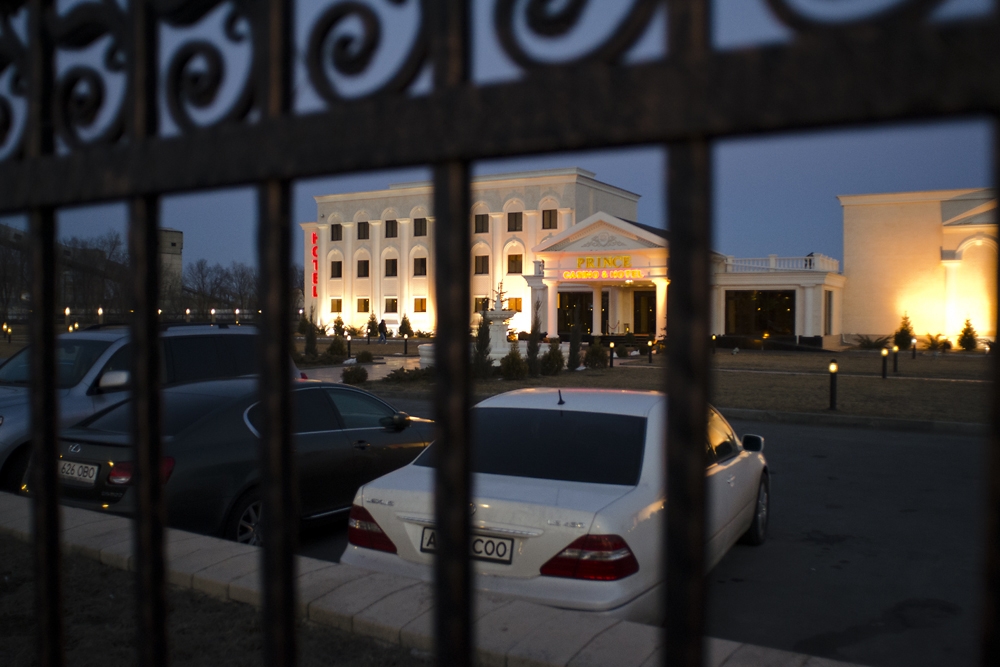 The casino center of Kapshagay caters to the high rollers. (Photo:Dean C.K Cox)

Kazakhstan may have already moved its casinos into two Las Vegas-style enclaves, but the gambling industry has found a new way to grow via the spread of a new version of a one-armed bandit.

Bookmakers specializing in sports gambling are proliferating in Kazakhstan. And now, thanks to the spread of electronic payment machines, just about anyone can place a bet easily and anonymously.Thousands of the machines – originally designed to ease the purchase of phone credit and to pay utility bills – are located in high-traffic locations, including grocery stores and bus stops across the country.

The automated machines accept bets starting at 500 tenge ($3.30), putting gambling within reach of those in the lowest income brackets, including students. Though the legal age for gambling in Kazakhstan is 21, there’s no oversight of the machines, prompting concerns about underage gambling. Anyone can place a bet at the bookmakers’ automated gambling points, but to bet via public payment terminals run by companies like QIWI, one must have a registered account.

Lawmakers have debated legislation to impose tighter regulations on the gambling industry, including modifying the location and opening hours of bookmakers’ offices; making it harder to obtain licenses; and regulating online casinos. Tursunbek Omurzakov, a member of Kazakhstan’s national parliament, told Tengrinews.kz on April 5 that he hopes new regulations will be in place by summer.

This is not the first time Kazakhstan has attempted to tackle gambling. In 2007 casinos were forced to relocate to two purpose-built betting zones – Shchuchinsk near Astana, the capital, and Kapshagay near the commercial capital Almaty. The casinos cater to the super-rich, with a core of high rollers visiting several times a week and playing for high stakes. At these spots, the entry fee, in chips, costs between $300 and $500. This places casino gambling in Kazakhstan out of the reach of most Kazakhstani citizens.

Designed to help regulate and tax this often-shady business and confront gambling addiction, the 2007 move to contain casinos experienced some initial success: the number of casinos dipped while tax revenue rose sharply from $4.8 million in 2007 to around $33.5 million in 2012, according to the Finance Ministry.

Although authorities succeeded in regulating the casinos, the move, it turns out, had little effect on curbing the growth of gambling in Kazakhstan.

Bookmaking operations that have appeared in recent years target those in lower income brackets. Betting offices, with names like Fair Play, Bet City and Olimp, have become fixtures in cities. According to a spokesperson for the Association of Bookmakers and Totalizers of Kazakhstan (ABTK), a license costs around 1.1 million tenge ($7,336) a year, and a bookmaker pays a flat tax of 130,000 tenge ($860) per month for each betting terminal it runs.

Gulsum Jalyalitdenova, a spokeswoman for the Kazakhstan State Agency for Sport and Physical Education, said Astana officials believe strict regulations are the best way to prevent gambling from giving rise to criminal activity and social problems. “There are only two possible ways of regulating gambling: either a complete ban, or limiting the locations of gambling with strict qualification requirements. … A complete ban often results in the appearance of an underground gambling business controlled by organized crime,” Jalyalitdenova told EurasiaNet.org.

Kazakhstan's licensed bookmakers have opened a nice revenue stream for state coffers. From 2007 to 2011, bookmakers provided around 935 million tenge ($6.2 million) in tax revenue, according to the Tax Committee of Kazakhstan's Finance Ministry. Estimates for 2012 alone put the figure at somewhere between 600 and 800 million tenge ($4-$5.3 million).

An ABTK representative told EurasiaNet.org that it acknowledges the concerns of some MPs about the increased presence of bookmakers and underage gambling, but feels that stricter legislation is not the answer. “We believe that the problem is not in tightening control of the bookmakers, but in strict implementation of existing standards, which … cover all aspects of the business,” the ABTK representative said.

The ABTK contends that gambling is not a big problem in Kazakhstan, estimating that only around 2 percent of the population regularly places bets. “The most common violation of unscrupulous companies is the acceptance of bets from persons under 21; often there are school students at the betting offices,” the representative said.

A police raid on a bookmaker’s office in Astana on April 1, for example, netted one underage gambler. On a recent weekday afternoon, a EurasiaNet.org correspondent visited a bookmaker in Almaty and found a group of students from a nearby technical college placing bets at the counter. One 19-year-old said that he visited the spot two or three times a week and had experienced no problems placing bets on his favorite sport, dog racing.