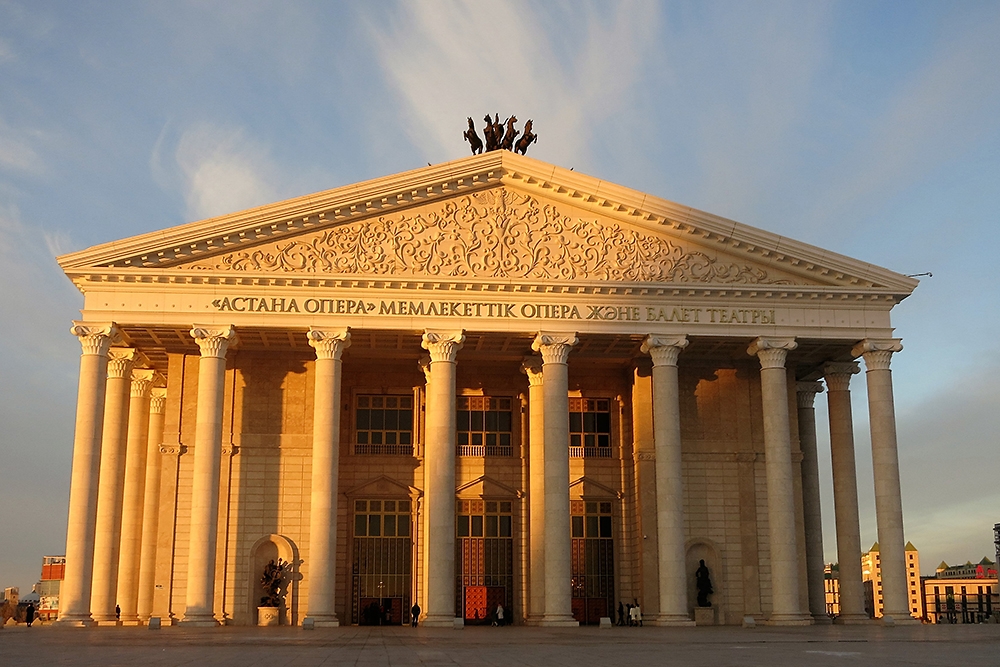 Kazakhstan may be in the grip of an economic crisis, but it was a full house at Astana Opera, a grandiose theater whose neoclassical design stands out on the city’s space-age skyline.

The theater was staging Karagoz (“Black-Eye”), a Kazakh-themed ballet telling a Romeo and Juliet-style tale set on the steppes of Kazakhstan.

With its ingenious decor suggesting the country’s rolling empty landscapes and its sumptuous costumes in traditional designs worn in the courts of the Kazakh khans, the ballet held the audience gripped.

As the curtain fell, Astana’s arts aficionados rose to their feet for a standing ovation.

Karagoz is one of the productions being performed at Astana Opera as part of the theater’s quest to showcase Kazakh arts and culture, at home and beyond Kazakhstan’s borders.

“Our goal is to make classical forms of art like opera and ballet part of the spiritual life of Kazakhstanis, to instill in them a taste for music and high esthetic demands, and to successfully integrate national arts into the global cultural process,” said Astana Opera director Toleubek Alpiyev.

This season, the third since Astana Opera opened in 2013, it is showing Italian classics such as La Boheme and La Traviata alongside Kazakh favorites like Karagoz and Abay, a recent operatic premiere about the life of a 19th century poet and national cultural icon.

“We’re building our repertoire out of productions that should be in the repertoire of any good opera theater… staging masterpieces from among the world classics,” Alpiyev told EurasiaNet.org in an e-mailed response to questions.

At the same time, the theater is on a mission to show off to a domestic and international audience “the country’s richest classical musical heritage,” said Alpiyev, a 68-year-old former musician who opened Astana’s first opera and ballet theater fifteen years ago.

In 2014, he moved to the newly built Astana Opera, a grandiose statement of a building whose opening was so high-profile that it was the target of a foiled terrorist plot to blow it sky high, taking dignitaries like President Nursultan Nazarbayev with it.

Built on Nazarbayev’s personal orders, Astana Opera is now playing a role in his nation-building pursuits, which gathered momentum last year as Kazakhstan — which marked its 24th anniversary of independence in December — celebrated the 550th anniversary of Kazakh statehood.

The arts are a means harnessed by Nazarbayev to foster a patriotic spirit among his people, said Rico Isaacs of Oxford Brookes University, an expert on Kazakhstan who has studied the topic.

“Astana is using arts, and culture more broadly, as a way to put forward certain symbolic myths and narratives about the Kazakh nation, about Kazakh nationhood,” he told EurasiaNet.org.

Highbrow arts like opera and ballet and more accessible platforms like film and TV are used “to imagine a past that is specifically Kazakh, to give a sense of history to the notion of the modern Kazakh state,” Isaacs explained.

One case in point is a historical Game of Thrones-style TV series about the first Kazakh khanate, which is due to be screened in Kazakhstan this spring and then made into a feature film.

But Astana Opera has more ambitious artistic aspirations beyond the country’s borders: it wants to put Kazakhstan’s capital on the map as a center for the arts — regionally and even internationally, if Alpiyev has his way.

Alpiyev has cultivated contacts with some of the world’s top opera houses, from Moscow’s Bolshoi and St Petersburg’s Mariinskiy to Milan’s La Scala.

International collaboration has not been without its own drama. A production of Aida in 2014 prompted a prima donna-style outburst from Italian producer Franco Zeffirelli, who accused La Scala of flouting his rights in selling it to Astana Opera. In the end, the show went on — with Zeffirelli’s blessing.

Boosting the city’s artistic reputation would do no harm to the legacy of Nazarbayev, who made it clear at Astana Opera’s grand opening in 2013 that he had his eye on long-term heritage.

A country that builds infrastructure like roads, schools and hospitals is looking years or decades ahead, he said, but “a country that erects theatres is looking centuries into the future.”

Its peaked roof is topped with an image of Tomiris, queen of the ancient Sakhs, who are held to be the ancestors of the Kazakhs, and its entrance is flanked by sculptures of musicians playing traditional Kazakh instruments.

The ceiling in the plush red-and-gold interior has a circular design reminiscent of the shanyrak, the top of the felt yurt in which the once nomadic Kazakhs formerly dwelled.

Arts critics laud the theater for a design boasting clear views of the stage from all its 1,200 seats and excellent acoustics. The secret is in the wood – beech, birch, cherry and Canadian pine.

As Alpiyev pointed out, none of this has come cheap. Like counterparts around the world, Astana Opera survives on state subsidies (put by Kazakhstani media at some $14 million annually), and it currently faces budget cuts as an economic crisis bites.

Nevertheless, the theater has not abandoned a core principle — established in Soviet times — that the arts should be affordable for the masses: tickets start at just 500 tenge ($1.40).

After the curtain fell on Karagoz for the interval, the chandelier-lit lobby, where bars served champagne to an appreciative audience, thronged with an eclectic crowd: arts lovers dressed up in their evening finery, pensioners decked out in Soviet war medals, teenagers sporting casual dress.

“I often come to Astana Opera,” student Togzhan Raimbek told EurasiaNet.org. “I like Kazakh ballets best of all, because they show our culture, habits and traditions.”

“It’s making a huge impression on me,” said Ashimkhan Kanayev, a university professor visiting from Almaty, of the Karagoz ballet.

As for Astana Opera, “it’s a wonderful fusion of a temple of the arts and skillful performers, which is giving everyone enormous pleasure.”