Kazakhstan: Astana Takes the Lead in Lobbying for Nuclear-Free World 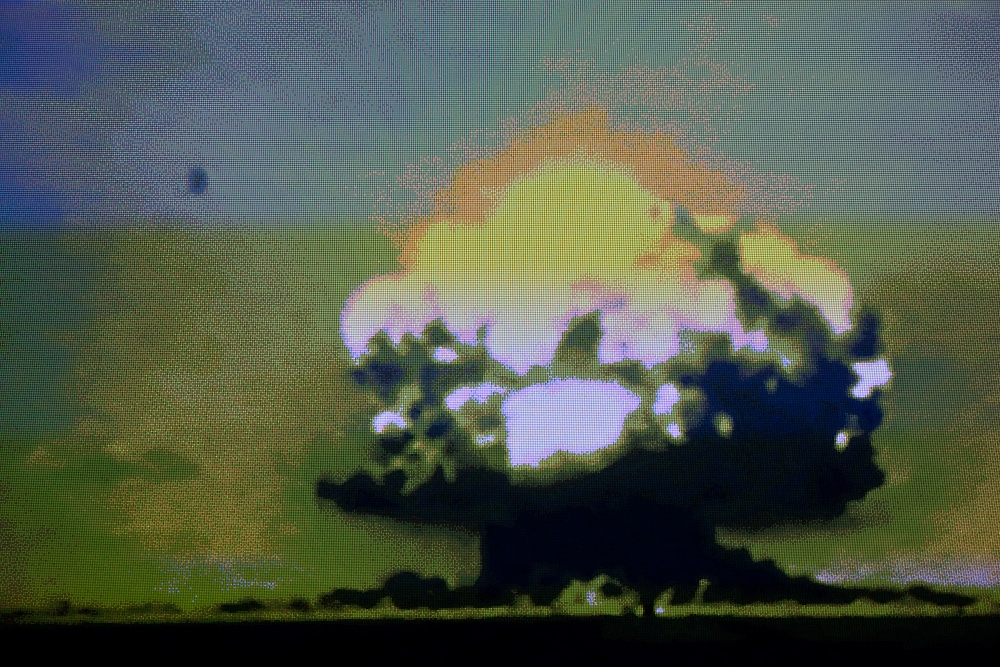 A video inside the museum in Kurchatov educates visitors about Kazakhstan's nuclear legacy. (Photo: David Trilling)

A major box-office hit in Kazakhstan last year was "The Gift to Stalin," a movie that introduced a new generation to a poignant page in Kazakhstan’s history as a Soviet nuclear guinea pig. The film ends with a mushroom cloud engulfing the steppe as the Soviet Union detonated its "gift to Stalin" -- its first nuclear device on August 29, 1949.

Next month marks the 60th anniversary of that blast at the Semipalatinsk test site (known in Russian as the "polygon") in eastern Kazakhstan. Following that first test, over 450 subsequent atomic explosions took place over a four-decade span before a groundswell of public opposition helped generate a moratorium on testing. The site, which had the dubious honor of hosting over 70 percent of the USSR's nuclear tests, was finally closed in 1991, the year of the Soviet Union's collapse.

The catalyst for the 1989 moratorium was a grassroots anti-nuclear movement that gained traction amid Mikhail Gorbachev's glasnost campaign. The Nevada-Semipalatinsk movement sprang up after a leak of radioactive gases in February 1989 sparked local outrage. Poet Olzhas Suleymenov galvanized opinion through anti-nuclear protests and speeches. Photographs from the period capture the mood, showing children waving placards saying: "No to nuclear testing!"

Nevada-Semipalatinsk received backing from officials running Soviet Kazakhstan, including the current president. Nursultan Nazarbayev voiced support after becoming leader of Soviet Kazakhstan in June 1989, and authorized the closure of the testing ground on August 29, 1991, as the Soviet Union collapsed.

Appearing at a memorial rally in June in Semey, formerly Semipalatinsk, Nazarbayev said the long-term effects of the nuclear explosions on the 18,000 square kilometer site -- which released energy 2,500 times that of the bomb dropped on Hiroshima -- are still unknown. The Peace Mission 2009 rally was held ahead of the 20th anniversary of the moratorium at Semipalatinsk, where the last test took place on October 19, 1989.

Speaking after laying flowers at a towering monument depicting an exploding mushroom cloud, Nazarbayev called for August 29 to become a global day of awareness about hazards connected with the production and use of weapons of mass destruction. "The drama of the test site is the drama of Kazakh land," he told the crowd of 25,000. "The trauma borne by our ecology is so serious that centuries will be required to restore it."

At least a million people were subjected to the effects of "nuclear insanity," Nazarbayev added, and 300,000 square kilometers of land are affected. "A ninth of Kazakhstan's territory, comparable with the territory of Germany, was turned into a toxic wasteland, crippled by hundreds of nuclear explosions," he said.

According to a 2008 study by the National Nuclear Center's (NNC) Institute for Radiation Safety and Ecology, up to 80 percent of the land is salvageable. The institute studied 600 inhabited settlements around the site and found contamination levels close to "normal global fallouts," posing virtually no threat to local people. The International Atomic Energy Agency backs those findings: three missions in the 1990s found that "most of the area has little or no residual radioactivity directly attributed to nuclear tests."

There is an exception: the NNC study found a "complicated radiation situation" in the flood lands of the Shagan River, a tributary of the Yertis River, situated to the southeast of the site. The area around the site remains populated. Between Semey and the town of Kurchatov on the edge of the testing ground lie scattered settlements, where herders graze their flocks on the scrubby steppe and water them in the Yertis. Kurchatov, 60 kilometers from the site of the 1949 test, houses the NNC, which conducts research at the test ground and has worked to convert it for peaceful scientific use, and the Park of Nuclear Technologies, a hi-tech center developing radiation technologies for industries including the construction, engineering and energy sectors.

Amid the scientific facilities stands a gruesome reminder of the past, inside a museum recounting the history of the Semipalatinsk site. One exhibit amounts to a chamber of nuclear horrors illustrating the devastating impact of nuclear explosions on living creatures. The displays include the hemorrhaged bladder and lungs of dogs, and burns on disfigured pig and sheep heads in bell jars.

This effect on living creatures is the most worrying legacy of the tests. Studies have shown increased rates of cancer, heart and thyroid disease, digestive system complaints and fertility problems in the area. But scientists warn it is difficult to draw specific conclusions because poor living standards and inadequate diet and sanitation may also be contributing factors. A joint Japanese-Kazakh study in 2005 found that a third of residents around the site felt they had bad health and 70 percent "recognized a causal relationship" with nuclear tests. However, figures from Kazakhstan's Statistics Agency do not show these areas reporting sickness rates significantly higher than many other regions in recent years.

The effects of nuclear tests on local people are vividly depicted in Leyla's Prayer, another Kazakh box-office hit, which appeared in 2002. In the film, the orphaned protagonist is among confused and sickly villagers shown being herded out of their settlements ahead of explosions before returning shortly afterward to the contaminated land.

Some $225 million has been spent on assistance programs to date, but many think more help is needed. In April, the United Nations General Assembly adopted a statement expressing "profound concern" about the effects of testing on ecosystem sustainability and about "humanitarian, environmental, social, economic and health problems." It called on the international community to do more to help Kazakhstan deal with the aftermath of the explosions.

After gaining independence, as well as closing Semipalatinsk, Kazakhstan relinquished the world's fourth largest nuclear arsenal. Astana now sees itself as ideally positioned to be one of the globe's strongest advocates against nuclear weapons. Semipalatinsk hosted the signing of an agreement among Central Asian states in 2006 setting up a nuclear-free zone, and Astana has offered to host a US-backed nuclear fuel bank aimed at curtailing proliferation of nuclear materials. Nazarbayev, meanwhile, used his Semey address to call for a new global Nuclear Non-Proliferation Treaty. Kazakhstan's responsible attitude to its nuclear legacy gives it "the absolute historic and moral right to act as one of the leaders of the world anti-nuclear movement," he concluded.