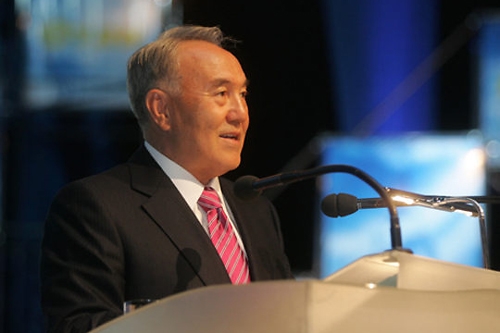 A shake-up of Kazakhstan’s political scene is under way with a revamped political party in Astana seemingly destined to play the role of tame opposition to the ruling party, Nur Otan. Analysts are cautioning that the apparent attempt by Astana officials to micromanage politics could backfire.

The chief potential consequence, according to some experts, is the move will make it harder for dissenting voices to be heard in the political discourse, thus causing disaffection to intensify among groups currently lacking political representation. A higher level of discontent, in turn, could foster political protests and instability.

The reshuffling of Kazakhstan’s political deck got underway on July 2, when Azat Peruashev replaced Alikhan Baymenov as the leader of the Ak Zhol party. Only the day before the move was announced Peruashev resigned his membership in Nur Otan, the party that serves as President Nursultan Nazarbayev’s support base. Baymenov, meanwhile, enjoyed a soft landing, securing appointment as chairman of the State Agency for Civil Service Affairs.

The process smacked of a top-down approach to party politics, Rico Isaacs, a lecturer in International Studies at the UK's Oxford Brookes University and expert on Kazakh political parties, told EurasiaNet.org. “It is likely that [Baymenov’s] move, and Peruashev taking over, was agreed with Akorda [the presidential administration],” he said, leaving Ak Zhol to become “a tame and loyal party which can oppose Nur Otan in the Mazhilis.”

Nur Otan holds all elected seats in the Mazhilis, the lower house of parliament. Constitutional amendments implemented since the last election preclude the possibility of a one-party parliament in the future, meaning that a second party will secure seats in the next election, regardless of its electoral support. The next parliamentary vote is scheduled to take place in August 2012, although there is speculation these days in Astana and Almaty that officials may call a snap election for this fall.

Whenever the vote is held, observers doubt Astana is prepared to see a genuine opposition party enter parliament.

“The change of [Ak Zhol’s] leadership is likely to be part of broader plans to ensure that the second parliamentary party is headed by a figure whose loyalty to President Nursultan Nazarbayev is unquestioned – and what more effective way to ensure this than by installing a former member of Nur Otan?” Anna Walker, a Central Asia analyst at London-based Control Risks consultancy, told EurasiaNet.org.

Kazakhstani pundit Nurlan Yerimbetov offered a succinct characterization for the development to the Guljan news website, describing it as “political prostitution.”

Countering that impression, presidential adviser Yermukhamet Yertysbayev insisted that Ak Zhol is becoming “an organization that will be a worthy sparring partner and a worthy rival to Nur Otan.” At the same time, Yertysbayev added, in a July 3 interview with Tengri News website, that parliament should not become a “political discussion club.”

Yertysbayev has recently been expounding his parliamentary vision, with Nur Otan flanked by a “constructive” opposition, pro-business party.

Peruashev – who is president of the Atameken Union entrepreneurs’ association as well as the Ak Zhol leader – has pledged that his new party will support small and medium-sized businesses, although critics say it may lobby more for big business. Peruashev is reportedly close to oligarch Aleksandr Mashkevich. He is also an associate of the president’s son-in-law Timur Kulibayev (both hold top jobs in the Atameken Union). This relationship, in particular, is fueling speculation that Ak Zhol could become a vehicle for Kulibayev to promote political ambitions.

Peruashev’s office told EurasiaNet.org on July 14 that he was not immediately available for comment on his new role.

With Ak Zhol, Peruashev has gained a name to trade on politically: Kazakhstani voters recall it as a genuine opposition party – which is what it was when established in 2002. After the other co-leaders split with Baymenov in 2005, Ak Zhol began to be seen as a tame opposition unwilling to criticize the administration.

“By utilizing this brand, and the party’s history, the authorities can claim to the West that they have ‘real’ opposition in parliament,” Isaacs suggested.

Ak Zhol’s overhaul could fuel disillusion among those who feel excluded from the political process, argued analyst Aidos Sarym, who suggested that the Nazarbayev administration was “trying to control politics.”

“People aren’t stupid,” he told EurasiaNet.org. “If they again become convinced that the authorities are ignoring them, that they aren't represented in parliament, or in state bodies, they start becoming even more disillusioned.”

Sarym pointed to recent events in energy-rich western Kazakhstan to highlight the risks of disillusionment morphing into radicalism. In particular, Sarym called attention to a recent security operation that is unprecedented in Kazakhstan. Launched after the premeditated killing of two police officers in the village of Shubarshi, it ended in a shootout and left 11 more fatalities: nine suspects and two members of the security forces. Police blamed organized crime, the same explanation they offered for a suicide bombing in the city of Aktobe in May. But the episode left some observers wondering if social disaffection was behind the bout of extremism.

Western Kazakhstan is also the scene of a tense standoff (now entering its third month) between striking workers and state oil and gas company KazMunayGaz which illustrates the type of disaffection that could spark instability. KazMunayGaz has dismissed hundreds of strikers in a dispute that recently hit international headlines when British singer Sting cancelled a concert in Astana in protest at their treatment.

Nazarbayev’s administration vaunts political stability as a key achievement for Kazakhstan, but Astana’s top-down approach to politics may not be the optimal way of maintaining it.

Co-opting Ak Zhol “does not really broaden political choice for the electorate in any meaningful way,” Walker said. “Genuine opposition movements, for example representing the striking miners, are unlikely to win any parliamentary seats, leaving a large section of the population in effect disenfranchised, and more likely to resort to protests as a way of expressing their grievances.”