President Tokayev has urged the public to remain calm. 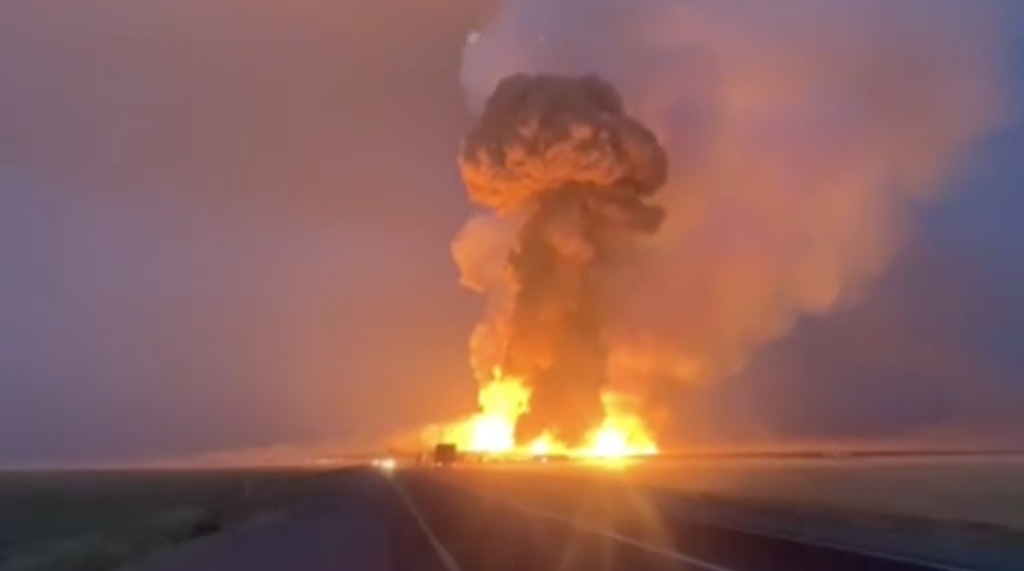 Screengrab of amateur footage of the blast.

A series of huge blasts at a munition depot in southern Kazakhstan on August 26 has killed at least 12 people, wounded over 90, and precipitated the evacuation of hundreds of residents from multiple nearby settlements.

Defense officials said that a string of six explosions occurred at the facility in the Zhambyl region, not far from the regional capital of Taraz, shortly after 7 p.m. No cause for the blast had been provided as of that same evening, but the Interior Ministry said a criminal probe had been initiated into suspected violations of rules on the handling of dangerous weapons.

Amateur footage filmed from a distance showed balls of orange flames surging dozens of meters into the air following the blasts. The Defense Ministry said that the depot was being used to store explosive material but not long-range projectiles, meaning that there was limited risk of fragments of material flying out of the epicenter of the blaze.

“The explosions are mainly manifesting as shockwaves, producing loud sounds and flames,” the ministry said in a press release.

This incident is reviving ominous memories of a similar incident from June 2019, when a fire at a military base near the town of Arys, in the southern Turkestan region, caused a major blast. On that occasion, the panic was especially pronounced as shells engulfed in the flames detonated and whistled through the air.

Casualties from this latest explosion, including at least 50 people working for government security agencies, are being treated at the Taraz city hospital and the nearby Baizak district hospital. Officials said 400 spots have been set aside across Taraz for people evacuated from their homes.

The Interior Ministry said at least 1,200 people had been removed from settlements near the stricken depot and that police were guarding the area to maintain public order and prevent looting. The villages being evacuated lie across a radius of at least 15 kilometers adjacent to an important highway running north of Kazakhstan’s border with Kyrgyzstan.

Toward midnight, President Kassym-Jomart Tokayev said in a message on Twitter that “the situation as a whole is under control” and he urged “residents of Taraz and the villages around to remain calm and vigilant.”

Dismay at the incident has already started being expressed online.

“Guys, this is already the seventh munitions depot blast we’ve had in 10 years,” activist Assem Zhapisheva wrote on her Twitter account.

And in a detail that may come to haunt military authorities in the coming days, defense officials reportedly confirmed that ammunition kept at the Zhambyl region facility had been moved there from Arys, the site of the 2019 blast.

**Updated on August 27 to include death toll.