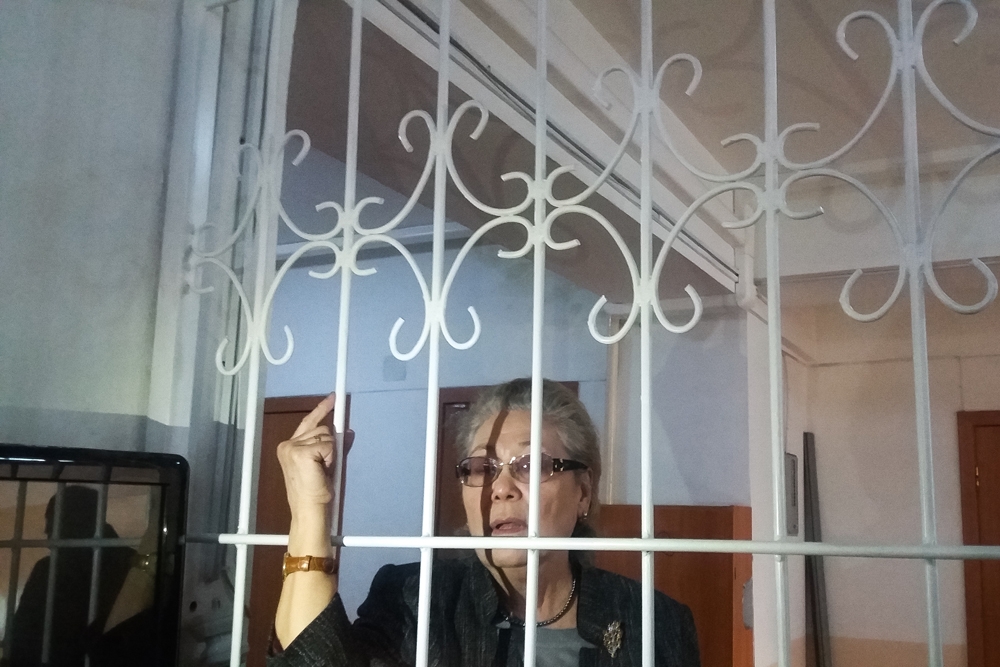 Authorities in Kazakhstan have flexed their muscles in an attempt to rattle their critics, only to produce an anarchic trial that is making martyrs of largely marginal opposition figures.

Security was unusually tight on January 8 at the Almaty court where Serikzhan Mambetalin and Yermek Narymbayev are on trial on charges of inciting ethnic enmity via postings on Facebook. A hearing earlier in the week was suspended when sympathizers disrupted proceedings with cacophonous protests over how the men were being treated.

Concern is intense over Narymbayev’s state of health. He was rushed to the hospital in an ambulance on January 6, before being returned to court to continue the trial against his will, prompting ill-tempered outbursts from the gallery.

Judge Maral Dzharilgasova reacted to the interruptions by closing the courtroom to all but prosecutors, lawyers and public defenders. A video link was provided in a separate room for people wishing to follow proceedings on January 8.

Before arguments began during the latest hearing, Narymbayev, who suffers from high blood pressure and a heart condition, could be seen slumped immobile over the dock. His head and arms hung loosely by his side as wrangling continued outside over who could access the courtroom. Supporters chanted “Yermek, Yermek!”

“I came especially from Astana overnight,” Yersain Narymbayev, the distraught father of one of the defendants, told EurasiaNet.org at the gates blocking access to the courtroom, as police looked on. “They’re not letting me in. I consider the ruling [to restrict access to an open trial] to be illegal altogether.”

Hearings lasted from the morning well into the evening as witnesses were queried at length, among other things, about the purpose of Facebook — an ordeal for a defendant in visible discomfort. Like other critics of the proceedings, the defendant’s father believes the trial of the two civil society campaigners — which began in December — is politically motivated.

“They’re trying to put them away for 10 years, because in their speeches they’ve always spoken out about our country’s faults,” Yersain Narymbayev said.

Although the defendants have indeed been long-term critics of President Nursultan Nazarbayev’s rule, their public profile is relatively low. With street-based politics almost entirely sidelined, opponents of government policy are primarily confined to cyberspace. Mambetalin and Narymbayev are active online dissenters, but wield little on-the-ground influence to rally crowds against the government — particularly as Astana tolerates no unauthorized rallies or protests.

In 2014, police arrested Narymbayev on an Almaty street as he attempted, with limited success, to encourage passersby to wear surgical masks as a sign of opposition to Kazakhstan’s membership in the Russia-led Eurasian Economic Union trading bloc. Mambetalin is a notoriously spiky online presence who formerly led the opposition Ruhaniyat party, but fled the country in early 2012 over fears that he was about to be arrested.

The two were arrested in October on charges of fomenting ethnic strife after writing Facebook postings related to an unpublished book written some two decades ago by another anti-government activist, Murat Telibekov.

Telibekov is the object of a separate — and stalled — inquiry on a criminal charge of stoking ethnic, religious or social enmity. The charge has previously been used to jail opponents of the regime, and is punishable with a fine or up to 12 years in jail.

Outside the court, Telibekov showed a EurasiaNet.org correspondent a hand-printed copy of the offending book, a whimsical Russian-language collection of poetry and essays, titled Wind from the Street, which he tried unsuccessfully to publish 20 years ago.

Telibekov maintains he did not even write the excerpt of his book that has landed Mambetalin and Narymbayev in court after they re-posted it, and said that it was added to an online version of his writings by an unknown hand.

Although Telibekov is no friend of the defendants, who were critical of his writings in the Facebook postings that landed them in court, he also deems the proceedings politically motivated.

“This is just a pretext — the real reason is quite different,” he said.

Human rights activist Yevgeniy Zhovtis, who was present in court to support the defendants, suggested this might be a test case ahead of trying times for the government. “[Authorities] are trying, in the context of the socioeconomic situation, to warn everyone and put pressure on everyone who can rally public opinion,” Zhovtis, Kazakhstan’s most prominent civil rights campaigner, told EurasiaNet.org.

Kazakhstan looks set to experience a potentially prolonged economic slump as global prices for oil, the country’s main export commodity, sink to levels unseen in the past decade. A population once used to regular bulletins of growing prosperity is instead facing a prolonged period of economic uncertainty with high inflation and a severely devalued currency.

That has combined to put a chill on the political environment and made even passing remarks on social media fair game for prosecutors.

“This is a show trial,” civil society campaigner Galym Ageleuov told EurasiaNet.org. “We have now retreated so profoundly into authoritarianism that those citizens who still try to express their opinions and exercise their right to freedom of speech are subject to persecution.”

Officials in Astana deny that they pursue politically motivated prosecutions.

The hearing on January 8 eventually got under way after a failed motion by Mambetalin seeking the replacement of the judge, and one by Narymbayev to have the case adjourned. The two only had their handcuffs removed after supporters signed a petition in protest to be sent to the Supreme Court.

After 10 hours of hearings, the trial was adjourned to January 11.