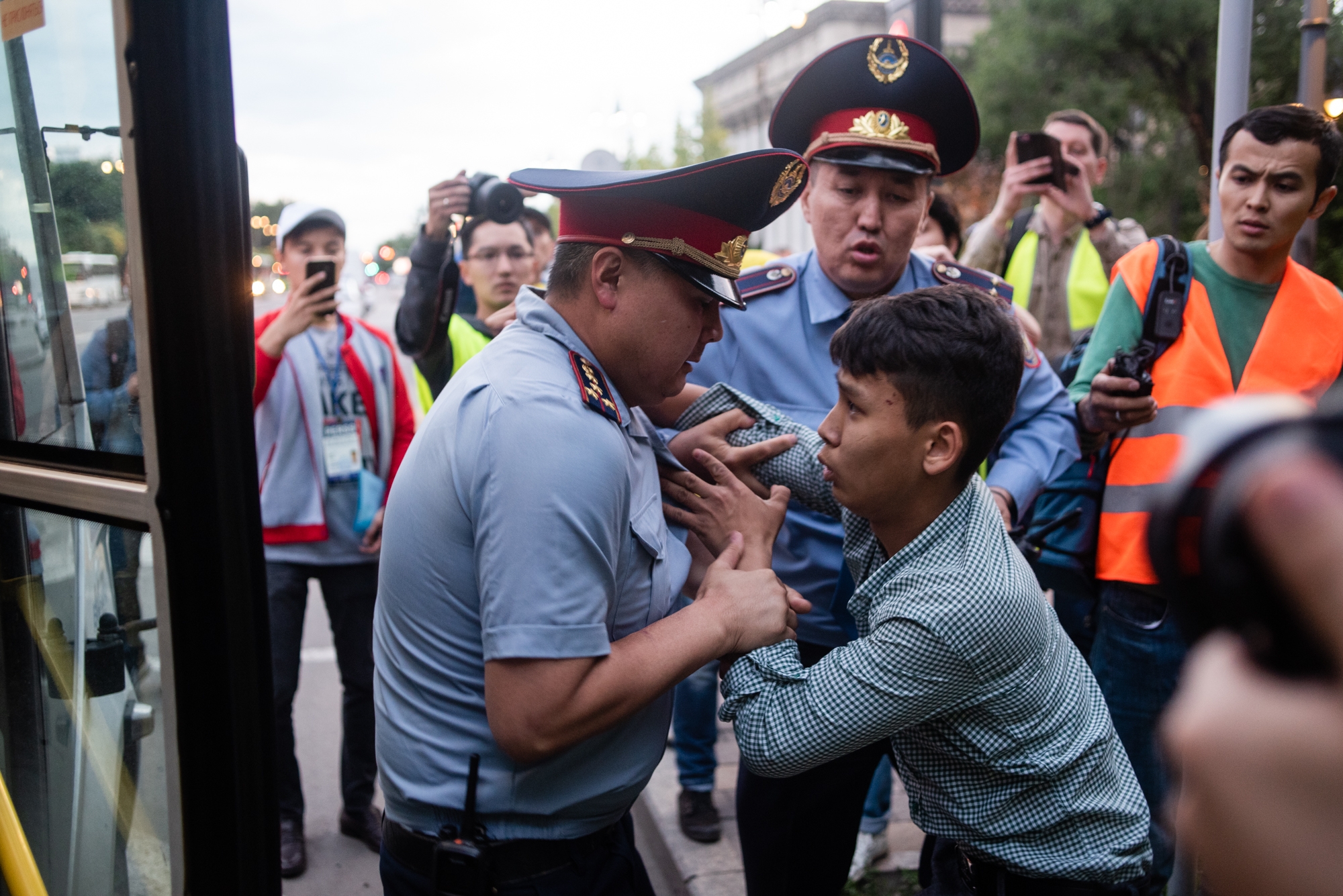 Now you see it: A policeman detaining a young man during an abortive demonstration in Almaty on June 12. (Photo: Danil Usmanov)

Law enforcement officials in Kazakhstan have produced a report card for their week of confrontations with anti-government protestors and given themselves top marks.

Witnesses at the site of multiple unauthorized but peaceful demonstrations robustly broken up by police, who include Eurasianet correspondents, and the United Nations are unconvinced.

Saparbek Nurseipov, a representative of the General Prosecutor’s Office, said on June 13 that 957 people have incurred sanctions for their involvement in the assemblies.

“Of those, 670 were arrested. Another 115 people were fined. And 172 people received warnings,” Nurseipov said.

As of the time that Nurseipov spoke, 180 people still remained in custody.

There is still some disagreement about whether those numbers reflect the full picture, but it is characterization of the detentions by officials that will cause most consternation.

To begin with, police have denied that they have detained people at random.

“[They] were all detained during an unsanctioned meeting summoned by the extremist organization [Democratic Choice of Kazakhstan], and they were detained for actively resisting law enforcement bodies and for violating Kazakhstan’s laws on the holding of so-called meetings,” deputy Interior Minister Marat Kozhayev was quoted as saying by Sputnik news agency, referring to rallies on June 9 and 10.

Eurasianet correspondents in Almaty saw, however, how police over several days dragged away civil society activists monitoring events from the sidelines, accredited journalists and even passersby.

The Interior Ministry went further to say nobody was detained during demonstrations on June 12.

“We engaged in preventative conversations on the street. Nobody was taken away in paddy wagons,” Maksat Baibolov, chairman of the Interior Ministry’s administrative police committee, was cited as saying by Zakon.kz. “We detained nobody.”

As the photo accompanying this piece, which was taken in Almaty on June 12, illustrates, this was a flat-out falsehood.

Kazakhstan’s hard line against all forms of anti-government demonstrations has not gone unnoticed by international organizations. Ryszard Komenda, head of the United Nations Human Rights Office for Central Asia, described the authorities’ refusal to permit peaceful protests as “extremely regrettable.”

"The freedom of expression and peaceful assembly are the building blocks of successful and vibrant societies. Any attempt to restrict them unnecessarily and without proper justification constitute risks for stability and social cohesion,” Komenda said.

Komenda said his office has also been apprised of the fact that many detainees were put through expedited court procedures in police stations without the assistance of a defense lawyer.

Nur-Sultan justifies its zero-tolerance stance by pointing to legislation that designates participation in an unauthorized assembly as an administrative offense. They strive to additionally criminalize the conduct of those who attend rallies by insisting that demonstrators are acting at the behest of the Democratic Movement of Kazakhstan, or DVK, a banned political group created by exiled government foe Mukhtar Ablyazov, who has made little secret of the fact that he wishes to see regime change.

But it is uncertain how many people attend rallies out of sympathy with Ablyazov’s positions or just to express their dissatisfaction with the ruling order. Opposition parties have all been either deregistered or banned, limiting avenues for members of the public to express their objection to government policies. Journalists are as a rule unable to question rally participants about their political sympathies since roving groups of police officers grab demonstrators within moments of them appearing on the scene.

At the several protests seen by Eurasianet correspondents, demonstrators were almost universally peaceful and carried, if anything, only small flags or balloons.

On June 12, however, the General Prosecutor’s Office uploaded a video to YouTube seeking to cast the demonstrations of the past week as predominantly violent affairs. In the collated footage, which is scored to dramatic-sounding music and carries a watermark reading “no comments,” a commentator advises viewers to “note the provocateurs throwing stones.” No explanation is provided as to where, when and in what circumstances the footage was filmed.